"I will always remember the first sentence we heard when we came here - Filip has potential," recalls Filip's mother Ana from Mostar, whilst dad Toni emphasizes the importance of the support they received as parents.

Mom Ana and Dad Toni are looking forward to the start of the new school year when their son Filip will enroll in the first grade of elementary school. We met them while attending the last meeting of the group of parents of children with detected developmental disabilities, who, in addition to their regular stay in the kindergarten, receive support through the Education for All-EDUS program. The programme has been successfully implemented in six kindergartens of the Institution "Kindergartens" Mostar with the financial support of UNICEF Bosnia and Herzegovina. Filip and his parents were among the first to join the program, and now that he is starting school, they have come to share their experiences with other parents.

During one of their regular visits to the pediatrician, they noticed that Filip had certain speech impairments. Ana found out about the EDUS program, being implemented in Sarajevo, and soon was told that the program had started in Mostar as well:

“We came here when Filip was 18 months old and have been closely working together ever since. When I talk about everything with other parents, I realize how much we have been through the last seven years. I still remember the first sentence we heard when we came here - Filip has potential. It change everything for better. With all the professional support that Filip received, the support and instructions we, as parents, received from the professionals also meant a great deal to us".

They exchanged experiences at parent meetings because they claim, they understand and support each other the best:

“There is a strong sense of humanity, we saw that appropriate care was taken, that the child and the welfare of the child come first. It meant a lot to us that we have a program of an early intervention, in our local community.” adds Ana.

Filip’s father Toni says coming to kindergarten and enrolling Filip in the early intervention programme was "the beginning of salvation" for them:

"Without the work and patience of everyone here, we wouldn’t have these results. It is important not to give up and work, and we said to ourselves at the beginning - there is no giving up, roll up your sleeves and persevere. Now Filip is starting regular schooling without an assistant. We need to work with the parents and tell them the truth immediately so that they can start working with their child on time,” says Toni.

Soon other parents at the meeting join in the conversation and share their experiences. One of the mothers said that her son was a calm and withdrawn child and that at first, they did not notice that he had difficulties, until it was detected in the kindergarten, which he has been attending for a year. Now, his progress has been noticeable. The parents are satisfied with the approach of educator, while many improvements in speech and socialization are seen with children.

Jasmin also shared his story, saying that his daughter had problems with speech, communication and cognitive skills:

“We fortunately came in time, and soon we noticed progress in speech and understanding. Our daughter Nela has a younger brother and helps him a lot. It would have been a huge mistake if we had not come here, because who knows where we would be now. There were moments when we hesitated, but then the educators told us ‘Don’t give up, it’s best for your child!’, And so it was. Between Nela from 3-4 years ago and Nela now, there is a huge difference and progress, and she has become an exemplary child, just like Filip ", says Jasmin.

Ana and Toni agree that the parent meetings were especially important as a kind of therapy, a hub where they could share their experiences, hear the experiences of others, or just talk to people who felt their concerns. Additional peace of mind was provided by the fact that they knew that they had intervened in time and that support through early intervention was continuous and comprehensive.

Filip was first sent to the nursery, then trained and prepared for an older nursery group in which he received support and preparation for kindergarten, and his parents point out that since he was three and a half years old, he has been in the regular kindergarten program, where he had individual work twice a week, with support from a speech therapist, psychologist and educational rehabilitator. They emphasize that they also had all the necessary support and communicated with everyone from the program daily.

"Not everything was easy in the beginning. But day by day, we were able to see the progress. One day I saw him sitting with Magdalena and cutting paper with scissors, all focused, and I thought to myself - there is something here, there must be some of it. And it was. Filip is now going to school, he is looking forward to it and we hope that he will fit in.,” says dad Toni, and Filip, after bragging to us that he has the most beautiful parents, posed with them.

The director of the Institution "Kindergartens" Mostar, Danijela Kegelj, moderator and active participant in the parent meeting we attended, emphasizes through conversation that in early detection and intervention the emphasis is on it being - early.

"We see from practice that the intervention should start as early as possible. Early intervention is one of the most comprehensive methods aimed at developing a child's skills. Support for parents is also important because parents are the main allies in early intervention. That is why meetings with parents that we organized more often before the COVID pandemic are very important. It is important that parents have space where they can share their experiences, empower each other, and it is important to continue intensive cooperation ", says Danijela.

The importance of supporting parents is also emphasized by psychologist Marijana Tomić, who also attends the meeting:

“I wish there could have been even more parent meetings because a parent will tell things to a parent more easily than open up to us. It is important to us that the parents are happy, that they did not give up, and we are grateful for their trust. "

Danijela emphasizes the importance of the program, interventions in early growth and development and comprehensive work with children:

"Everyone needs support, and we initially received it from UNICEF, which sent us to training, equipped our premises and was a 'supporting hand' all these years. We realized that education does not serve someone to do something for us, but that we need to apply what we have learned and work ", says Danijela, adding that at the beginning there was a kind of resistance to this work and approach since they were a kind of novelty, but that has become more and more accepted and recognized in the local community over time. She emphasized the importance of having a system that allows the child to be monitored from the outset and allows each step, the child's life path, to be documented in detail:

"From the beginning, we want all children to be included in regular groups, and to have all the support. In addition to everything we do here, the symbiosis with health centres and the hospital is also important. We also strive for children outside kindergarten to have access to treatments and to become a community service that will be at everyone's service,” adds Danijela.

Resource rooms are equipped in the six kindergartens of the Institution because the concept is that children stay undisturbed in the kindergarten and that they do not have to move out of the environment in which they stay. In these rooms, the children have individual work twice a week with the staff who visit them on a schedule, and the rest of the time they stay in a group with teachers who work with them on assignments from the professional team.

Psychologist Marijana Tomić, educational rehabilitator Magdalena Perić-Bralo, speech therapist Ana Soldo and Ivana Talić, work with the children in the program. Danijela also emphasizes the importance of cooperation with the Study of Speech Therapy at the Faculty of Philosophy in Mostar:

"Our goal is to be present in the community in that way and to give the opportunity to students to learn and work through practice. Their enthusiasm is felt, they work, they pay full attention and you feel the freshness they bring ", says Danijela, and Ivana adds that working with children fulfils her, and emphasizes the importance of practical work with children, both professionally and personally:

"I learned a lot in university, but the learned theory is one thing, and practice is another, because when you come here and stand in front of a child, you see how much theory you need for practice, but also that now everything you have learned needs to be applied."

Danijela concludes that a lot has been done so far, but she is also aware that much more effort and involvement of everyone is needed in the future to make the process complete:

"All you have seen and talked about is inclusion, but everyone must understand that inclusion is an integrated, multisectoral and long process.  A lot has been arranged, a strong foundation has been laid and many things are already functioning, I hope that in the future schools will take over this program to a greater extent, but also that the system will recognize the importance of such an approach and put this universal concept in the legal and budgetary framework. "

Since 2010, UNICEF BiH has supported the introduction of innovative Early Growth and Development Services in BiH integrated into the health, education and social protection system, including a joint intervention in this area supported by the Austrian Development Agency (ADA) and implemented with local partners. Research has shown that children, who have been through the intervention, have shown better developmental results, better mother-child interaction has been established, stress levels in both parents and children have been reduced, and the feeling of well-being was higher compared to those who did not have the same opportunity. 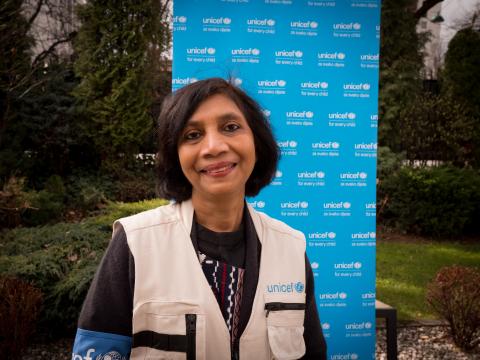 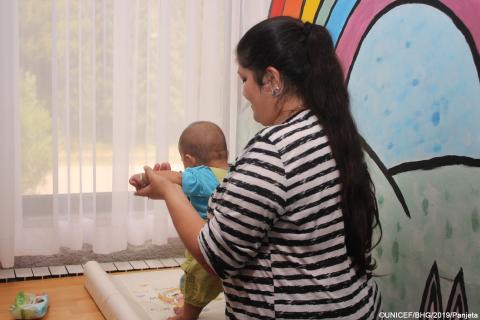 Breasteeding is the best way of feeding babies.

Both my girls were breastfed, as is little Amar now; it's the natural and best way to feed babies." 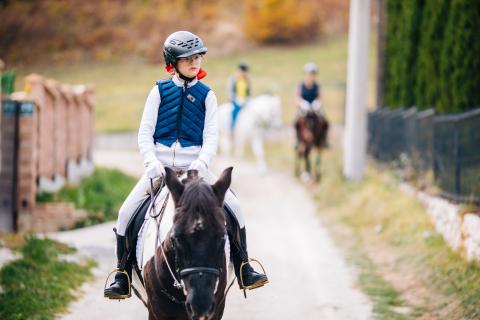 Ajna, a true champion: clearing all hurdles and obstacles

Positive environment for happier growing up 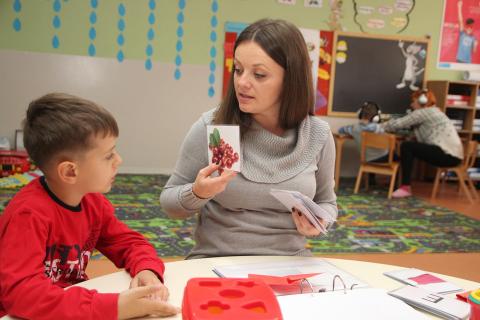 Children get better support with empowered and stable parents