Water- and sanitation-related diseases are one of the leading causes of death for children under five.

Over 11 per cent of child deaths in Sudan caused by diarrhoea, attributed mainly to poor sanitation, water and hygiene. Two million children in Sudan suffer from acute malnutrition, 50 per cent of which is associated with repeated diarrhoea or worm infections.

With nearly a third  of households (over 10 million people) practicing open defecation, Sudan has the highest prevalence of open defecation in the Middle East and North Africa region, posing grave public health risks to transmission of diseases such as cholera, diarrhoea, dysentery, hepatitis A, typhoid and polio. Open defecation is a manifestation of multi-sectoral deprivations be it poverty, malnutrition, education (see map) and affects women/girls disproportionately.

Only a third of the households having access to proper sanitation; while about 68 per cent of households have access to improved drinking water sources. Taken together just about a third have simultaneous access to water and sanitation in the country with wide disparities between states; between urban-rural and between the richest and poorest.

Access to WASH in Institutions (schools and primary health centres) is also limited. Two thirds of the existing schools do not have improved sanitation facilities and a quarter of them do not have access to clean water. This is further compounded by the lack of gender segregated sanitation facilities including for menstrual hygiene management; and ease of access to the physically disabled children. This negatively impacts children’s attendance and enrollment, especially girls. 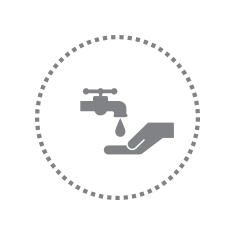 Sanitation continues to be a low national political and budgetary priority

UNICEF collaborates with government, civil society organizations and development partners in its relentless pursuit to eliminate open defecation and accelerate access to basic water, sanitation and hygiene services for all children in Sudan with emphasis on the most vulnerable.

WASH interventions will be part of a comprehensive package to ensure Child Survival and Development. UNICEF will strengthen the linkages between humanitarian, development and peacebuilding efforts in Sudan including Integrated Water Resources Management approach and climate change adaptation to WASH interventions. UNICEF will strongly engage in upstream policy dialogue, support national strategies and SDG-6 agenda with the aim of planning and contributing to strengthening systems and capacities at the national and sub-national level while empowering communities.