As evacuees, Kababay Maknong, 17, and Datu Nor Zukarno, 21, need psychosocial support, but instead of seeking it from other people, they are giving it to their peers and younger children. They volunteer as youth animators in Mamasapano town, Maguindanao province.

During weekdays, Maknong and Zukarno spend a few hours facilitating games at Libutan Elementary School (LES), which serves as an evacuation center to families affected by an armed conflict. They also regularly visit the young evacuees who had gone back to their homes.

“I feel fulfilled with what I do,” says Maknong. “The children are fun to be with. They have a lot of energy. They don’t want the games to end.”

“I didn’t know that I could be a leader,” says Zukarno. “Before, I rarely joined youth activities, much less talk in front of a crowd. Now I’ve gained some confidence.”

UNICEF, together with its implementing partner, Community and Family Services International (CFSI), initiated and supports the psychosocial intervention.

“I didn’t know that I could be a leader. Before, I rarely joined youth activities, much less talk in front of a crowd. Now I’ve gained some confidence.”

The intervention began after thousands of residents flocked to evacuation centers in Maguindanao on March 18. They fled their villages to avoid the armed conflict between government soldiers and Bangsamoro Islamic Freedom Fighters (BIFF).

“This school alone sheltered 330 families at the height of the conflict,” says Danny Dimalilay, the camp manager at LES. “Right now, there are 111 families left.” He explains that the number changes because people go back to their homes whenever the fighting subsides. “Some of them spend the day at home and spend the night here,” he says.

Dimalilay selected the four youth animators from his camp, including Maknong and Zukarno. The four volunteers serve Libutan and nearby villages.

“For the entire province of Maguindanao, we’ve tapped 26 youth animators,” shares Meriam Acob, CFSI project coordinator. “The animators are 15 to 24 years old, and they help those who are 11 to 17 years old.” She adds that CFSI aims to increase the number of youth animators to 45.

The youth animators in Maguindanao underwent a two-day training in Shariff Aguak town, and they learned about psychosocial support, children’s rights, protection from gender-based violence, COVID-19 prevention and other related topics.

“The training equipped me with the knowledge and skills that I need to give psychosocial support to younger evacuees,” says Zukarno. “Some staff of CFSI also supervise the activities that my fellow animators and I conduct. We ask for help from them whenever we need to.”

“Volunteers are chosen among the evacuees to ensure meaningful participation and engagement of the affected population,” says Sitti Vilma Quin, UNICEF child protection officer. “Psychosocial support interventions are effective when they are community-led. Also, youth are included because they can provide a more sensitive and relevant support to their peers and younger children.”

“Psychosocial support interventions are effective when they are community-led. Also, youth are included because they can provide a more sensitive and relevant support to their peers and younger children.”

As an evacuee herself, Maknong could identify with the concerns of other children, especially girls. “I now stay at home, and I did not experience or witness gender-based violence while I was in the evacuation center, but I sometimes felt uncomfortable,” she says.

“Three to four families had to share a room, so there wasn’t much privacy,” she adds. “It could be difficult to change clothes and do a few other things.”

She has observed that by interacting with evacuees her age and younger, she’s able to adjust to changes and handle her worries. “Every day, I look forward to being with the children,” she says. “Being able to help them makes me happy.”

“The youth in the community, while affected by the armed conflict and occasional displacement, are still able to give support to their fellow youth,” says Acob. “They can effectively reach out to their fellow youth as they have relatively the same experiences. They can relate with each other.”

Aside from training and supervising the youth animators, UNICEF and CFSI also provide the recreational kits that the children use, such as volleyballs, soccer balls, chess boards, jumping ropes, and red and blue vests that the children wear when they are divided into two teams.

Vincent Cuales, head of the Municipal Disaster Risk and Reduction and Management Office, notes that several government agencies and non-governmental organizations conduct relief operations in Mamasapano but only UNICEF and CFSI provide psychosocial intervention. “It’s a big help especially to the children,” he says. “Their trauma is alleviated.”

Shahani Mohamad, head of the Municipal Social Welfare and Development Office, agrees. “When you look at the children, they seem oblivious to the conflict,” she says. “They still play and eat, but deep inside, they’re bothered. They’re used to the fighting to some extent, but it doesn’t mean that they’re not affected. Intervention is really needed.”

“When you look at the children, they seem oblivious to the conflict. They still play and eat, but deep inside, they’re bothered. They’re used to the fighting to some extent, but it doesn’t mean that they’re not affected. Intervention is really needed.”

UNICEF and CFSI hope that the youth animators will continue to serve their communities even after the program has ended.

“The volunteers were selected carefully,” says Acob. “Even before they were engaged by CFSI, most of them have been members of youth-led organizations or active members of the community. When CFSI exits, they will remain and continue conducting activities that will help enhance the psychosocial and general well-being of their fellow youth.”

She also shares that as early as now, other non-government organizations operating in the area have started to include in their own projects the youth animators trained by UNICEF and CFSI.

“It can be expected that as the youth animators engage in other activities, they will continue to adopt the psychosocial approach,” says Acob.

Maknong and Zukarno are in senior high school and have to read and answer their self-learning modules, but they don’t see their volunteer work as an additional burden. “Whenever I see the children smile, I feel satisfied,” says Zukarno. 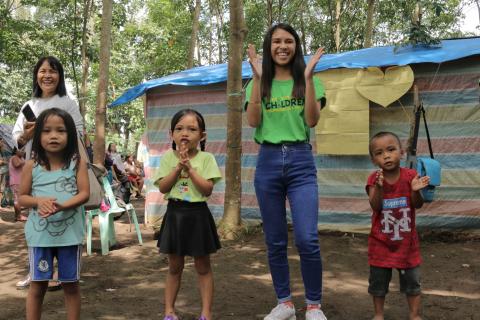