Another 1.9 million babies were tragically stillborn during the same period, according to a separate UN report.

NEW YORK/GENEVA/WASHINGTON D.C., 10 January 2023 – An estimated 5 million children died before their fifth birthday and another 2.1 million children and youth aged between 5–24 years lost their lives in 2021, according to the latest estimates released by the United Nations Inter-agency Group for Child Mortality Estimation (UN IGME).

In a separate report also released today, the group found that 1.9 million babies were stillborn during the same period. Tragically, many of these deaths could have been prevented with equitable access and high-quality maternal, newborn, adolescent and child health care.

In the Philippines, over 60,000 children die annually before their fifth birthday because of complications of premature birth, intra-partum complications, and infectious disease. More than 25,000 babies are stillborn every year. The Philippines needs to increase access to quality maternal and child health and nutrition services, achieve full vaccination of all children, and deliver on commitments for ensuring good health and nutrition through the first 1,000 days of life so that children will not only survive, but thrive. In the Philippines, almost 60% of children who die before their fifth birthday are newborns, pointing to a need to improve health and nutrition outcomes for both mothers and babies.

“Every day, far too many parents are facing the trauma of losing their children, sometimes even before their first breath,” said Vidhya Ganesh, UNICEF Director of the Division of Data Analytics, Planning and Monitoring. “Such widespread, preventable tragedy should never be accepted as inevitable. Progress is possible with stronger political will and targeted investment in equitable access to primary health care for every woman and child.”

The reports show some positive outcomes with a lower risk of death across all ages globally since 2000. The global under-five mortality rate fell by 50 per cent since the start of the century, while mortality rates in older children and youth dropped by 36 per cent, and the stillbirth rate decreased by 35 per cent. This can be attributed to more investments in strengthening primary health systems to benefit women, children and young people.

However, gains have reduced significantly since 2010, and 54 countries will fall short of meeting the Sustainable Development Goals target for under-five mortality. If swift action is not taken to improve health services, warn the agencies, almost 59 million children and youth will die before 2030, and nearly 16 million babies will be lost to stillbirth.

“It is grossly unjust that a child’s chances of survival can be shaped just by their place of birth, and that there are such vast inequities in their access to lifesaving health services,” said Dr Anshu Banerjee, Director for Maternal, Newborn, Child and Adolescent Health and Ageing at the World Health Organization (WHO). “Children everywhere need strong primary health care systems that meet their needs and those of their families, so that – no matter where they are born – they have the best start and hope for the future.”

“Behind these numbers are millions of children and families who are denied their basic rights to health,” said Juan Pablo Uribe, Global Director for Health, Nutrition and Population, World Bank and Director of the Global Financing Facility. “We need political will and leadership for sustained financing for primary health care which is one of the best investments countries and development partners can make.”

Access to and availability of quality health care continues to be a matter of life or death for children globally. Most child deaths occur in the first five years, of which half are within the very first month of life. For these youngest babies, premature birth and complications during labour are the leading causes of death. Similarly, more than 40 per cent of stillbirths occur during labour – most of which are preventable when women have access to quality care throughout pregnancy and birth. For children that survive past their first 28 days, infectious diseases like pneumonia, diarrhoea and malaria pose the biggest threat.

While COVID-19 has not directly increased childhood mortality – with children facing a lower likelihood of dying from the disease than adults – the pandemic may have increased future risks to their survival. In particular, the reports highlight concerns around disruptions to vaccination campaigns, nutrition services, and access to primary health care, which could jeopardize their health and well-being for many years to come. In addition, the pandemic has fuelled the largest continued backslide in vaccinations in three decades, putting the most vulnerable newborns and children at greater risk of dying from preventable diseases.

The reports also note gaps in data, which could critically undermine the impact of policies and programmes designed to improve childhood survival and well-being.

“The new estimates highlight the remarkable global progress since 2000 in reducing mortality among children under age 5,” said John Wilmoth, Director, UN DESA Population Division. “Despite this success, more work is needed to address persistent large differences in child survival across countries and regions, especially in sub-Saharan Africa. Only by improving access to quality health care, especially around the time of childbirth, will we be able to reduce these inequities and end preventable deaths of newborns and children worldwide.” #####

The two reports – Levels & Trends in Child Mortality and Never Forgotten – are the first of a series of important data sets released in 2023, with UN maternal mortality figures to be published later this year.

The United Nations Inter-agency Group for Child Mortality Estimation or UN IGME was formed in 2004 to share data on child mortality, improve methods for child mortality estimation, report on progress towards child survival goals and enhance country capacity to produce timely and properly assessed estimates of child mortality. UN IGME is led by UNICEF and includes the World Health Organization, the World Bank Group and the United Nations Department of Economic and Social Affairs, Population Division. 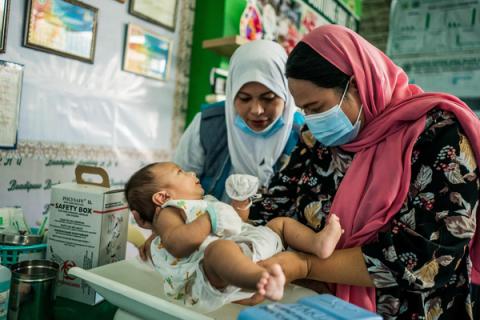