Rural Damascus, Syria, Jan-Feb 2021 – Ten long years of crisis, displacement and loss have taken their toll on the lives and livelihoods of families in Syria, leaving especially those dependent on modest incomes more vulnerable than ever. In rural Damascus, and across Syria, children and families have had to struggle through the recent economic downturn coupled with COVID-19 challenges.

To help them cope, UNICEF is reaching the most vulnerable of those families, especially those residing in informal and severely war-damaged neighbourhoods, with one-time emergency cash transfers. The Cash for Basic Needs programme aims to support families provide for their basic needs amid current economic hardships.

As soon as Yusra opens the door of her home at the once-conflict-affected neighborhood in Babbila in Rural Damascus, the smile of her one-year-old daughter Bayan outshines everything around her despite all that she and her family are living through.

“Instead of diapers I am using plastic bags and toilet paper for her. I can’t afford diapers anymore,” says Yusra, Bayan’s mother.

Yusra’s family shares one house with the family of her in-laws. Her husband works at a local bakery, earning a very modest income that he uses to provide for three families, his own and two of his extended family. On many days all three families survive on mere bread and tea, as they cannot afford much else.

Yet, the one-year-old Bayan smiles despite having had to go through a cold winter, barely able to keep warm in their windowless home with its cracked door frames and the few blankets the families sharing the household own.

Like Bayan’s family, the family of three-year old Bara’a has been surviving on the bear minimum. Her family shares the same living space with three other families and only one breadwinner for the four of them.

"I feel sad every time my daughter asks for a biscuit," says her mother. Milk, fruits and even vegetables have become unattainable to the family, let alone meat or poultry.

For the family of the two-year-old Sami, who were displaced to Babbila from Deir-ez-Zor three years ago, the challenge of obtaining their daily basic needs is similar. Sami’s father, who earns a meagre income carrying goods in the local market, is barely able to make ends meet. The past months have been especially difficult. The economic downturn and COVID-19 related restrictions meant that his earnings declined even more, pushing the family’s food security to a critical point.

UNICEF/ Syria 2020/ Johnny Shahan
Sami, 2, sitting by the door of his home in Babbila, rural Damascus, while his father registers for UNICEF’s Cash for Basic Needs programme.

Making a difference in children’s lives

Over the past months, many of the families visited by the UNICEF-supported case managers, have been sustaining themselves on bread and tea for food. The cash transfers supporting these vulnerable families and their children to provide for their most basic needs is a literal lifeline.

“It is very difficult to see the dire situation the families we visit are living through, but the mere act of visiting them and hearing them out helps them feel that they are not forgotten,” says Manal, 36, one of UNICEF-supported case managers responsible for registering families in the Cash for Basic Needs programme.

“We knock on every door and leave written notes for those who don’t answer to make sure that no eligible family is left behind,” adds a Quteifa Health Charity staff member, UNICEF’s implementing partner of the programme in Babbila.

Thanks to the generous contribution from Kuwait Fund for Arab Economic Development, over 6,700 families with children in rural Damascus have received cash transfers through the programme so far this year. Each of them received an 80,000 SYP emergency transfer to support them to cope with the economic hardship and increased cost of living or loss of income due to the negative impacts of COVID-19 global pandemic. As part of the programme, every family is also assigned a case manager for three months to support them with referrals to other services they might need, including documentation of unregistered children or those whose documentation was delayed for various reasons.

“I bought milk and diapers for Bayan. Finally, she sleeps well at night and her skin has recovered from the rashes she used to have,” says Yusra, Bayan’s mother, one month after having received the cash assistance.

“Now I can have some peace of mind for a while. I have now stocked up some food at home for the children,” says Ayman, a retired father of four who received UNICEF’s Cash for Basic Needs last month. “They need clothes too, but my wife and I decided to prioritize food. The kids used to sleep on empty stomachs many nights,” he adds. Ayman’s family had been displaced several times over the past six years and currently they reside in Babbila relying on humanitarian aid to survive.

Food was also prioritized by Rabi, father of two. Ten years ago, Rabi’s family fled Babbila due to the violence, seeking shelter in Lebanon. But as the economic crisis in Lebanon grew more acute, they had to make the difficult choice and return to their home in Babbila. “I stocked basic food items; oil, rice and sugar,” says Rabi, who earns a modest income from the glass shop he works at. “Now we would at least have food if I lost my job in this crisis,” he adds. 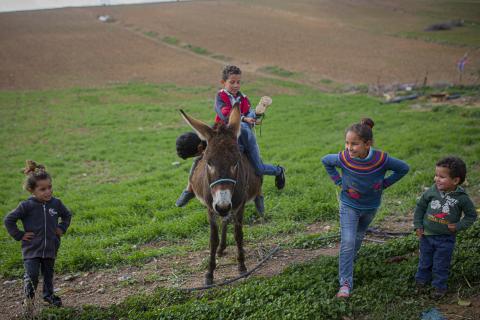 Building resilience for Tunisia’s most vulnerable 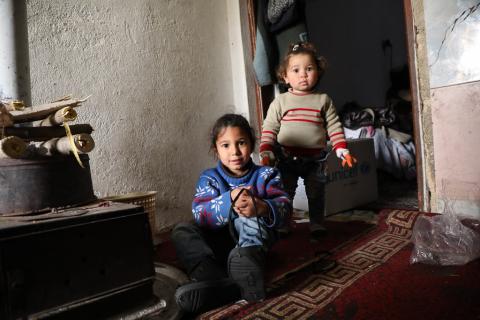 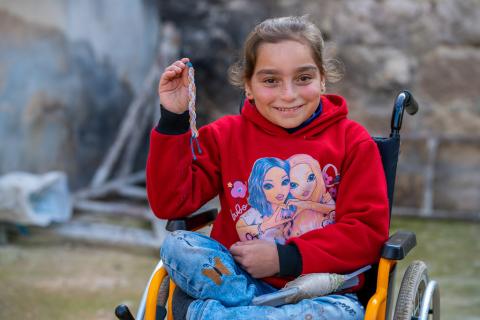 After resuming her learning and with help from UNICEF’s ‘Cash for Disability’ programme Rasha realizes her limitless potential.