UNICEF steps up treatment of children with malnutrition in Tigray Region

Since November last year, UNICEF has provided WASH, health, nutrition, and child protection assistance for people affected by the conflict.

Worke Tsegaye, 20, is one of many young mothers who have come to the Internally Displaced Persons (IDPs) camp to have their children treated for malnutrition. She says her two-year-old child, Desta Eshete, was not feeling well and had been crying all the time. After being screened at a mobile clinic set up in the camp by the International Rescue Committee (IRC), a UNICEF partner, the child was found with severe acute malnutrition (SAM) and placed on treatment. Worke was also screened and found with moderate acute malnutrition (MAM).

The IDP site in Mai Tsebri is home to 8,500 people who fled their homes when conflict erupted in the Tigray Region in November last year. Worke left her home in Korarit, north-western Tigray in November and arrived in Mai Tsebri in January 2021.

“We were so scared of the conflict and everyone left the town all at once. We moved from one place to the other until we reached in Mai Tsebri. It was difficult.”

However, her husband refused to come with her, saying he didn’t want to leave his birthplace.

“I don’t know if he is alive. I have no means of reaching him,” she says.

Worke does not live in the IDP camp, choosing instead to rent a house with her mother who is a monk.

“It takes an hour to come here to the camp from the place I live now in called Hadinet.”

She however comes to the IDP site daily to access services, such as water, health care, and hygiene supplies.

“I was given two jerry cans, a cooking utensil, and two sleeping mats,” she says.

“My son has been having a constant fever. When I took him to the health centre, I was asked to pay 14 Ethiopian birr (USD 0.34) which I could not afford, so I left without receiving treatment. But when I heard that a mobile clinic had been set up here, I immediately brought him for treatment”, she says.

After baby Desta was diagnosed, her mother Worke was given 21 sachets of Ready-to-Use Therapeutic Food (RUTF) for treating malnutrition.

“Your baby needs to consume three sachets of the RUTF every day for seven days,” Berhe informs Worke. “You need to bring him back after one week for assessment.”

As the clinic had run out of paracetamol, Berhe asked Worke to come back in the afternoon to have her baby’s fever treated.

“The good thing is that we don’t have problems treating common childhood diseases like fever. IRC/UNICEF are providing us with all the necessary drugs to treat children. What we are lacking is essential drugs to treat adults,” says Berhe.

“For example, we have screened 54 pregnant and lactating women today and 26 have moderate acute malnutrition. And from the 205 children screened for malnutrition this morning, 139 are moderately malnourished.”

Berhe says that the clinic’s services are overstretched by demand also from the host community.

“When we’re overwhelmed, we give priority to the IDPs and ask people in the host community to come back later. We have an obligation to treat everyone. We can’t say no to them,” he says.

Between 5-9 April, data shows that 643 children had been screened for malnutrition; 75 (12%) were diagnosed and treated for SAM and 146 (23%)diagnosed with MAM. In addition, three children with underlying complications were referred for treatment at a stabilization centre at Mai Tsebri Hospital.

In the same period, the mobile clinic screened 187 pregnant and lactating women and 100 (53%) were moderately malnourished. The clinic had reached 918 mothers with health education.

According to UNICEF humanitarian situation report, an estimated 38,758 people in Tigray were reached through the 22 active Mobile Health and Nutrition Teams (MHNTs), out of whom 11,594 were children who received medical consultations, nutrition services, and immunization in the past three months.

The Ready-to-Use Therapeutic Food (RUTF) and therapeutic milks, which are essential for treating children with acute malnutrition, have been supplied with funding from the United States Agency for International Development while the emergency drug kits are procured through funding from the UK government.

“All I have now is my son and my mother. I hope my son feels better and we get back home to live our normal lives,” says Worke. 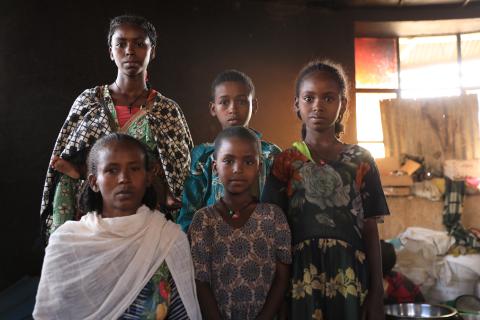 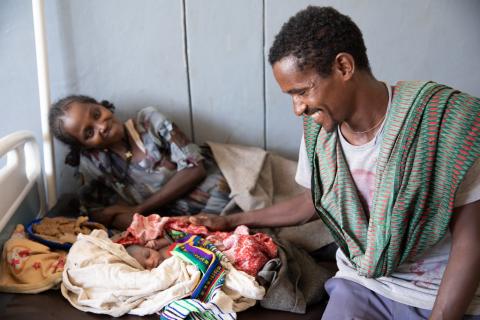 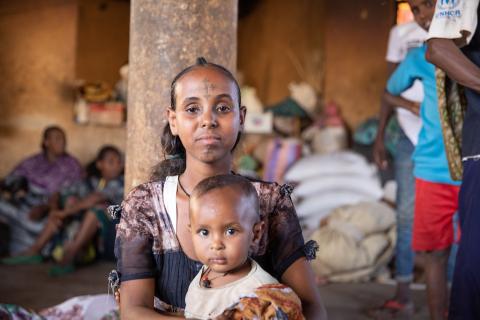 As humanitarian crisis unfolds in Tigray,

UNICEF steps up its lifesaving response