All children, no matter where they live or their circumstances, have the right to survive and to thrive. See how UNICEF’s nutrition programme helps keep millions of children alive and healthy.

An adequate well-balanced diet is the bedrock of child survival, health and development. Well-nourished children are more likely to be healthy, productive, and ready to learn. Undernutrition, by the same logic, is devastating. It blunts the intellect, saps productivity, and perpetuates poverty.

Ethiopia has seen a steady reduction in stunting from 58 per cent in 2000 to 38 per cent in 2016, in the percentage of underweight children from 41 per cent to 24 per cent during the same period, and in wasting from 12 per cent to 10 per cent. These trends indicate an improvement in chronic malnutrition over the past 15 years.  Yet 28 per cent of child deaths in Ethiopia are associated with under-nutrition. In addition, a high prevalence of various forms of malnutrition among vulnerable groups has serious implications for social development and economic growth.

Micronutrient deficiencies in iron, vitamin A, folic acid, iodine and zinc remain the most common.

The Government of Ethiopia recognizes that addressing malnutrition is essential to achieving sustainable development. As a result, bold actions were taken in health and other nutrition-specific sectors to put in place policies, programmes and large-scale interventions to significantly reduce all forms of malnutrition among the most vulnerable groups, young children and pregnant and lactating women. Nevertheless, under-nutrition among children and women remains an urgent concern, requiring multi-sectoral efforts.
UNICEF’s nutrition programme focuses on these areas:

Natural events such as droughts and floods usually trigger food insecurity in Ethiopia, where over 85 per cent of the population is dependent on rain-fed subsistence agriculture and livestock husbandry, resulting in an increased number of children with acute malnutrition. To mitigate and manage nutrition shocks, UNICEF works with the government’s disaster risk management and food security sector, regional authorities and other partners to deliver coordinated preparedness and response, and to refine emergency preparedness and response plans. 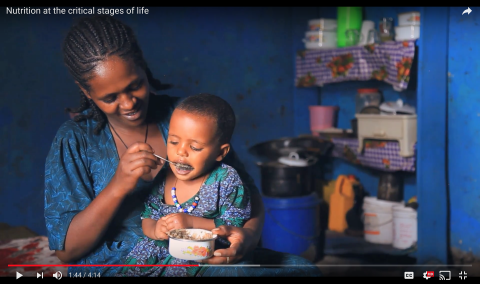 Nutrition at the critical stages of life

When we visit Netsanet in her house, it is a typical morning for her...