HARARE, 18 October 2019 – UNICEF Zimbabwe has today launched the State of the Worlds Children Report, noting that an alarmingly high number of children are suffering the consequences of poor diets and a food system that is failing them.

The State of the World’s Children 2019: Children, food and nutrition finds that globally, at least 1 in 3 children under five – or 200 million – is either undernourished or overweight. Almost 2 in 3 children between six months and two years of age are not fed food that supports their rapidly growing bodies and brains. This puts them at risk of poor brain development, weak learning, low immunity, increased infections and, in many cases, death.

The report provides the most comprehensive assessment yet of 21st century child malnutrition in all its forms. It describes a triple burden of malnutrition: Undernutrition, hidden hunger caused by a lack of essential nutrients, and overweight among children under the age of five. The greatest burden of malnutrition in all its forms is shouldered by children and adolescents from the poorest and most marginalized communities, noting that in Zimbabwe

The report warns that poor eating and feeding practices start from the earliest days of a child’s life. Though breastfeeding can save lives, only 61 per cent of children under six months of age are exclusively breastfed in Zimbabwe and an increasing number of children are fed infant formula largely due to inappropriate marketing and weak policies and programme to protect, promote and support breastfeeding.

As children begin transitioning to soft or solid foods, too many are introduced to the wrong kind of diet. Most Zimbabwean families struggle to give their child the right mix of food at the appropriate time due soaring food prices and other factors such as lack of information, skills on how to prepare appropriate foods. Only a small fraction young child between six months and two years of age are not fed any fruits or vegetables. And do not eat any eggs, dairy, fish or meat.

The face of malnutrition is also changing in Zimbabwe, alike what is observed worldwide, with overweight and obesity been on the rise even amongst poor families who tend to select low-quality food that costs less. About 13 percent of adolescent’s girls 15-19 years are overweight or obese and the rates of obesity nearly 1.6 times higher amongst higher in urban girls. As children grow older, their exposure to unhealthy food becomes alarming, driven largely by inappropriate marketing and advertising, the abundance of ultra-processed foods in cities but also in remote areas, and increasing access to fast food and highly sweetened beverages.

“Far too many children, young people and pregnant women are eating too much unhealthily foods and too little healthy foods. What is apparent is that the challenge of this century is no longer just ensuring children survive but that children also thrive during adolescence and transform into functional adults,” said UNICEF Representative, Laylee Moshiri.

The report also notes that globally climate-related disasters cause severe food crises. Drought, for example, is responsible for 80 per cent of damage and losses in agriculture, dramatically altering what food is available to children and families, as well as the quality and price of that food.

UNICEF Climate advocate speech on climate change and SDGs
Climate Change is now our reality. It is causing these extreme weather events to be more frequent and more severe.
Read the story 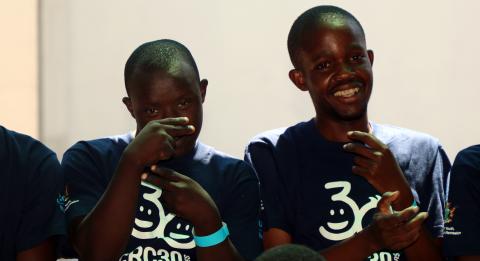 Engaging Children with Disabilities in Policy
“Hearing the direct voice of children, including children with disabilities, is of paramount importance."
Read the story 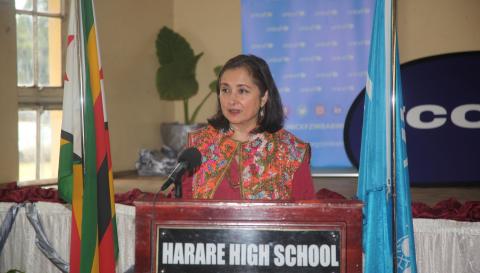