Reunited with family in DR Congo after three years in Zambia

Protecting the rights of migrant and displaced children

After years apart, it was hard to hide the joy as four boys originally from the Democratic Republic of Congo (DRC) were reunited with their families.

Around three years ago, a farmer in Zambia’s central Mpongwe District looking for child cattle herders approached families that lived on the border with the DRC. The promise he made to those parents was a cow in return for 2-3 years’ work from the boys. With many families struggling to make ends meet, several parents agreed. A total of six children were involved – the youngest was nine years old and the eldest 15.

“After working for close to three years, the boys came to the attention of Lufwanyama District police who contacted immigration services in the nearby city of Ndola. Immigration said they had six foreign children and four suspected perpetrators of child trafficking.”

“We immediately informed Social Welfare who are the secretariat team for the Best Interest Determination panel (BID). The Chairperson of the Best Interest Determination panel, Mr Mwambo, called for an emergency meeting to see how the children could be assisted.” BID panels consist of government actors (Immigration, Police, Department of Social Welfare, Ministry of Health and others) who come together to jointly make decisions in the best interest of each child migrant.

“As a panel we sat and thought about the best way to assist the children. Firstly, the children were tested for COVID-19 by Mr Mutale who is part of the panel and the district health principal clinical officer. After this, basic medical examinations where carried out.”

A letter was sent to the Cicetekelo Youth Project following a recommendation from the BID panel. Cicetekelo agreed to house the boys, allowing them to leave the correctional facility, where they were temporarily placed.

A letter was sent to the Cicetekelo Youth Project following a recommendation from the BID panel. Cicetekelo agreed to house the boys, allowing them to leave the correctional facility, where they were temporarily placed.

Mrs Chewe Chanda, the District Education Standards Officer and a member of the panel, assessed the children’s literacy and discovered that they had never been to school.

While at Cicetekelo, the boys received counselling services and were enrolled in the basic literacy classes. Unfortunately, two of the older boys absconded and have not been traced. The remaining four progressed in their learning and were able to write their names for the first time.

Of the four remaining boys, the 15-year-old has shown a particular interest in the garden at the centre, and waters the flowers each morning. As the legal trial continued, the BID panel continued to visit the boys, and officials worked to trace the boys’ parents.

From the counselling sessions, the boys were helped to overcome their fears and two appeared in court as child witnesses accompanied by social welfare officials. They narrated the ill treatment and hardships they had experienced while living as cattle headers. At the end of the trial, one of the adults arrested was discharged, two were fined, and one conviction was made which is now awaiting sentencing.

The mothers of the boys were traced successfully and counselled on child protection before they met their children. It was a joyful day when the mothers saw their boys after three years and the boys have since been reintegrated into their community of origin in the DRC. 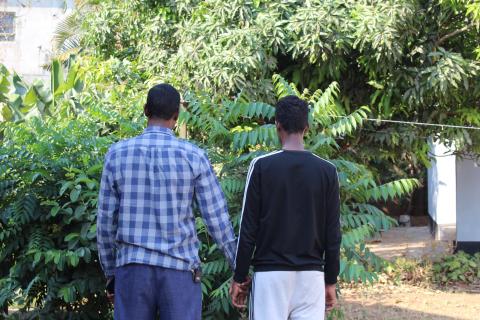 Best Interest Determination works for Children on the Move