Ms. Marie-Pierre Poirier is UNICEF’s Regional Director for West and Central Africa. Based in Dakar, she provides leadership for 24 country offices across the region.

Her career with UNICEF spans more than 30 years across Asia, Africa, Europe and Latin America as an advocate for child rights, working on the development and management of rights-based country programmes of cooperation in collaboration with governments, civil society and the private sector.

Previously, Ms. Poirier was Regional Director for Central and Eastern Europe and Central Asia, from 2012 to 2016. She has extensive field experience as UNICEF’s Representative to Brazil, Mozambique, Namibia and Deputy Representative in Pakistan. From 1989, she led UNICEF’s Child Rights Section in Geneva at the time of the final negotiations on the Convention on the Rights of the Child. She started her career with UNICEF in New York as an expert on poverty and exclusion in urban areas.

Ms. Poirier holds a Master’s Degree from the National Institute of Oriental Languages and Civilizations at Sorbonne Nouvelle. She graduated in Economics from the University of Paris in 1981, after having studied a year in Harvard. 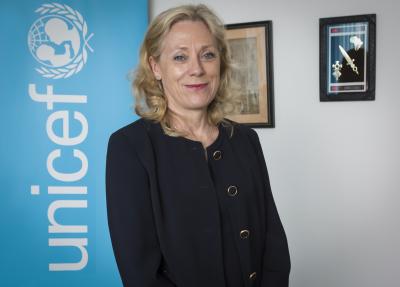 The Regional Director was with UNICEF Ghana to participate in celebrations of the 30th anniversary of the Convention on the Rights of the Child and meet with children and communities.

Ghana was the first country in the world to ratify the Convention in 1990. The country is celebrating progress on children’s rights, but also calling all stakeholders to work harder so that no child is left behind.