Ebola outbreak in the Democratic Republic of Congo

Outbreak in North Kivu and Ituri

In the two provinces affected by this latest outbreak – North Kivu and Ituri – insecurity and armed conflicts have made the response more difficult than in previous outbreaks.

Children who lose a parent due to Ebola or whose parents are infected by the disease are at risk of being stigmatized, isolated or abandoned, in addition to the experience of losing a loved one. They are particularly vulnerable, and UNICEF is concerned for their wellbeing.

Dieudonné, 13, lost 8 members of his family to Ebola: “They all died of Ebola. It was my entire family. It was my mum initially and then my sisters and aunts followed. [..] I can’t just kill myself, I must continue to live.” UNICEF works with communities to stop the spread of Ebola and protect children.

Kavira was cured of Ebola and is now immune to the disease. She gives her time to help provide care for children admitted in the Ebola treatment center in Beni, supporting their recovery and giving them the love that every child needs.

Jacques and his mother survived the world’s second largest Ebola outbreak in history. Now he’s going back to school. UNICEF has been there every step of the way.

What is the impact on children?

In this outbreak, children represent a high proportion among the confirmed cases of Ebola. About 30 per cent of confirmed cases are children, and 40 per cent of those cases were among children below 5 years old. But the impact of the disease on children is not limited to the children that have been or are infected by the disease. It impacts their families and communities when children lose their parents, care-givers and teachers. Also, the outbreak makes basic services such as health care and education much harder to access.

How about children who have lost their parents or caregivers?

What is being done to fight the outbreak?

National health authorities in DRC are leading the response to the Ebola outbreak, building on their experience with previous outbreaks. They are supported by many local and international partner organizations, such as UNICEF, the World Health Organization, and Medecins sans Frontieres, all working together to: provide care and treatment to patients; trace people that have been in contact with infected people; inform and work with communities on prevention measures; deliver water, sanitation and hygiene to prevent the spread of the disease; and provide psychosocial care to infected people and their families, etc.

What is UNICEF’s role?

UNICEF works with partners on three broad areas to support the overarching goal of ultimately defeating Ebola and getting to zero cases.

In addition, UNICEF works with 2,400 schools across the affected and at-risk areas to build a protective environment for children. This includes distributing health and water, sanitation and hygiene supplies, including handwashing units and laser thermometers. Some 31,500 teachers and principals, and 870,000 students have received sensitization or training on Ebola.

What is being done to better raise awareness of communities about Ebola and how to protect themselves?

The goal of community engagement is to help communities to understand, accept, and ultimately lead on doing what’s needed to end the outbreak. UNICEF works with partners embedded in communities to enable the knowledge, skills and resources required to defeat Ebola from the ground up. Community members themselves know best how to raise awareness, detect new cases, enable culturally appropriate and safe and dignified burials, and help decontaminate households and other transmission sites. We need to listen to their needs and provide them with the tools required, be it information or materials.

Is there a vaccine against Ebola?

Yes, a vaccine exists against this strain of Ebola. In the vaccination efforts, UNICEF’s role is to inform communities on the vaccine and ways to prevent against the disease. Vaccines are given for free and on a voluntary basis to health workers, and to persons who have been in contact with infected persons and to contacts of these persons. 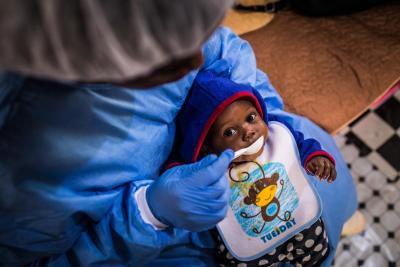 Ruth, a caregiver at the Ebola Treatment Centre of Butembo, plays with a baby inside a nursery for babies and young children affected by the virus in North Kivu. Ruth, who survived Ebola and is immune to the virus, returned to the centre to help children whose mothers are suffering from Ebola by cradling, feeding and holding them. 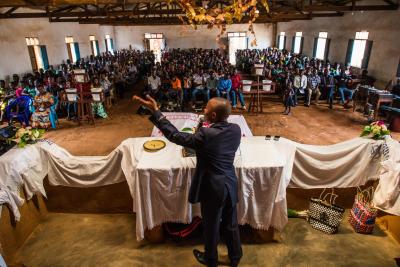 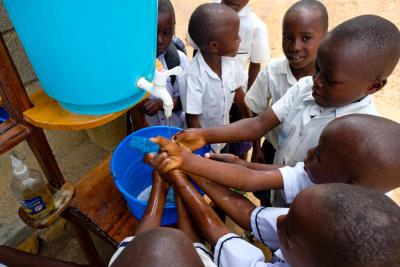 After learning that handwashing is among the best ways to protect yourself against the deadly Ebola virus, a group of school children wash their hands at a UNICEF hand-washing station at their school.

Stay Up to date

Download the latest situation reports on the Ebola outbreak in DR Congo.

Support UNICEF's efforts in the DRC