ImkonLab - the way to make your dreams come true

Fatima Saparova (24 years old) lives with her mother and sister in Nukus, the capital of Karakalpakstan. She was born and grew up in the region most affected by the Aral Sea tragedy.

Fatima Saparova (24 years old) lives with her mother and sister in Nukus, the capital of Karakalpakstan. She was born and grew up in the region most affected by the Aral Sea tragedy, in the region where environmental problems are not just the talks about the future, but the present, in which the local population lives every day. Fatima often thought that young people should make at least a small contribution to improving the ecological situation and preserving the nature of her region.

This opportunity was provided to Fatima and her peers by the ImkonLab programme, implemented by the Youth Union of Uzbekistan and UNICEF. ImkonLab is a social innovation and social entrepreneurship programme targeted at skills development.

Fatima's team took part in the pilot round of the program for Karakalpak youth, which was conducted during the lockdown in August 2020. Along with nine other teams, they took part in a social innovation 7-day BootCamp and received a grant of $ 1000 and mentoring support for incubation of their ideas.

“Facing the pandemic, I wondered how the trainings would be conducted, what they would teach us and what the audience would be like,” says Fatima. “I expected to learn more about startups, innovation, and solutions of social problems. All my expectations were met. The only thing I wish for is that we could meet mentors, coaches and other participants in-person. I really wanted to sit with them at the same table. For me, the training days were some of the best days in my life! "

When Fatima's team started the project, they themselves had a vague understanding of what an eco-bag is. There were many questions: what fabric to sew from, what equipment should be bought, whether eco-bags will be demanded and how to make them popular. Nobody in the team knew this.

“We wanted to make a small contribution to improving the ecology of our region by this project. Profit was not our priority” emphasizes Fatima. “We heard a lot of negative feedback when we started this startup project and we still hear it. It is difficult to implement such a project in Karakalpakstan because people still do not understand it. However, we did not stop and continued to move forward and work."

Fatima and her associates are confident that thanks to this startup project, they can teach the residents of Karakalpakstan to follow the eco-culture. They not only sewed bags, but also carried out awareness-raising campaigns. Now they are proud that the number of orders for their products is growing day by day. The first wholesale orders have already been received.

Young people led by Fatima intend to expand their project. They apply for other grants and for participation in competitions, they plan to purchase additional equipment. Their goal is to export bags with Karakalpak ornament.

At the moment, Fatima is a 4-level Economics student at the Berdakhai Karakalpak State University and continues to produce the eco-bags. Her products can be found on the pages in Telegram @eco_sumok and Instagram: @eco_bags.nks

Fatima gratefully speaks of the programme that helped her realize her dreams:

“The ImkonLab programme really opened up new opportunities for us.  I want to thank UNICEF, the Youth Union and my mentors for this. Thanks to participation in the programme, my life has changed considerably. After winning in this programme, I have participated in various international innovation conferences, met with high-level people in the field of ecology and entrepreneurship. ImkonLab is the door to real opportunities! " 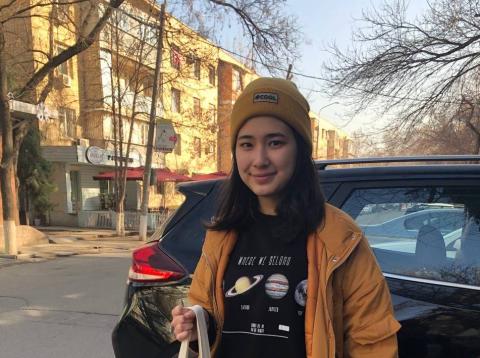 Towards my dream: Dilnoza's story

We present another UniSat participant, who is preparing to assemble and launch a nanosatellite in Almaty on March 27, 2022.

From childhood dreams to scientific developments

“As a child, I often saw white stars in the night sky. They flew like airplanes. I always wanted to find out what it was,” says Ikboloy Umarova.