А migrant’s son and his pursuit of a dream

This spring, it rained a lot in Behbud’s village.  As he walks down an empty, muddy road, replaying a conversation with his mother, his boots get soaked with water. “She will come. Soon,” he murmurs.

Surrounded by sand dunes, the village is located about an hour from Bukhara city. Last year, when Behbud went to meet his mother at the airport, waiting for her seemed the longest hour in his life. Longer even than the 11 months that he hadn’t seen his mother. This time, he will not look at his watch or count days until his mother arrives. “When I do, time goes very slow,’ he says.

When she visits, Behbud’s mother, Feruza, checks his school diary and scolds him for any rarely occuring bad grades. But Behbud doesn’t mind – he waits too long to see his mother to spend the time being upset. Feruza works in Russia full time and only visits home once a year during her annual vacation.

The boy was just seven when his mother first left for Russia in search of better opportunities. For the past five years, he has been living with his grandparents. It took him a while to adjust to her absence. “Now I’ve got used to it,” he says.

Behbud is a very quiet boy, who doesn’t like to speak a lot, but his eyes tell a story.  It’s the story of a child who has learned not to look for his mother for comfort when he is hurt or unhappy. Instead, he has to let his feelings out in secret. “I don’t want my grandma or grandpa to see my tears,” he says. He does cry sometimes, when he misses his mom. Sometimes his mother  cries too. He can tell by the tremble in her voice. But he never tells her how much he misses her. “I understand, she is doing it for me,” he adds softly.

“The physical presence of parents is the major factor in maintaining attachment relationships with children,” says Maziyar Taleshi, child protection expert working with UNICEF in Uzbekistan. “Their prolonged absence may take an emotional toll on the children left behind, impacting on their phycological wellbeing.”

Several times Behbud had asked his mom to take him with her. “It’s impossible, you have to go to school,” she said. “On top of that, you need to take care of your grandparents, while I am away.”

His grandparents do take a good care of Behbud. His grandmother cooks his favorite dishes, while his grandfather helps him with homework and shares farming secrets in their backyard plot. After classes, they check the potatoes, feed the rabbits and water the plants.

Since his mother has been away, his grandparents have never berated him for anything. “While my daughter is away, Behbud is the light of our eyes,” says his grandfather, who taught math at a local school for 42 years before retiring. As a former teacher, he knows the value of quality education and regularly checks Behbud’s academic performance.

He doesn’t blame his daughter for working abroad.  When Behbud was born, Feruza returned to her parental home. As Behbud grew up, the grandparents’ one-bedroom house became too small for a mother with a child. With a failed marriage and the growing needs of her son, she didn’t have many options to choose from, he says.

With a population of over 33 million people, Uzbekistan is a major migrant-exporting country in the region. Every year, thousands of people leave their families and children in search of better paying work abroad.

Although labor migration has been a powerful driver of economic growth in the country, little is known about its effects on the well-being of children left behind by migrating parents.

To understand the impacts of migration on children, UNICEF jointly with the Women’s Committee of Uzbekistan, launched a project in July 2018. Funded by the European Union, the initiative includes conducting a study in Bukhara, Fergana, Surkhandarya and Khorezm regions to better understand the situation for children left behind due to labour migration. Based on the findings of the study, recommendations will be developed to better ensure these children’s rights.

With the money Feruza has been sending, her father has built her dream home next to theirs. The fresh smell of paint still lingers inside the newly built two-bedroom house. A shiny clean car is parked in the garage. “This is mom’s car,” Bekhbud explains before heading up to his room. With the blue curtains shut, the white walls of the room look gray. A cupboard and a drawer with a few toys on top fill one side of the wall. The boy smiles. His mother decorated this room during her previous stay.

At school, Behbud likes math and history classes. He also attends a sports club three times a week. His grandfather has enrolled him in Muay Thai, a combat sport that also uses various wrestling techniques. He dreams of pursuing a career in the military. But he has a dream even more precious than wearing a military uniform, one he shares secretly. “I want my mom to return and never leave me again.” 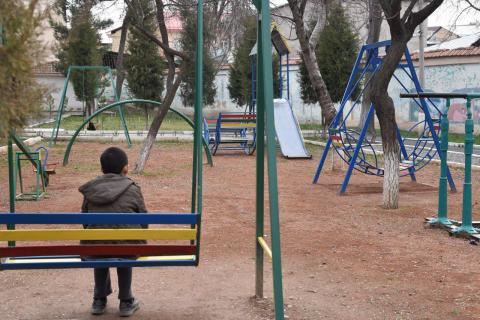 It has been a week that he has not seen his mother, since he was placed at children’s transit center 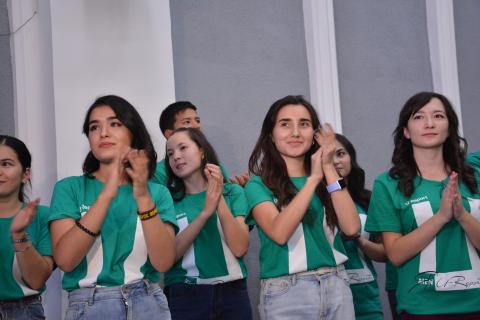 “I’ve swapped my complaining for something more positive”:

U-reporters talk about their motivation for getting involved.