For five years, villages in eastern Ukraine not only endured a devastating armed conflict. They also struggled with a shortage of drinking water.

Every day, hundreds of families from Nyzhnia Olkhova, Verkhnia Olkhova, Malynove, Plotyna, and Pshenychne in Luhansk were forced to decide whether to risk fetching drinking water from neighbouring villages or use dirty water from their wells.

But now a new project implemented by UNICEF and Arche Nova to install a water tower, pumps, pipes and reservoirs is transforming lives by supplying clean water at last.

Without water or hope

Illia, 13, from the small village of Nyzhnia Olkhova near the ‘contact line’, had to walk to a well three times a day to enable his mother to cook and do laundry.

“I needed to go down two floors to get to the well,” says the schoolboy. “You go down, you fill them, you bring them back. I got used to it.”

The failing water tower in his village could not pump water up to their apartment. Water in the wells was often unsanitary, but the family had little choice.

“There was no water for days, so we had to rely on wells,” says Iryna, Illia’s mother.

Illia and Iryna, 37, filled their buckets with water using a hose and then poured it into an old sink in their yard, where it sat until the mud settled.

“The water is often yellow,” says Illia. “In some wells, it is sour.” 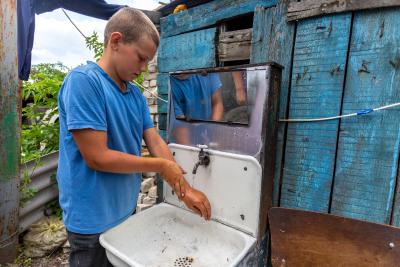 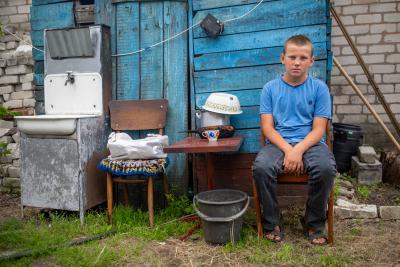 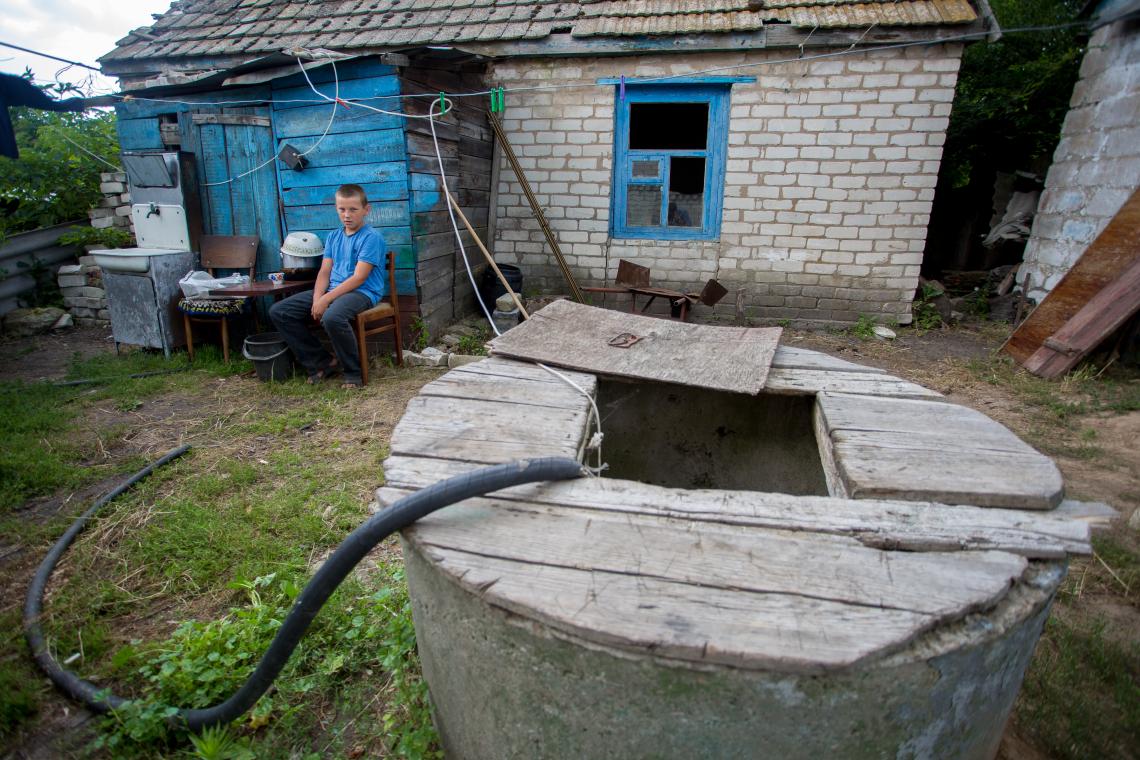 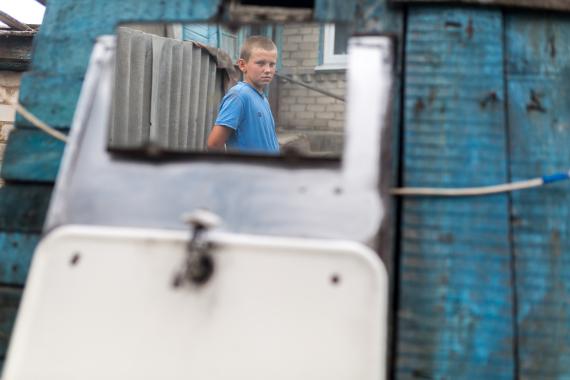 Yurii Penkov, head of the local civil-military administration, says that while there have always been problems with water in his district, the conflict made them worse. Pipes were destroyed by shelling and there was no money for a new water tower.

“People went three or four kilometres to get water,” he says. “Some by car, some with a wheelbarrow. I couldn’t bear to watch that. We reached a point where the water had become so undrinkable that even animals didn’t touch it. It was green, salty and worm-infested.”

Penkov searched for a solution for several years. He says he “knocked on every door”.

“Until the last moment, people did not believe that it was possible,” he adds. “They’d lost all hope.”

But improvements to the water supply are being made at last, thanks to the Government of Germany, UNICEF and Arche Nova.

“Thanks to our donors, people started believing again,” says Penkov. “And they even started going back to their abandoned houses.”

The project was a major challenge. Many villages had been partially mined during the conflict and experts had to clear a patch of land to install a water tower.

“We were implementing the project 10 kilometres from the contact line,” says Nicola Meyer, head of Mission for Arche Nova in Ukraine. “There used to be an airport in this area and that is still heavily mined. In order for the lorry to deliver the water tower, we needed to demine this area, just so the truck would have somewhere to maneuver. Things that seem simple often become acute and problematic in this territory.”

Restoring hope for the future 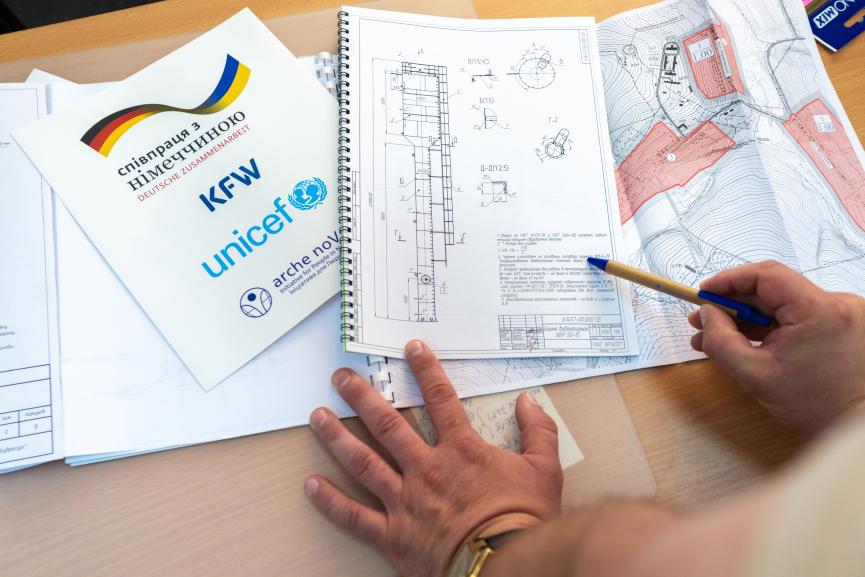 The project to supply drinking water to the Stanytsia Luhanska district was the fourth joint project between Arche Nova and UNICEF.

It was developed by the local administration of the five villages, and donors helped the people to buy and install a water tower, pipes and a pump.

“This project is governed by representatives of the local communities,” says Meyer. “We work with them and it is really great that everything is done with the participation of local citizens.”

Illia’s mother Iryna believes the new water tower will solve her village’s supply problem. Soon, they will no longer need to carry heavy buckets from the well.

“It will be easier now and the water will come more often,” she says, happily. “And the water itself will be better, because it will run through new pipes and not the old rusty ones.”

According to UNICEF, the water supply in conflict-affected areas of Ukraine has temporarily halted or ceased entirely for 3.2 million people since the beginning of 2019. On average, the issue lasted for 29 days. There were 58 recorded cases of damage to water supply and sewage facilities. Since the beginning of the conflict, nine water supply system employees have been killed and 26 injured, including three this year. All died or were injured while trying to ensure continuous water supply for children and families living in the conflict-affected area. 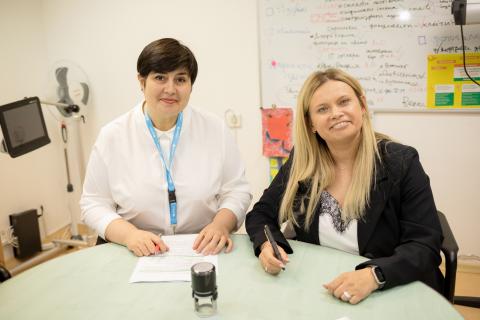 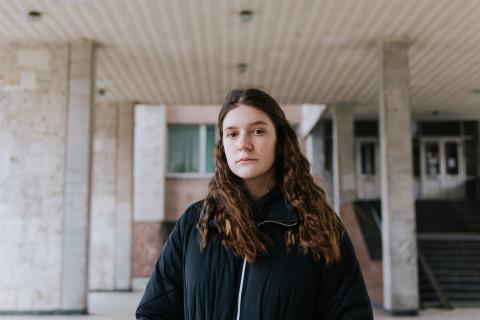 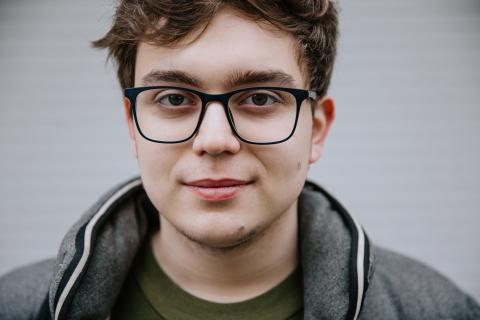 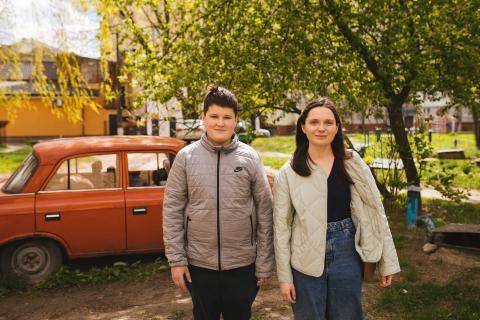