Lives on the line: Cost of conflict still high for families in eastern Ukraine

After a grenade explosion left her daughter scarred for life, one mother tells of her struggle to overcome trauma in eastern Ukraine

Seven-year-old Polina loves to sing and dreams of becoming an artist. She has no recollection of the shell that exploded in the courtyard of her house six years ago and killed her grandmother.

The white scars on her face and legs are the only reminder of that fateful day in summer 2014, a few months after the outbreak of conflict in eastern Ukraine.

“She had a cardiac arrest,” recalls her mother, Svitlana. "She learned to walk again. She suffered deep wounds on both legs. But she remained alive – this is the most important.”

Along with her grandmother, Polina's uncle and neighbor were killed in the explosion. She and her parents received serious shrapnel wounds.

Psychologists have decided that it is better for Polina to believe her version of events – that she simply fell off her bike. But Svitlana and her husband can never forget the true horror.

The human cost of conflict

After more than six years of armed conflict in eastern Ukraine, explosive objects have become a major cause of conflict-related death and injury to children. According to the United Nations Children’s Fund (UNICEF), from April 2014 to August 2020, 39 children died and 137 were injured due to mines and explosives. This is around a third of all recorded deaths and injuries among children during the conflict. Many children have been left with disabilities for life.

Svitlana and her family live in eastern Ukraine, not far from the ‘contact line’,  where fighting is still severe. She remembers seeing Polina’s uncle, a teenager, return to the house with an anti-tank grenade in his hands.

“I saw a shell falling,” she says. “Then everything I saw was through a yellow veil. And when I opened my eyes, I immediately thought about Polina.”

When she woke up in the hospital, the first thing she did was to ask about her daughter.

“The doctor must have confused something and said that the child had died. At this moment I wanted my life to stop.”

After the explosion, Polina spent two weeks in intensive care with shrapnel wounds to her head and legs. Her parents were unable to walk for six months due to their injuries.

At the time, Svitlana was three months pregnant. Doctors suggested that she have an abortion so that the skin could be transplanted onto her wounded leg.

“I refused an abortion and a transplantation,” she recalls. "And I endured all the pain without drugs for the sake of the child. Yes, I have scars for the rest of my life, but I gave birth to Polina’s sister.”

She now prefers to wear trousers in order to hide the scars on her legs. But Svitlana has bigger priorities.

“I don’t think about my scars. Polina has a scar on her face that gets in the way and she has such scars on her legs that she won't wear a skirt. And when she has to, she always asks me to give her tights to wear.”

According to her parents, Polina is a creative and caring child.

“I love helping my mother around the house," says the young girl. "I love drawing. And I love my little brother. We play school and catch with him.”

A lifetime of scars

Svitlana and her husband try to create a relaxing environment for their three children, but the conflict has seriously worsened their financial situation and made it difficult to access medical services.

As well as the physical scars, Polina had also had to cope with dental problems as a result of the explosion, requiring expensive treatment.

“The roots of her teeth began to rot," says Svitlana. “It was a lot of money for us. And to seek treatment, we had to take a bus to another city. I will do everything for my children, but with this treatment, we could not cope without help.”

Medical, psychological and financial assistance has been provided to the family by UNICEF together with its partner, Polish Humanitarian Action. This is the UNICEF’s first Mine Victim Assistance Programme in Ukraine to support survivors of mines and explosive remnants of war that is funded by the Governments of Germany and Italy.

UNICEF and its partners are working to help people affected by mines and explosives in the Government-controlled territories of the Luhansk and Donetsk regions, where psychosocial support can be expensive and difficult to access. Its personalized support has already been provided to 46 mine victims, 34 of whom are children.

“People affected by mines need regular medical examination with further treatment, surgical interventions, as well as financial and legal assistance,” says Kateryna Kryklyva, Project Coordinator of Polish Humanitarian Action in Ukraine. “But psychological assistance is even more in demand, since many of them have not overcome their trauma yet and are still feeling stressed because of what happened.”

For Svitlana, it has been especially difficult to come to terms with the death of her mother and the fact that life for her family will never be the same.

“At first, I blamed the boys who brought the shell,” she says, sadly. “But then I realized that there was no one to blame but the war. If not for the war, this would not have happened. Therefore, now I do not let my children go anywhere alone. I understand that this threat is still all around us.”

Donate to support Mine Victim Assistance Programme in Ukraine 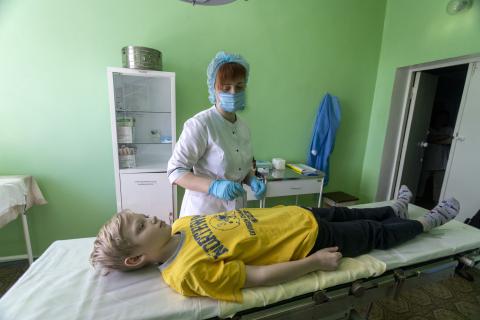 Providing support for children in case of emergency 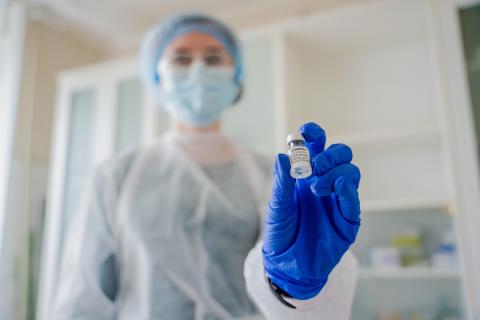 UNICEF extends the partnership with the Global Fund to Fight AIDS, Tuberculosis and Malaria in Ukraine 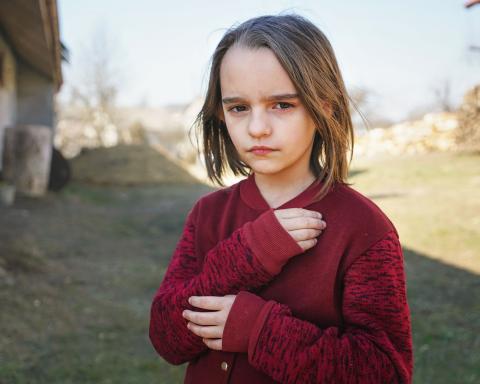 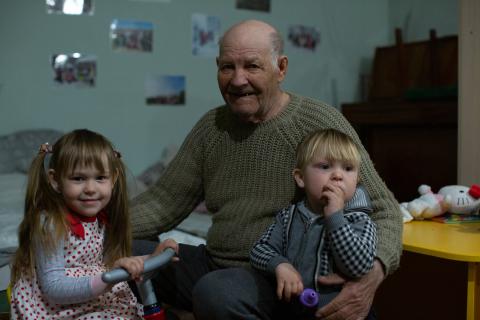 In Ukraine, three generations flee horrors of war at home

Valentyn, an 84-year-old grandfather, drove for several days without rest in a desperate attempt to save his family from the violence in Ukraine.