For the first time in Ukraine’s history, children have opened a parliamentary session, in an effort to remind leaders about the importance of their rights.

In a series of speeches delivered to the Verkhovna Rada on November 15, young activists also raised concerns about the challenges they face. Their historic words helped to mark the 30th Anniversary of the UN Convention on the Rights of the Child.

Three hundred and fifteen members of parliament voted in favor of including children's speeches into the daily agenda.

“Children are our future,” said Dmytro Razumkov, Speaker of the Verkhovna Rada. “We are building a better country for them today. Therefore, it is appropriate for all of us to hear their voices, their opinions and aspirations. We have invited young activists to share with us their vision of the future and, moreover, the present.” 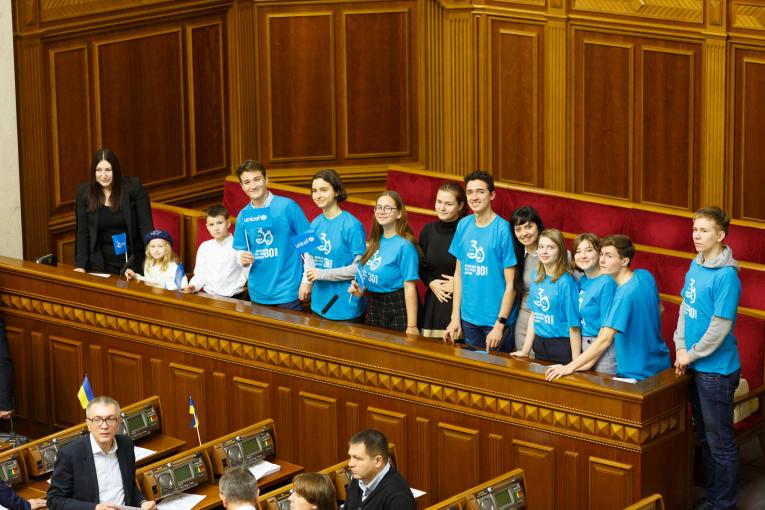 As part of UNICEF’s efforts to make young voices heard this November, children around the world took on leadership roles in media, politics and business to express their views and speak up for millions. It provided an opportunity to get involved in the decision-making process and for decision-makers to hear them.

“Children in Ukraine share many concerns and challenges with their peers from all over the world,” says Laura Bill, UNICEF Deputy Representative in Ukraine. “Because of poverty and protracted conflict, more children are at heightened risk of neglect, domestic violence and institutionalization. There are also problems with access to clean water, bullying and other issues. Only with innovation, political will and increased resources will we translate the vision of the Convention on the Rights of the Child into a reality for all children everywhere. UNICEF is ready to work together with the Parliament and Government of Ukraine to accelerate the progress in fulfilling the rights of children.”

Lidiya Davyda, a 15-year-old student from from Lviv, was one of invited children who shared their thoughts and concerns with the Verkhovna Rada. She stressed the importance of involving children and young people in decision-making processes.

“We suggest creating platforms where children can express their opinions and actively promote children's self-governance. Thus, enabling the right of a child to be heard. By giving children an opportunity to participate in the life of the country, we promote the growth of active and caring citizens. So we are increasing our chances for better future.” 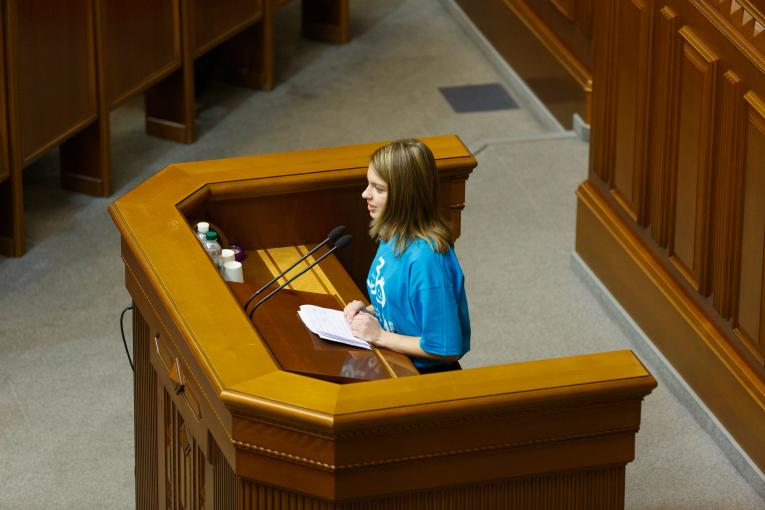 The young activists, who specialize in environment issues, health and education, had the chance to speak to MPs in person.

Volodymyr Charushyn from Kharkiv, who created the Sign Language Promotion Project, spoke on behalf of of children living with disabilities. The 17-year-old will represent Ukraine at the UN General Assembly in New York on November 20.

“My friends and I dream of breaking the wall of misunderstanding between society and people who cannot hear or see,” he told a press briefing. “We need to be change-makers. We are a society. It's me, you, each of us. I speak sign language, but you can hear me by heart. And together we will build a country that respects and listens to the rights of children.”

This week, children’s takeovers will be held across Ukraine. More than 25 cities and communities plan to join the action on November 20. On this day, local public officials will offer their job to the children and will listen to their advice on key issues.