Early childhood is key for well-being and success throughout life.

During the first years of life, the brain develops at an astounding rate. The years from conception through birth to eight years of age are critical to the complete and healthy cognitive, emotional and physical growth of children. Decades of rigorous research show that children’s earliest experiences play a critical role in brain development.

Early childhood is key for well-being and success throughout life. Socio-emotional and cognitive skills developed early on in life have a large impact on people's potential, and inadequate learning environments can prevent full child development.

Turkmenistan has acknowledged the importance of promoting early childhood development, with commendable advancements made in ECD policy formulation. The national laws and programmes provided significant support to ECD, using the available entry points in the health and education sectors.

However, the potential of the most immediate nurturing care circle – formed around the child by their parents and extended family – has not been fully activated yet in Turkmenistan, despite the acknowledgement of its criticality for young child’s development in the national ECD discourse. The child’s cognitive and socio-emotional development has been less the focus of caregivers’ attention – be it mothers/parents, extended family members, medical or school personnel. As revealed by MICS data in 2016, among children aged 3-4 only 19 per cent were able to demonstrate age-appropriate literacy and numeracy skills (in Dashoguz velayat – 6 per cent) – against the SDG 2030 target of 91 per cent. While 87 per cent of children could identify figures, play and communicate with other children, only 62 per cent knew how to hold a pencil and draw; only half were able to concentrate when doing a task, and only one out of four children could read four simple words – according to a UNICEF study of the same year. Important and mutually complementing roles of both parents have not been recognised equally, as most Turkmens (89 per cent of those polled in 2016) believe that children should be educated by their mothers; only 41 per cent considered that father also plays an important role in child education. Fathers’ space in the world of young children is even smaller, as only 15 per cent of them interact (play, read, sing and spend time together) with their children on a regular basis.

Realizing the importance of ECD, the Government of Turkmenistan has adopted the National Early Childhood Development and Early Intervention Strategy for 2020-2025.

The Strategy aims to reinforce the national policy on early childhood with a focus on cross-sectoral coordination and integration of ECD services and vulnerable children and families while giving special attention to the quality of early childhood care and education.

In Turkmenistan, the Ministry of Health and Medical Industry has primary responsibility for children aged 0 to 3 years old, while the Ministry of Education is responsible for 3 to 7-years-old. ECD is a priority of the health sector due to its involvement in activities related to infancy and early childhood. The Ministry of Social Protection has specific responsibilities for the social welfare of the most vulnerable groups of children as well.

Turkmenistan reviewed and amended its legislation and changed its practices in the field of comprehensive early identification, care and development by setting up early childhood development centres. Guided by the social model of disability and based on early identification and intervention, two pilot ECD Centres, based on the general kindergarten infrastructure, were introduced with UNICEF support.1 These services provided in the centres are delivered by a team of professionals including a developmental paediatrician, pedagogue, early communication specialist, psychologists, physical and occupational therapists. Based in a regular kindergarten, such services aim to empower the children with disabilities and their families and support their further inclusion in mainstream education and society. This initiative will contribute to the on-going process of development of a cross-sectoral national registry of persons with disabilities.

More systemic efforts are needed to introduce a national system of identification, rehabilitation and support of young children. Assessment and service standards would have to be developed, a range of services to be provided identified, staff qualifications determined, and division of responsibilities among national and local authorities defined for successful implementation of the ECD system.3  ECD services to young children who have or are at risk for developmental delays can positively impact outcomes across developmental domains, including health, language and communication cognitive development and social/emotional development.

Families benefit from early intervention by being able to better meet their children’s special needs from an early age and throughout their lives.

Read more about our work in early childhood development 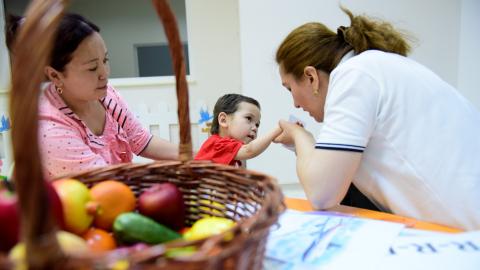 The value of holistic care and early intervention

When she first arrived at the Centre, she couldn’t hold her head up, sit, stand or focus on anything. Only her mother could understand her. 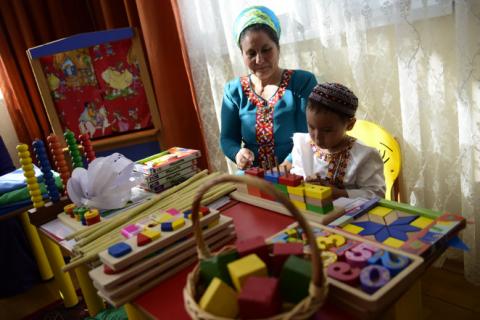 Parental centres in Turkmenistan help children get prepared for school 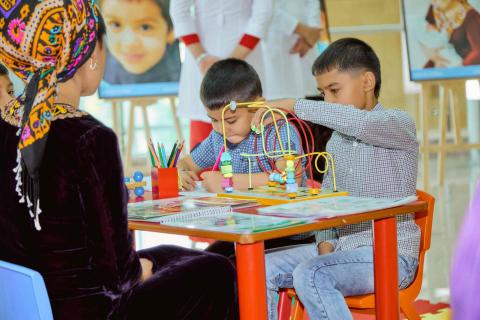 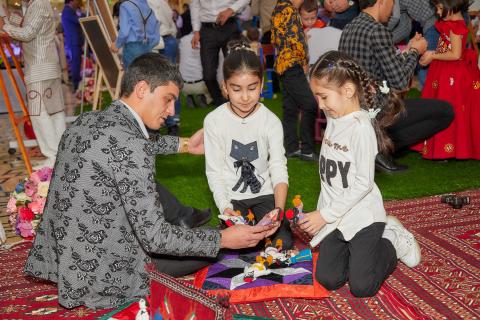