Founded in the city of Mardin in Southeast Turkey, this circus focuses specifically on training adolescents as a means of fighting exclusion and marginalization in a region struggling with poverty, terrorism and a massive influx of Syrian refugees.

Mardin, Turkey -- On their first day together, the children won’t even look at each other. They huddle and talk in small groups, Turks on one side, Syrians on the other. Unsure, hesitant, hardly moving. The room intimidates in its own way with its stone pavement, tall vaulted limestone walls and huge windows, an unlikely home and an unlikely group for Turkey’s first circus.

"On the first day there is tension between the groups, even with the families,” explains Yusuf Kurt, 35, the founder and general coordinator of the Mesopotamia Circus and Street Arts Project. “ Slowly, slowly friendships are created."

Founded in the city of Mardin in Southeast Turkey, this circus focuses specifically on training adolescents as a means of fighting exclusion and marginalization in a region struggling with poverty, terrorism and a massive influx of Syrian refugees. There are about 3 million registered Syrian refugees in Turkey. Of Mardin’s 796,000 inhabitants, 94,600 are Syrian refugees.

The circus trains children from 7 to 18 as jugglers, stilt walkers, acrobats, trapeze artists and Diabolo players. Their work area is in Mardin’s centuries-old ancient citadel, in a room meant to be a safe area where the long hours of team practice and performances double as therapy and breed friendships across ethnic groups.

"When I was a child there was no option to be part of a circus,” explained Şaban Akkuş, 22, a juggling instructor who joined the group as a 17-year-old trainee. “Now I am part of a team. I am supporting Turkish and Syrian kids from my province.”

In this world many milestones are unspoken. For Şaban, the magical moment is when he can tangibly see two cultures connecting. “The break-through is when the kids start juggling the balls back and forth. One is trusting the other one to catch it. Their eyes are talking.”

The circus was founded in 2012 with the assistance of the Southeastern Anatolia Project (known in Turkey as the GAP Administration) under Turkey’s Ministry of Development. In 2016 the GAP Administration partnered with UNICEF’s ‘Child Friendly Cities’ initiative and the circus went mobile, training adolescents in multiple districts including the cities of Şanliurfa and Batman. The joint program has so far reached an audience of over 22,000 and trained 800 children. In December 2016, a group of performers traveled to the capital Ankara to perform in a packed theatre for UNICEF’s 70th anniversary celebration.

It is pouring outside and the room is hot and steamy. In the chaos of noise there is friendly jostling, laughter, heads bent together, arms intertwined.  For the 23 kids, 7 of whom are Syrian, this is a temporary refuge. For four hours twice a week, they are in a different world.

Yusuf moves between groups keeping an eye on a Syrian boy and girl playing Diabolo together. Hene, 13, is from Aleppo and came to Turkey a year and a half ago. As she throws her Diabolo high above her head, her arms arched up as if flying, she grins with contagious satisfaction. One of 6 children, Hene has a first grade education. She lives in Mardin’s poorest and toughest neighborhood. There are no playgrounds, no parks.  One school told her there was no room for her. At another one, students threw stones so she left.

“I love this place,” she says smiling shyly. “I feel safe here. I have Turkish friends here.” But the mention of Syria makes her frown and whisper. “Yes, I remember Syria. I remember that it is destroyed.”

Suvar, 12, from the Syrian town of Hasakah, has been in Turkey already for 6 years. His parents are separated. He lives with his mother who earns a meager living collecting garbage recyclables from trash bins. Suvar works in the city’s industrial area making chairs. When he first joined, Yusuf would find him hiding behind the curtains. Now as Hene’s self-appointed body-guard, he translates for her and together they giggle and clown with the other performers.

The circus employs 13 people, has 17 volunteers (half Turkish and half foreigners) and provides a bus service for children like Hene and Suvar who live far away and would otherwise be unable to attend training sessions. But despite the buoyant mood and the constant laughter, Yusuf has gnawing worries about the children’s future especially for Hene and Suvar.

“We can create this environment with just a few weeks of training,” Yusuf said. “We give them confidence and friendships which I hope will guide them into adulthood.”

UNICEF partners with Turkey’s GAP Administration through the Circus and Streets Arts Workshops and Festivals, a program funded by the United States Bureau of Population, Refugees, and Migration (BPRM). Children’s activities take place in Mardin, Sanliurfa, Kilis and Gaziantep and include circus training, art workshops and training in dance, visual arts and music. 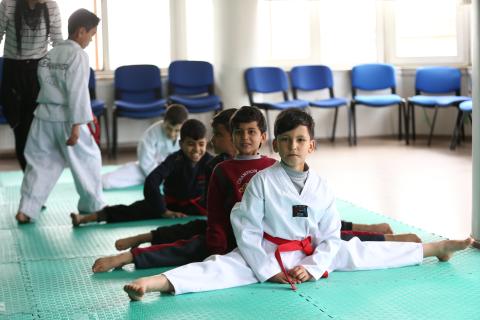 To keep up: TAEKWONDO

All children have the right to develop to their full potential – including the most vulnerable refugee children. 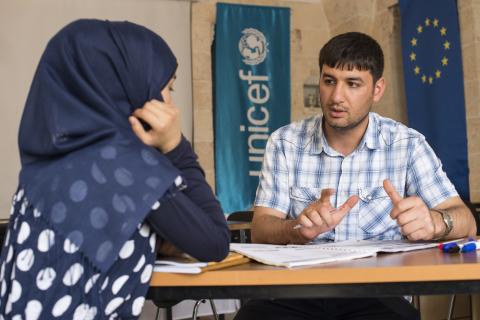 “I am so bored,” she admitted. “I can’t go to a regular Turkish school because I don’t speak Turkish. 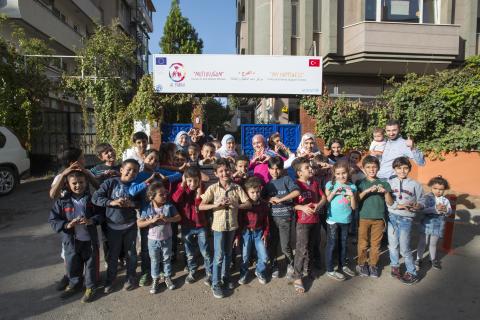 'This is our Safe Space'

Syrian children find a haven where they play, learn and cope