UNICEF works together with government and partners to make cities and communities places where children feel safe, while being heard and nurtured.

Recently, the influx of almost 4 million Syrian refugees – of whom 1.6 million are children – to several provinces also pushed the demand up for more public services and resources at the local level. In this context, particular local governance needs and priorities for children should receive special attention.

Globally, The Child Friendly Cities Initiative (CFCI) is a  UNICEF-led initiative that supports municipal governments in realizing the rights of children at the local level using the UN Convention on the Rights of the Child as its foundation. It is also a network that brings together government and other stakeholders such as civil society organizations, the private sector, academia, media and, importantly, children themselves who wish to make their cities and communities more child-friendly. The initiative was launched in 1996 and has expanded worldwide. CFCI is aligned with Sustainable Development Goals. The 2030 Agenda for Sustainable Development -in Goal 11- specifically calls for making cities and human settlements safe, resilient and sustainable.

Reducing geographic, social and gender inequalities among children contributes to more equitable access to opportunities and services as well as reduce any social exclusion associated with child labor, migration and disability.

In Turkey, Child Friendly Cities and Communities Initiative (CFCI) started in 2014 in 10 provinces, to address challenges facing the most vulnerable children and adolescents in urban areas.  UNICEF  contributed  to  enhance  the  capacity  of  local administrations  to promote policies in favour of the most vulnerable  children and adolescents. Guidelines and  training  materials  were developed  and  implemented  to increase  the  capacity of municipalities  in child participation, child rights programming,  prevention of child marriage and child labour, as well as child focused strategy development, budgeting and resource allocation. In total, UNICEF has  reached  40  provinces  and  94  municipalities  at varying  levels  of engagement, covering  a combined  population  of nearly  2  million  children  indirectly.

UNICEF has implemented multi-sectoral  workplans  with  four municipalities  which have a combined  population  over 3.5 million  Turkish citizens and about 600,000  refugees, including 1.3 million children

UNICEF also closely collaborates with the Union of Municipalities of Turkey (UMT) to make CFCI guidelines and training materials available to a wide range of municipalities across the country. 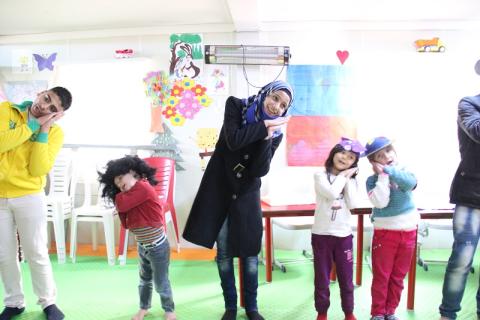