Michael Thomas (name changed to protect the identity of the child) was 13 before he lived in a real home. He grew up in a children’s home for orphans, or those without families capable or willing to care for them.

The privately-run facility put a roof over his head, but did little else to provide shelter or a childhood. He was often hungry, burdened with heavy chores, with little time to study and none to play. Worst of all were the beatings. Harsh canings were routine.

Michael began to rebel. He stole. One time a phone, another time fruit. He started slipping in school. He escaped frequently and slept on the streets for weeks on end, only to return for the inevitable caning. “I kept coming back because I had no other option,” he says. Sometimes he would disappear for weeks, once he was gone for two months.

In June 2018, the management of the children’s home accused Michael of stealing. Upon entry into the court system, Michael was assigned a social welfare officer who recommended that he enter a diversion programme run by the NGO KIHUMBE. Diversion, also referred to in Tanzania as Community Rehabilitation Programmes (CRP), diverts children accused of misdemeanour crimes (or with criminal histories) from the legal system and possible detention, and instead places them in programmes that address the underlying issues leading to criminal behaviour. KIHUMBE runs a six-month afterschool programme that provides therapy, support, life skills, and vocational training.

“We believe that prevention is better than the cure,” says Hon. Judge Robert Makaramba, Head of the Mbeya High Court that serves the Southern Highlands and houses one of 130 designated juvenile courts in the country. Many people will not report an abused child, but will report a child offender. “They only see a criminal, they don’t see a child,” says Makaramba. Many cases of child crime are in fact “classic protection cases” that call for a comprehensive approach, he adds.

Shortly after Michael began the diversion programme, the children’s home threw him out. They didn’t believe he would change. A team of 10 professionals convened to discuss his case including his social welfare officer, the police, and KIHUMBE, who collectively decided to place Michael with a Fit Family. “It is almost always better for a child to be in a home environment than an institution- any home, any family,” says Happines Nanta, the social welfare officer who oversaw the case. The Fit Family programme is a core service of Tanzania’s child protection system. Developed by the government with UNICEF support in 2013 (and now present in 58 of 185 districts in Tanzania), the programme relies on community volunteers to provide temporary care for children with protection concerns. Community members are recruited, vetted and trained as Fit Persons by social welfare officers (and other partners) and provide a family environment and guardianship to children placed with them.

Michael was placed with Margareth Magehema, a grandmother and mother of five. Margareth says that taking in a child in need was a natural choice. “I am used to taking care of people- orphans, relatives, even people who just have no place to go. This is what we do.”

“Children need support and freedom. Now I realize how important these things are. I didn’t have them before.”

After two months of living with Margareth, she says there has been a “huge change” in Michael. When he first arrived, he was wary and withdrawn and would not cooperate with others. Now he wakes early for chores, is doing well in school, socializes, and even does homework into the night, she says. Michael says living with a Fit Family has helped his “self-discipline at school and home.” This shows in his school work; he is now among the top three students of more than 100 in his age group in school.

There is no caning at Margareth’s, only guidance and mutual trust. “Now I feel safe. I have everything I need. All I have to do is ask, and I am given without fear,” he says. When he has children of his own, he does not want them to fear him.

The remarkable drawings illustrating his Standard VI (grade 6) anatomy notebook reveal Michael as a talented artist too. He wants to become a doctor. When asked where he would be without the programme, Michael looks down. After a long silence, he says “I don’t know.” Michael will live with Margareth during the six-month programme. He does not know where he will go next, but knows it will help his future. “One day at a time,” he says. For Margareth, parting with children after the programme is bitter- sweet. “I am both happy for them and sad for me to see them go,” she says. 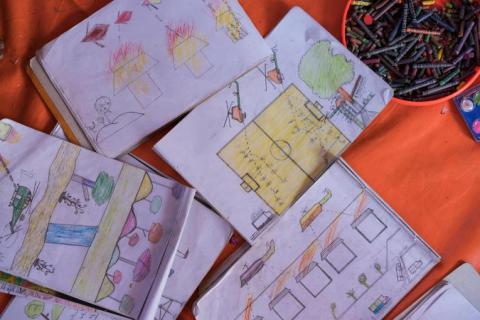 Children under attack at shocking scale

in conflicts around the world, says UNICEF

Make migration safe for every child in 2018 – UNICEF