"My mother wouldn’t let my younger siblings play outside so that we didn’t use too much water showering and doing laundry.”

“Half of our apartment was gone. Even the bathroom, the water tanks and pipes were all destroyed or looted.” That’s how Itisam, a mother of four, found her home in Teir Maleh village when she returned after two years of displacement.

But it wasn’t only Itisam who found her home destroyed and had lost all access to water; Teir Maleh was just one of 10 battle-ravaged villages in north rural Homs that suffered serious damage to their water infrastructure during the conflict, leaving nearly 50,000 people with no access to safe drinking water for four years.

Instead of saving up money to repair the house, Itisam had to spend her already modest resources on buying costly trucked water from private distributors, “and we needed to prioritize drinking and cut down on washing and hygiene,” she recalls.

Among returnees to the village was also Bayan, 14, and her family. Although the fighting had caused serious structural damage to their home, they had to take the risk of staying there for lack of other affordable options. Like Itisam, Bayan’s family had to rely on unsafe water from local wells and costly private trucks, “Water was in short supply and of poor quality. It gave me kidney problems,” she recalls,

“It also meant we had to ration water to the extreme. My mother wouldn’t let my younger siblings play outside so that we didn’t use too much water showering and doing laundry.”

But this summer, thanks to the UNICEF-supported rehabilitation of the water pumping station and two of its main water pipelines, these families have more access to safe water. With UNICEF’s assistance, the provision of safe-drinking water in Teir Maleh and other nine war-ravaged villages increased from zero to 50 litres per person per day.

“We no longer need to buy any water; there is running water that is sufficient and safe,” says Itisam as she and her children fill some jerrycans from a neighbor’s water spout. She now can save up money to buy a new water tank for her own home.

“It’s much better now.  We can comfortably drink, wash and do our chores as needed, and we have no concerns for our health.”

Funded by the Government of Kuwait, the water station’s rehabilitation included the provision of water pumps, electrical panels, a power generator and a water sterilization system. In addition, with thanks to the Swedish International Development Cooperation Agency (SIDA), two main water pipelines were repaired with high-density polyethylene pipes. 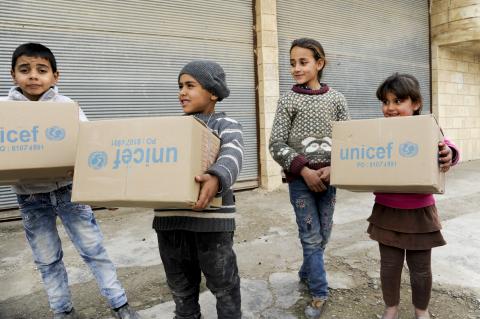 UNICEF distributes winter clothes to children in Raqqa
4,500 winter clothing kits distributed thanks to France, Canada and the Department for International Development (DFID)
See the story 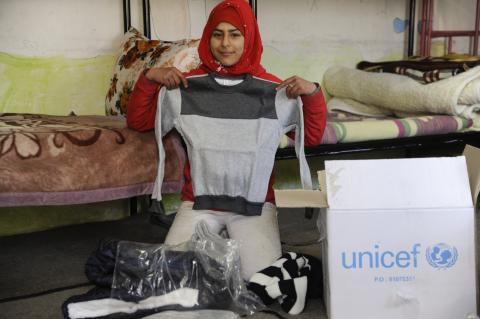 Children in Manbij keep warm thanks to UNICEF
14,000 winter clothing kits distributed to children aged 0-14, thanks to Spain and the Department for International Development (DFID)
See the story 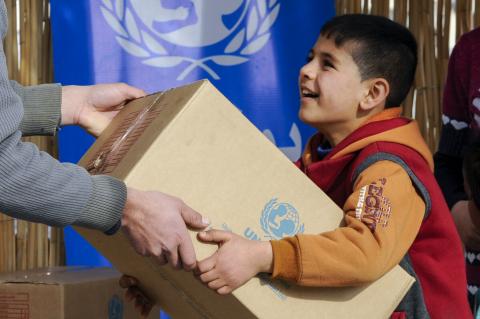 UNICEF protects children in Raqqa against the cold
Thanks to a generous contribution from France, Canada and the Department for International Development (DFID)
See the story 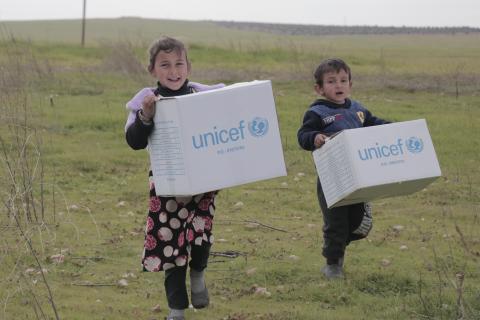 UNICEF completes last round of winter clothes distribution
600 blankets and 16,000 clothing kits for children aged 0-14, including for 300 new-born babies, across the governorate.
See the story