One mother’s action to prevent malnutrition

For Sarah Mohammed, the journey to motherhood was not an easy one. The 34-year old from El Obeid, Sudan, spent six years desperately visiting doctors and taking test after test to unearth any potential cause delaying her pregnancy.

However, nothing concrete was discovered and doctors had concluded it was likely due to her husband having to travel much of the time for work. Though the couple eagerly wanted to start a family, his travel meant they were unable to spend long periods of time together.

Sarah started to share her experience with me regarding the fertility treatment she sought, including one cycle of Intrauterine Insemination (IUI), which was unsuccessful.

“To our amazement, after the IUI failed, I fell pregnant with my daughter naturally the following month. We were so happy,” Sarah beamed.

When I first met Sarah in May, I was at a UNICEF-supported focus group discussion with young mothers, organised by the Ministry of Health in Al Kalakla, on the eastern bank of the White Nile in Khartoum. The objective of the workshop was to gain better insight into the nutrition knowledge, habits and behaviours of first- time mothers and how these habits impact their child. The findings will be analysed and used to inform current programmes in the country, in addition to being published in a global UNICEF report focused on young mothers’ experiences. Sudan is among 15 countries participating in the study due to be released in October 2019.

As she carried Ritag, her now 8-month-old daughter, in her arms, the joy in Sarah’s eyes was infectious and their bond hard to miss. As we talked, Ritag would playfully reach out to me while flashing a cheeky grin. Sarah, like her husband, used to work as an engineer but is now a stay-at-home mum and would not have it any other way.

“Me and Ritag’s father are both very much involved in raising our daughter the best way we can. He is a very present father and helps me with her all the time,” said Sarah. “I wanted to attend the workshop because I want to learn more about what is best for our child.”

UNICEF strongly believes that the first 1,000 days of a child’s life are critical and have lasting effects. The involvement of a father in those precious moments of play and nurturing and their involvement in ensuring good nutrition, can positively affect the baby’s brain development. In addition, it paves the way for the child to have the best start in life.

“Me and my husband usually scour the internet for as much information as possible to find the best parenting tips,” Sarah said. “For example, I know my daughter is healthy because I regularly take her for check-ups and weight and height measurements at the clinic and vaccinate her, but at 8 months old, she still wears size zero clothing.”

In Sudan, levels of acute malnutrition remain above the World Health Organization (WHO) emergency threshold in 11 out of the 18 states. Approximately 2.5 million children under five suffer from malnutrition annually, out of whom 700,000 suffer from severe acute malnutrition. Malnutrition is largely caused by poor water and sanitation conditions, high disease prevalence, increased food costs, poverty, as well as negative feeding practices and habits such as lack of food variety and essential nutrients.

UNICEF Sudan is working tirelessly to treat and prevent malnutrition in Sudan including the provision of both nutrition specific interventions such as the treatment of severely malnourished children, micronutrient supplementation, counselling on good infant and young child feeding and care practices as well as nutrition sensitive interventions including vaccinations.

As the study calls for details regarding nutrition habits, Sarah then began to reveal the type of food they typically consume at home.

“When Ritag was 4-months old, I used to let her taste soup and mulaah (a type of traditional Sudanese stew) with my finger. At 6 months I moved her to solids,” she said. “Today, her typical meals will include rice pudding, custard, cream cheese, chicken, meat and other Sudanese dishes.”

Sarah’s objective is to improve their eating habits. She hopes to learn more, through workshops such as this and additional awareness-raising activities in her community, about how to improve her daughter’s diet to ensure she grows up healthy and happy.

The dedicated mum is now encouraging other parents to take time to educate themselves about the best nutrition for their family, and for both mothers and fathers to share the responsibility. 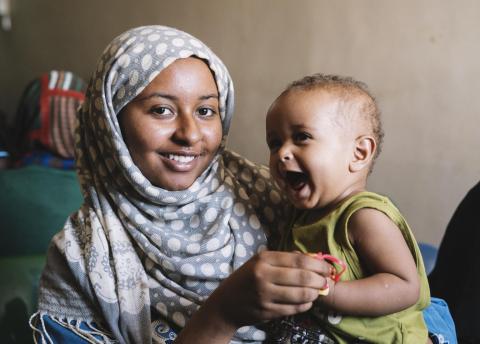 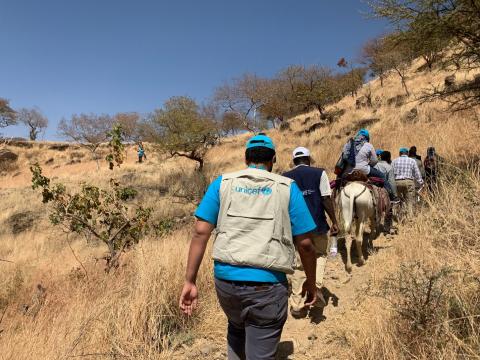 The Government of Japan, UNICEF, support the provision of essential and lifesaving services of 40,000 children and their families in Jebel Marra 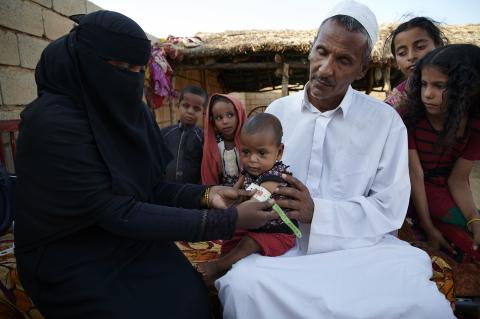 From Kassala, a grandfather helps his grandson recover

The role of men in protecting children from diseases in Kassala 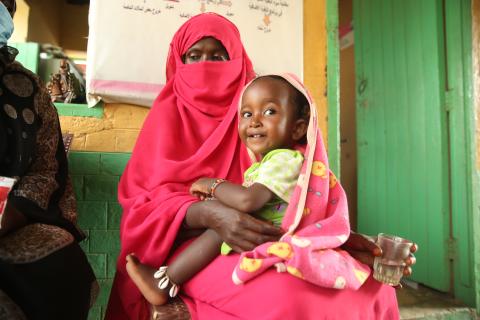 “She is beautiful, and I want to see her in good health”