In the Philippines, rebuilding hope amidst the rubble of urban warfare

Five months of urban warfare devastated the city of Marawi. More than two years later, children are still trying to pick up the pieces.

MARAWI, Philippines  –  “When I first heard explosions, we all ran. We didn’t take anything.” That’s how 17-year-old Jason remembers the day in May 2017 that changed his life forever.

Today, Jason stands amidst the rubble of what was once his home in Marawi, on the southern Philippine island of Mindanao. Five months of intense urban warfare devastated Marawi when Philippine armed forces fought to retake the city after it had been taken over by non-state armed groups.

“It was noon and I heard helicopters and other noise,” says 12-year-old Jalaisa, who lived in another part of the city. “Someone knocked on our door and said we should leave. They said if we didn’t, no one would be left [alive].”

The scars of war

Jason and Jalaisa managed to escape the carnage, initially fleeing to relatives’ homes a safe distance from the fighting. But, as the siege dragged on, they moved with their families to a tented evacuation site on the outskirts of Marawi, where they still live today.

The United Nations verified 56 attacks on schools, education personnel and health-care facilities during the siege, a result of the fighting and bombardments. Now, Marawi is left confronting a complicated mix of both short- and long-term harm.

For Jason and Jalaisa – and many others – the question has gradually shifted from when they will be able to return home, to whether they can go back at all.

“We thought it would only last a few days,” Jason says. “It was hard for me seeing the place where I was born being destroyed.”

The use of explosive weapons with wide area effects in populated areas like Marawi is devastating, especially for children, who are likely to be found in places – like markets, playgrounds and schools – that are often hit.

Not only are children globally disproportionately likely to be killed by explosive remnants of war, but those surviving frequently face lifelong disability and emotional distress. They lose loved ones, their homes, access to health care and clean water. In short, they are robbed of their childhood.

The disruption to education can be particularly damaging.

Jalaisa says she missed a year of school. “I cried because I couldn’t go,” she says. “I kept thinking that I couldn’t help my family anymore because I wouldn’t have an education.”

“It’s hard for me to be out of school because it hurts when people tell you that you aren’t educated,” Jason says.

For Jason and Jalaisa, losing their old schools isn’t just about the destruction of the actual buildings, but everything else that came with them. “I miss my classmates and friends most,” Jalaisa says. “I don’t know where they are now.”

Jason is still in contact with some of his friends, who live in nearby towns. But living at the evacuation site makes it hard to visit anyone. “We were like siblings since we were little, but now I don’t really see them,” he says.

The impact of the devastation of the battle will be felt for years to come, especially as Marawi is located in what was already one of the poorest provinces in the Philippines. Helping the area recover is a priority, but so is preventing urban warfare from ravaging towns and cities in the first place.

In early October, representatives of government, the United Nations and civil society organizations active in this field joined the Vienna Conference on Protecting Civilians in Urban Warfare to discuss ways to better protect civilians caught up in urban conflicts. But for Jason and Jalaisa, the damage has been done. Their lives have already been upended and they have lost not only their chance for a regular education, but also the day-to-day mementos and objects that are sometimes taken for granted.

“I miss my [basketball] jerseys and the trophy I got for being the most valuable player in the basketball tournament,” says Jason, wistfully.

Jalaisa misses her cat, Orange. “When the guns started, the cat was afraid and ran away. I couldn’t find her,” Jalaisa says. “I cried because I missed her.” 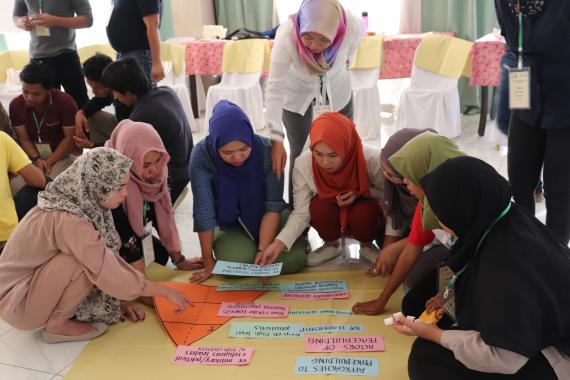 DAVAO CITY, Philippines – Decades of conflict between the government of the Philippines and various armed groups have left the Bangsamoro Autonomous Region in Muslim Mindanao (BARMM) grappling with poverty, displacement, poor health and limited access to education.

But the region’s people – especially its youth – are looking to turn the page.

“If the voices of young people could be heard we could start to tackle all of our problems,” said a young man at a recent gathering of youth leaders in Cotabato City, in BARMM. “If we raise our voices on displacement, health and education, the government is going to have to respond to that.”

He’s looking over some photos that are spread out over a table, each meant to symbolize a different set of challenges faced by the region. One photo shows some tents that are being used to house those displaced by the fighting. Another picture shows a class being held outdoors. A third, a nurse looking after a family. He eventually settles on a photo of a barbed wired fence, placing it at the centre of the scattered images.

BARMM was created in February 2019, a result of the peace process between the Government of the Philippines and the Moro Islamic Liberation Front. The new regional government, which holds new fiscal and political powers, has promised greater inclusion, development and prosperity for the region.

As a result, the region – one of the poorest in the Philippines – is at a crossroads. And its young people are determined to play a key role in deciding which path BARMM takes next.

Many of the region’s young people belong to a vibrant and growing ecosystem of youth organizations and networks who have offered a wide-range of proposals for improving their communities – from education projects to ones focused on the relationship between the regions’ different indigenous groups and religions. Ultimately, young people in the region want to ensure that the new government listens – and responds – to their needs.

UNICEF recognizes the critical role these young people are playing in the region’s transition and is working to strengthen the peacebuilding skills of existing youth networks. In partnership with the Mindanao Peace Institute, UNICEF has trained 50 young leaders on peacebuilding. Their networks collectively represent some 15,000 young people who are now implementing peace workshops across communities in the region.

“UNICEF believes that young people’s ideas, passions and innovations could transform the future of the Bangsamoro people,” says UNICEF Philippines Chief of Field Office in Mindanao Andrew Morris. “For this to happen, children and youth must be consulted, empowered and equipped to make informed decisions, especially on matters affecting their health, well-being and prospects for the future.”

Another goal is to bring the voices of young people directly to the new government. UNICEF is therefore working with youth networks and the Office on Bangsamoro Youth Affairs to rally young people around the creation of a new Bangsamoro youth agenda.

UNICEF advocated with the BARMM Government to hold a Special Parliamentary Session on 20 November to commemorate the 30th anniversary of the Convention on the Rights of the Child.

Through a participatory process over the past several months, children and adolescents have formulated an Action Agenda outlining the vision and aspirations of Bangsamoro children and adolescents. The special session will consider issues affecting children in Bangsamoro with the goal of agreeing commitments and concrete action plans such as establishing child-friendly legislation and policies, and investment for children.

“This is a once-in-a-lifetime chance for youth to shape the future of the Bangsamoro people, says Marjanie Mimbantas Macasalong, executive director of the Office on Bangsamoro Youth Affairs. “During our series of consultations with young people, we ask them not only about the problems, but also about their proposed solutions.”

UNICEF’s engagement with young people is just one element of its broader strategy in BARMM, which is based on expanding and strengthening the delivery of services, including education and health, and helping bridge divides between communities.

The people of the region hope to usher in a brighter, more peaceful future, and its young people are ready to turn this hope into reality. 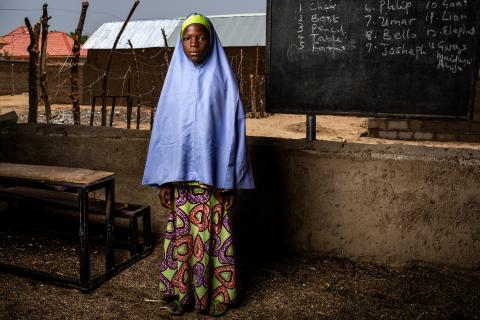 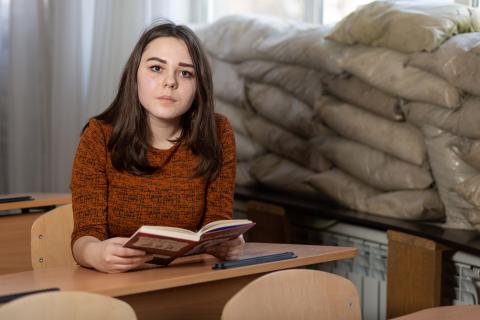 In eastern Ukraine, abnormal has become routine
After more than five years of conflict, preparing for danger is sadly commonplace for schools
Read the story