In Nigeria, a new start for children who survived abductions

When Fati was taken by an armed group in her hometown, she thought she'd never see her family again.

BORNO, Nigeria – Fati* smiles, waving as the van pulls out of the transit centre in which she has stayed for two months. After being held for three years by a Boko Haram faction in northeast Nigeria, she is finally going home to her family.

Not so long ago, she feared she might not ever see them again.

In 2015, then 14-year-old Fati was shopping for dinner at a market with her mother. But that afternoon, her life took a tragic turn: an armed group attacked the market, abducting all the girls and killing most of the men.

“I was so scared. I had heard about these attacks but I never thought it would happen to me. I thought I was going to die,” Fati says. Her fear nearly came true.

Fati and the other girls were taken to the Sambisa Forest, where the Boko Haram faction is said to be based. There, she joined the many other girls who had been abducted in raids by the group.

Food was minimal – the girls ate just one meal of instant noodles a day. They were locked in a mud hut and only allowed out to use the bathroom.

One morning, they were asked to bathe, and then to line up. A group of men came and chose wives.

“I refused. I did not want to be married; definitely not to a man I did not know,” Fati says.

Fati was flogged 100 times for her refusal, and dumped in a room with 20 or so others who had also refused to be married.

The men eventually returned and told her she was to be married, but again she refused, along with two other girls. The three girls were flogged again and thrown back into the hut.

Later, the girls were approached for a different reason: they were to become suicide bombers.

Fati's story mirrors that of others who have been caught up in the calculated and repeated use of children, especially girls, as ‘human bombs’ in northeast Nigeria over the last few years.

“We were told that we had a bigger calling and that we were going to save mankind. They asked us if we wanted to go to heaven. We all said ‘yes’,” Fati recalls.

From then on, life changed for the three girls. They were given two or three meals a day, better living conditions and were asked to recite prayers throughout the day.

One morning, a soldier walked into their hut and gave them brand new vests to wear under their clothes. He told them to approach a military checkpoint and press a white button that he promised would "send them to heaven".

Taking fate into her own hands

Fati did not understand the connection between the vest, the button and God. She decided not to push the button and watched as her two friends detonated themselves at the military checkpoint, killing two soldiers. She raised her hands and told the soldiers she also had a bomb, but did not want to detonate it. The soldiers helped her remove it and took her to a military detention facility.

Fati’s case is not unusual. The conflict in northeast Nigeria has seen non-state armed groups regularly use children as suicide bombers. In 2017, 146 children (mainly girls) were used as human bombs. In the first six months of 2018, 43 children were used in this way.

"When I saw her, I cried... I never thought this day would come."

Coming back to life

Fati is one of more than 200 children taken into administrative custody before eventually being cleared of ties with armed groups and released. These children were sent to a UNICEF-supported transit centre in August 2018, where they were provided medical and psychosocial support, learning and life skills.

UNICEF was also able to locate Fati’s family. Some three years after being taken, Fati and her mother were reunited at the transit centre.

“When I saw her, I cried,” Fati says. “I never thought this day would come. My mother was crying too. We could not speak – we cried for a long time.”

As Fati reflects on returning to her community, she’s full of hope and optimism. “When I get home, the first thing I want is to eat my mother’s pepper soup and then go and register in school,” she says, smiling. And while Fati has undoubtedly been changed forever by the ordeal, she has not allowed her dreams to be taken from her – including one of becoming a teacher.

In addition to family tracing, UNICEF, with the support of the EU and Governments of Germany, Sweden and France, Norway and Switzerland, supports the reintegration of survivors by helping to return them to their communities and offering psychosocial support, education, and providing opportunities to improve their livelihoods through vocational training and informal apprenticeships. 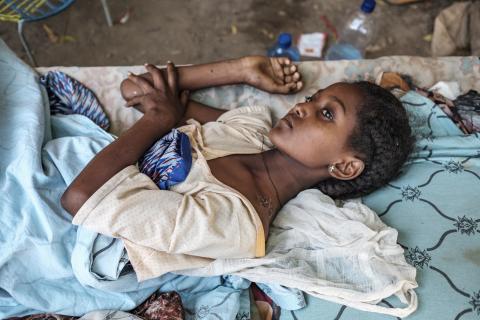