In Namibia, preventing measles and rubella in remote communities

The remote shores of Lake Liambezi are far from health and social services, leaving these communities vulnerable to diseases and other health issues.

Like hundreds of men and women in the Zambezi region of Namibia, Jackson and Rosemary Muhanda make their living off of Lake Liambezi. But the remote shores of the lake are far from health and social services, leaving these communities vulnerable to diseases and other health issues. Learn how a new campaign is protecting families like the Muhandas from measles and rubella.

ZAMBEZI REGION, Namibia, 21 September 2016 – For the next three weeks, Jackson Muhanda, his wife Rosemary and their three infant grandchildren will camp together along the shores of Lake Liambezi in Namibia. They will be joining hundreds of other men and women who rely on this huge body of water to make a living.

As the earliest rays of the sun break the horizon, Jackson and Rosemary brave the blistering cold waters to go about their work for the day: catching fish and selling wares to the fishermen.

While making his way around the lake, Jackson skilfully identifies hippopotamus spoors and avoids areas where his family will be endangered. But he also knows that protecting his family goes beyond fending off the physical threats of wild animals.

“My grandchildren are still very young and their young bodies can easily get diseases,” he says.

In Namibia, there is an ongoing measles and rubella immunization campaign, and Jackson’s three grandchildren were among the first to be vaccinated. He took them to Muyako clinic for their vaccinations before the family embarked on the 30 km trek to camp by the shores of Lake Liambezi.

“Our line of work requires that we spend as many days and hours as possible here, but it was more important for me to devote some time to have the children receive their vaccination shots before coming to camp here,” he says.

Triggered by sporadic incidences of measles diseases over the last two years, the Government of Namibia embarked on a two-week-long mass vaccination campaign, with technical and logistical support from UNICEF and WHO. The campaign aims to reach all people aged 9 months to 39 years – effectively vaccinating 79 per cent of the population against measles and rubella.

Both measles and rubella are highly contagious diseases which attack the respiratory system and weaken the immune system. Measles in particular affects millions of children throughout Africa, a continent already fraught with other childhood diseases such as diarrhoea and malnutrition – with health facilities that are few and far between.

“The introduction of this vital vaccine into our health delivery system is yet another commendable milestone in Namibia’s efforts to minimize the risk and consequences arising from vaccine-preventable diseases,” said UNICEF Representative, Micaela Marques de Sousa. “The campaign is an integral part of strategies recommended to achieve measles and rubella elimination.”

One effective strategy during the campaign has been to access remote communities such as the fishermen along Lake Liambezi, whose arduous jobs take them away from basic social services such as health. Fishermen are not opposed to the vaccines, but are often hesitant to leave their nets for too long to go to the nearest clinic, which is more than 30 km away. Mobile teams have therefore been posted in the fishing areas to bring vaccination services closer to the men and women who work there.

As another significant intervention, UNICEF and WHO have also supported the Ministry of Health and Social Services to raise awareness among vulnerable groups, helping to expand knowledge and acceptance of the value and safety of vaccinations and other health services.

Now that Jackson and Rosemary know that their family’s health is well covered, and they can fully concentrate on the three weeks of hard work ahead of them. After eating a hurried meal, they are ready to meet the demands of another day. 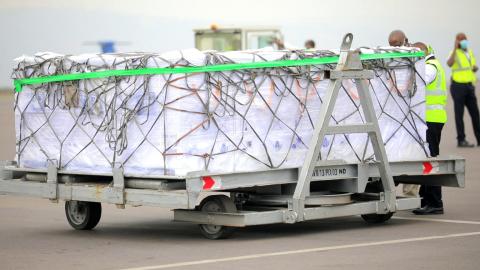 Remarks by Henrietta Fore, UNICEF Executive Director at COVAX media briefing on first deliveries and first round of allocations