In Kenya, a mother leads the movement to stop FGM in her community

KAJIADO/GARISSA, Kenya, 9 February 2017 – Mary Oloiparuni’s childhood came to an abrupt end when she was 13 years old. Now, at 30, she recalls that painful day as she sits in her homestead in Leboo Village, Kajiado County, surrounded by her five children.

The day did not come as a surprise, she knew about it. Her mother had told her that she would undergo the age-old tradition of circumcision, alongside her brothers. So when they came for her that morning at 6, she was ready, or so she thought.

She remembers the blood, so much blood, as they cut her. Then the pain. It was too much. She squints her face as she tells her story, as if she can still feel that pain 17 years later.

“It burned and burned. All day long, it burned. Until the goats came back from grazing in the evening,” she says.

The elders told her that she was now a woman, and somehow she felt a sense of pride without fully understanding what that meant. Soon afterward she was pregnant, and it wasn’t long before she dropped out of school.

The Maasai community where Mary comes from are known for their beautiful traditional regalia and rich culture. But behind the beauty is the ugly practice of Female Genital Mutilation (FGM) that is performed by 78 per cent of the community.

The national prevalence of FGM in Kenya stands at 21 per cent, according to the 2014 Kenya Demographic Health Survey. Communities such as the Maasai, Somali, Kisii and Samburu bear the brunt of this violation that was declared illegal in the 2011 Prohibition of FGM Act. Nonetheless, FGM is still practised in secret, violating the rights of thousands of girls and women.

On 6 February, the world celebrates the International Day of Zero Tolerance for Female Genital Mutilation. This year’s theme is ‘Building a solid and interactive bridge between Africa and the world to accelerate ending FGM by 2030.’ In Kenya, a local event will be held in Garissa County, north-eastern Kenya, under a localized theme – ‘Working together to End FGM in Kenya by 2030.’

In north-eastern Kenya, the Somali community has the highest prevalence of FGM. A shocking 94 per cent perform this violation, and 5 per cent of women and 6 per cent of men believe that it is required by their religion. Sheikh Hussein Mahad, a local religious leader, denounces this belief and insists that FGM actually goes against his faith.

“When you critically look into the religious evidence you find that circumcision is for the male child,” he says. “Islam is a religion of mercy but FGM is merciless to the girl child and therefore negates our belief. It is a harmful and unnecessary evil.”

Sheikh Hussein regularly preaches his firm beliefs about FGM to his community, hoping to bring about much needed protection for the girl child. He has partnered with UNICEF to engage in community dialogue to end this practice and though progress is slow, he is seeing a change in attitudes.

“In the beginning no one would listen but now they are more receptive,” he says.

For Mary in Kajiado County, she is committed to be that change especially for her four girls. Even though most of her community still practises FGM, she and her husband have agreed to protect their daughters and to keep them in school. Because of this decision she has received a lot of backlash from her neighbours who think she is going against their traditions.

“I tell them it doesn’t matter if I am the first and only one who stands against FGM, I will still stand. You can join me or not, but I am not going to circumcise my girls,” she says firmly.

Her eldest daughter, Nasei, is 15 years old and goes to Leboo Primary School. One day she would like to be a pilot. Many girls in her school have undergone FGM and they often ridicule her, saying that she is not a woman. But she carries her mother’s determined spirit to stand for what she believes in.

“I do not want to be circumcised because it can affect my health,” she says. “Many girls have now gotten pregnant and dropped out of school and I don’t want that.”

UNICEF works within the UN Joint Programme on FGM to support the Government of Kenya in accelerating abandonment of FGM. There has been a lot of progress in policy formulation and enacting legislation, but more still needs to be done at the community level to tackle age-old beliefs and traditions that harm children and limit their potential.

Mary insists that she wants her children to live a life without limitations in their pursuit for education. She believes that if her daughters are protected and educated they can achieve anything.

“I wish to see my girls advance in their education. I would like them to be pilots, or doctors, or working in offices. I just want them to have that chance.” 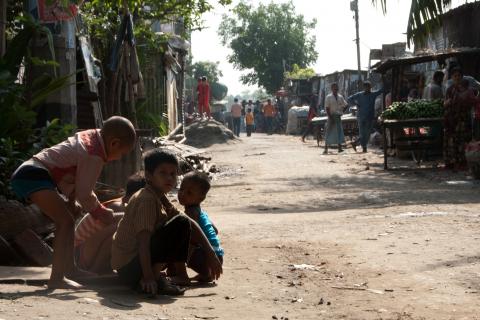