From Benin to Canada: An incredible chain of events

Some stories take 45 years to tell.

A school boy in Benin. A chance encounter in Canada. This story has been 45 years in the making.

In the 1960s, Canadian producer Denis Hargrave was on assignment in Benin when he met Nicolas Mignanwande. When he said good-bye to that 11-year-old boy, little did he know of what would be waiting for him 45 years later.

GANVIE, Benin / LIONS BAY, Canada – After a lifetime of making documentaries around the world, I’ve often wondered what became of my subjects after I met them and captured their stories.

This story begins 45 years ago.

I was a young producer with the Canadian Broadcasting Corporation (CBC) hoping my next assignment would take me to a hard-to-reach place. I wasn’t disappointed.

In 1968, I was sent to Dahomey (now Benin), West Africa, to shoot a documentary for the CBC and UNICEF. It was part of a series called “Children of the World.” I travelled to 10 countries to shoot the entire series but it’s that one from Benin that stands out.

The film was set in Ganvie, a village of 22,000 propped up on stilts in the middle of a large lake. Our assignment was to tell the story of a single child who was being helped by UNICEF.

That’s how I met Nicolas.

Where it all started: a UNICEF schoolroom in West Africa

He was standing in a small UNICEF schoolroom. It was the only school in Ganvie. Nicolas Mignanwande was a bright but shy 11-year-old who would become the subject of my documentary. There was something about him. He had a quiet confidence to him.

But in Ganvie, it was a struggle to survive.

Every day, Nicolas made long treks by canoe to the only water tap to ensure his family had clean water to drink. He fished, like all the other boys. Nicolas knew he was expected to be a fisherman like all the other men of his village, when he grew up.

“When you are born in Ganvie, you stay in Ganvie... I thought I would become a fisherman.”

I’d like to think it was during those long treks that he began to believe he could be something more.

I spent 10 days with Nicolas and his family capturing life in Ganvie and capturing the only hope that Nicolas had – that UNICEF school.

Then, the day came when I had to leave.

An unexpected turn of events

For 45 years, I often wondered what had become  of Nicolas.

In that time, I created many more documentaries and raised two children of my own, but I still thought of Nicolas from time to time – until last year.

That’s when I met a woman named Celine Ahodekon in Fort Langley, not too far from my home in Lions Bay, in British Columbia. That’s when this story took an unexpected turn.

Celine held a woven basket; it was bright. It was the kind I remembered seeing in Benin. I was drawn to her and we spoke about what life was like there today. I told her about my documentary, and then I told her about Nicolas. To my surprise, I discovered that she was from a village just hours away from Ganvie. She was intrigued and she promised to find out.

Celine contacted her nephew in Benin and he activated his community networks. Within a matter of weeks, unbelievably, he had located Nicolas who, even more surprisingly, was living just five kilometres away from him.

I never expected to find out what happened to Nicolas, but there he was. 45 years later.

I knew I had to travel back to Benin. I knew I needed to see Nicolas for myself. I couldn’t spend the rest of my life wondering what happened to him.

What I learned about Nicolas was better than anything I could have imagined.

Nicolas studied and he worked hard. He went from that simple UNICEF classroom to having a classroom of his own. He became a teacher. But that’s not all. He became the Supervisor of Education for Ganvie.

“…it was better than anything I could have imagined.”

Now, Nicolas is retired. But he hasn’t stopped working tirelessly to change things for his community. He’s busy giving girls in Ganvie the chance to learn and to be something more. He’s creating a girls’ school to help empower the future female leaders of Ganvie.

Today, in countries around the world, millions of children like Nicolas are reaching their full potential thanks to UNICEF supporters. We may not be able to know the ending to every one of those children’s stories but there are many more stories like Nicolas’ to be told.

Every day, UNICEF supports the education of millions of children around the world. Find out more about the results UNICEF has achieved for every child. 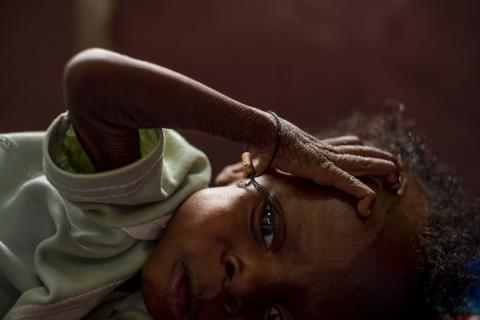