The fight against cholera in Yemen

As a cholera outbreak strains Yemen’s fractured health system, UNICEF is on the ground in the hardest hit areas

SANA’A, Yemen, 25 October 2016 – For 35-year-old Um Arafat, things couldn’t get worse. After rushing her six-year-old son to the hospital for a suspected case of cholera, the mother of seven has now herself been diagnosed and admitted in a room next door. Frail and disoriented, she tries to recount what happened to her son. Her daughter stands by her side and completes her sentences whenever her mother is too exhausted to speak.

“My son, who is already very weak, got loose motions two weeks ago. He has also been getting loose motions earlier as well,” she says, pausing to gather her breath. Her son Arafat looks on, discomfort clearly evident in his pale eyes.

Across the hallway, another mother, Um Dhia, caresses her one-year-old. “My son suddenly started passing loose stool at four in the morning. Within no time, he became very pale, his eyes rolled up and I thought he was going to die. We rushed him to the hospital,” she says. “By god’s grace my son is recovering now. On the first day, I changed his nappies 20 times in a day. Today I have changed it only once so far,” the mother says, her eyes moist and her hands folded in gratitude.

A cholera outbreak across Yemen is the last thing the conflict-ridden country needed, but it was also expected given the collapse of the health system. More than 600 health facilities are not functioning, and many of those that are functioning are either poorly staffed or are running on minimum operating capacity.

“A child can die if he or she doesn’t get appropriate treatment against the disease on time,” says Dr. Najwa Al Dheeb, the health and nutrition officer for UNICEF in Sana’a. “We are providing hospitals and health facilities across the country with oral rehydration salts, intravenous fluids, diarrhoeal kits and essential trainings of staff so that children who are admitted for cholera can be treated immediately.”

Across town in the Sawan area of Sana’a, a group of young volunteers go from house to house distributing UNICEF’s hygiene kits and counselling families on how to prevent cholera infections. They are working with the Yemen Foundation for Development and Response (YFDR), a local NGO that is supporting UNICEF. The volunteers mark every house they visit to keep track of the people they have reached.

“We are targeting this community as part of our cholera prevention plan, as this is the area where 11 confirmed cases were reported,” says Mohammed Mohammed, UNICEF’s water sanitation and hygiene officer who is responsible for the response. He explains that their strategy is three-pronged: “We are chlorinating all water sources as well as water tanks so that water is safe. At the same time we are distributing hygiene kits which include soap, washing powder, jerry cans, etc. to families. And lastly we are going from house to house explaining to families about how cholera is spread and how they can protect themselves against it.”

In the past two weeks, at least 18 cases of cholera have been confirmed across the country with the majority being in Sana’a – Yemen’s most densely populated city. Cases have also been reported in south and central Yemen. UNICEF and its partners are continuing their support to health facilities and at the community level in the midst of the ongoing conflict and instability.

Containing cholera is top priority for the children’s agency. An escalated outbreak would put many children like six-year-old Arafat through the harrowing and painful stages of this illness, and some would not survive.

>>  Learn more about the humanitarian needs of children in Yemen 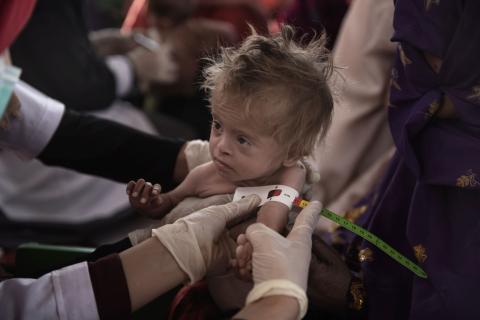 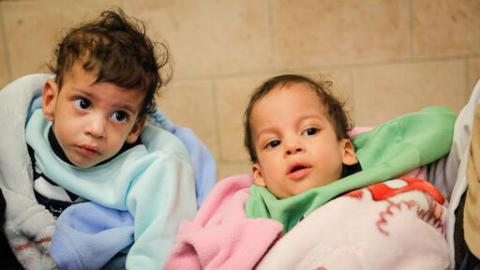