Faced with security risks while delivering food, UNICEF Somalia found a solution next door in Ethiopia

By Rebecca Beauregard and Patrick Codjia

DOOLOW, Somalia, 30 June 2017 – Faisal Bule sits with his daughter, 18-month-old Dahran Faisal, at the nutrition centre in Doolow, a town in southern Somalia on the border with Ethiopia. Dahran is one of the newly admitted patients at the centre’s Outpatient Therapeutic Programme.

They were forced to leave their home village because of a severe drought that started in December 2016 and has been affecting the lowland areas across the Horn of Africa, particularly Ethiopia and Somalia, as well as Kenya, South Sudan and Uganda.

They are among the 6.7 million people – over half of Somalia’s population – who need humanitarian assistance. More than one million children are expected to suffer from acute malnutrition during 2017.

Dahran suffers from the most serious form of malnutrition – severe acute malnutrition – which is expected to affect 277,000 children in Somalia this year.

After the staff check Dahran’s health, Faisal is given a supply of a nutrient-dense peanut paste known as ready-to-use therapeutic food to take home. He will bring Dahran back to the centre for regular monitoring.

Until recently, it would have been much more difficult to reach Dahran with her life-saving treatment.

Dahran received treatment as part of a programme implemented by UNICEF and its partners. The programme aims to increase coverage by treating children in Somalia who suffer from severe acute malnutrition, but who have no other complications or illnesses, as outpatients at nutrition centres. The treatment includes providing caregivers like Faisal Bule with a supply of ready-to-use therapeutic food for their children to take at home.

Traditionally, foodstuffs would be delivered from offices in Somalia throughout the country to reach children in need of treatment. But delivering supplies from the Mogadishu and Berbera ports to areas in south and central Somalia such as Doolow, South Gaalkaiyo and Beletwyne – towns situated along the Ethiopia border – has posed security challenges. UNICEF Somalia set about finding a solution to deliver urgent supplies to partners in these areas.

The solution was next door. It turns out the key would be to deliver therapeutic food produced locally in neighbouring Ethiopia directly to the border towns. The journey would begin in Addis Ababa and cross the border to Doolow. From there, the food would be distributed to health facilities to treat severely malnourished children like Dahran.

UNICEF worked closely with the government to facilitate the shipment. However, the journey from Addis Ababa posed some challenges. Drivers Henok Fisiha and Shiferaw Abebe each steered a fully loaded truck over 800 km to the border through dust storms and flooded roads.

“This is our job and we are used to it. We have done this many times, but this time it was humbling to know that we were delivering such critical supplies for children in Somalia,” says Henok. Shiferaw adds, “I saw on television the situation both here and in Somalia. I have little brothers and sisters and this could have been them. I am proud to have been part of this.”

It took six days to reach Doolo Ado, a small Ethiopian town 3 km from the border. From there, they drove into Somalia delivering the supplies to the UNICEF warehouse in Doolow. The two drivers then immediately turned around and drove back to Addis Ababa – arriving home two weeks after they had started.

As communities on both sides of the border grapple with consequences of protracted drought, UNICEF, with the support of committed donors and partners, will continue to implement innovative solutions to reach children and their families. After the successful deliveries, the two offices are in discussion to expand this supply chain initiative to include regular deliveries of medical supplies at this same border point, which would significantly reduce the time it takes to reach those in need and help save lives. 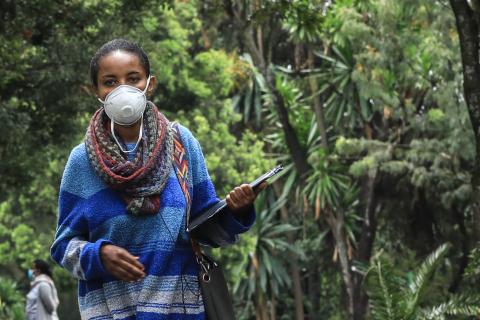 In Ethiopia, social workers show they’re essential
The coronavirus pandemic has forced many migrants, including children, to return home. Social workers are helping them do so safely
Read the story