Education under fire: Schools in Aleppo damaged in renewed fighting

The 1070 intermediary school for girls was built by UNICEF in 2013 and provided a respite for displaced children in the neighbourhood. But after heavy bombardments on 31 July, students fled and never returned

ALEPPO, Syrian Arab Republic, 22 August 2016 – The life of a child in Aleppo has become even more dangerous in recent weeks, as intense attacks and fighting escalate across the city. At a time when children are at even greater risk of bombardments and fighting in the Syrian Arab Republic, education has become another casualty. Schools in Aleppo have come under attack, with many occupied by fighters and left destroyed or damaged.

The 1070 neighbourhood school provided a respite from what is often a harsh reality for 5,000 families who lived in the half-built concrete tower blocks of the settlement for displaced families in the suburbs of western Aleppo. As families fleeing the fighting in rural areas resettled in the neighbourhoods of 1070, Tishreen and Al-Riyadeh in 2013, existing schools became overstretched. The 1070 school became a place of hope where children could start to build new futures.

Across Aleppo city, UNICEF has installed a total of 130 prefabricated classrooms in response to the education needs of displaced children.

UNICEF built the new 1070 school, the only girls’ intermediary school in the neighbourhood, installing 17 prefabricated classrooms with toilet and sanitation facilities. Starting with 660 students, an additional 15 prefabricated classrooms were installed in 2015, and through UNICEF’s ‘Back-to-Learning’ campaigns at the beginning of the academic years in 2014-15 and 2015-16, enrolment increased to 2,500 students.

“The chance to live moments of their lost childhoods”

Hanaa Singer, UNICEF’s Representative in Syria, visited the 1070 school in February this year to meet students and teachers.

“Despite the squalid living conditions around them, the children in this clean, organized school were happy and energetic. The school gave them the chance to live moments of their lost childhoods,” said Singer. “I was so inspired by these girls and their passion for education. Despite all the hardships they have been through with their families being displaced by the fighting, it did not stop them from seeking their dreams of an education.”

But the girls also told Singer of the dangers they faced just to come to school, and of their fears of going out to play in the playground during the breaks.

“I listened in disbelief as the girls informed me about the sniper nearby, who seemed to take pleasure in tormenting the students by aiming at them every now and then, to scare them off. All the children asked for was ‘a wall’ to protect them and allow them moments of respite during breaks,” said Singer.

UNICEF responded quickly, working with the school to build a steel wall to allow students to safely enter the school, and be able to play and move about in the grounds. With the wall completed within days, 16-year-old student, Ahlam, who met Singer on her visit, had an idea: “Why don’t we paint it? It looks very dull!” And as students designed and painted the wall in bright colours, they dubbed it “the wall of hope”.

When fighting escalated on 31 July, mortars and bombardments forced the already displaced families of the 1070 neighbourhood to flee yet again. The head teacher of the 1070 school told UNICEF about that day:
“When the attacks started, students were at school attending remedial classes. At 11:00a.m., we heard explosions nearby and immediately sent all the students home. We thought that it was the usual situation, and that we would return to school the next day. But we never came back.”

With ongoing fighting still affecting the neighbourhood, 35,000 people remain displaced – some are sheltering in emergency relief centres, some with families and friends, and others in mosques and parks and streets. The 1070 school is badly damaged. On 9 August, the head teacher was able to briefly visit the school.

“I saw broken glass, windows cracked, doors destroyed. I saw books scattered on the ground everywhere mixed with the remains of shells and bombs. The walls of the side of the school that is exposed to snipers are filled with bullet holes. One prefabricated classroom is badly burned.”

The school was hosting summer remedial classes to help children catch up on years of missed education as a result of the conflict, as well as psycho-social support activities to help children cope with the trauma of the violence all around them. With families dispersed, and the school in an active conflict area, all this has stopped. The head teacher told UNICEF:

“This school is like home for me. I was the head teacher since it opened in 2013. If it was completely destroyed, I would help rebuild it, brick by brick.”

Since 31 July, in Aleppo, 12 schools have been damaged by bombardment and fighting, with another eight schools occupied by fighters. All 20 schools are in neighbourhoods surrounding the 1070 school.

Children’s access to education in Aleppo is threatened, just as students all over the Syrian Arab Republic are due to go back to school in September. UNICEF is gearing up its support in Aleppo and across the country, including its focus on helping the 2.1 million children out of school get back to learning. But students and teachers still don’t know when they will be able to return to their cherished 1070 school.

UNICEF is working with Aleppo education authorities to make sure displaced students do not miss out on education. With so many schools damaged or still affected by the fighting, alternatives are being planned. At the same time, UNICEF is preparing to scale up its self-learning programme, designed to support children continue learning until they can return to school.

In February, 16-year-old Ahlam told UNICEF, “My friends and I know that without coming to school we won’t have a future.”

UNICEF has scaled up its relief efforts for the now 35,000 people displaced across the western parts of the city by recent fighting. UNICEF is supporting mobile clinics outreaching with paediatric, nutrition and maternal health services to displaced families, as well as mobile pyscho-social support teams. With partners, UNICEF has delivered clothes for displaced children.

The whole city of Aleppo faces a water crisis, putting children and families in danger of outbreaks of waterborne diseases.

Just as schools have been damaged by the current escalation of fighting, so was the key electricity infrastructure needed to power water stations that pump water to the entire population of two million. Ongoing fighting still prevents repairs. In response, UNICEF and our partners massively scaled up emergency water services. But repairs to electricity infrastructure are critical as pumping water is the only way to meet the needs of the city’s two million residents. Unless water pumping is restored children and families will be forced to resort to unsafe water sources, with grave risk of outbreaks of waterborne diseases. 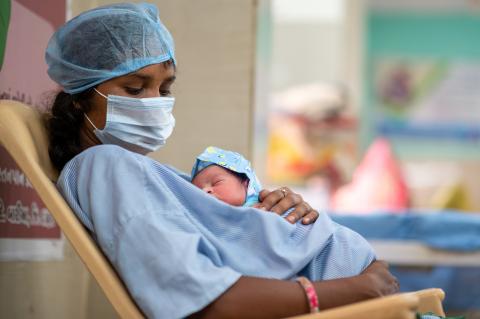