After more than five years of conflict, preparing for danger is sadly commonplace for children and teachers in eastern Ukraine.

MARINKA, Ukraine – In amongst the pictures and messages they’ve sent to friends and family, children at Marinka #2 school in Ukraine also have a draft text message ready to go. It’s a message that no child should have to send. But for the children attending school near the so-called contact line between government and non-government-controlled areas in eastern Ukraine, it’s one that’s all too familiar.

“Mom, I am okay. I am in the school bomb shelter.”

The children are sending the message again today. They were supposed to be celebrating the opening of a new playroom, but as the sound of shelling reverberates through the walls of the school, the children are instead calmly lining up in pairs.

“Every teacher, and every child, knows what to do if the shelling starts,” says Liudmyla Panchenko, a teacher, noting that regular evacuation drills and learning how to take cover in the school’s underground bomb shelter have become a routine part of children’s education.

“Everybody is used to this by now. There’s no panic anymore,” Liudmyla says as teachers help to guide children to the rooms in the school that are farthest from the shelling. Several children had prepared speeches for the playroom opening, a project supported by Save the Children, UNICEF and the European Union. For now, those speeches must wait.

Mariia, 13, appears unfazed by what is going on today. “This is nothing,” she says as she nods toward a window. In the distance, a column of smoke can be seen rising up from where a shell has landed. For Mariia, the conflict has already taken a heavy toll – her family home was destroyed by a shell.

Mariia and two of her friends, Dasha, 13, and Hrysha, 12, are heading to the cafeteria, where sandbags have been placed at the windows, until the latest round of shelling stops. They say they are used to the sound of shelling because they hear it at night, too – they both live close to the contact line.

For many children living near the contact line, the school has become one of the few places where they can spend time together in relative safety, although it has also suffered from shelling twice since the conflict began.

“We don’t have a cinema or a swimming pool in our town,” says Dasha. “We don’t even have a café where we can go and just sit and talk.”

With that in mind, it’s hardly surprising that when students at the school were given the choice between equipment for biology classes or getting a new playroom, they picked the latter.

“Of course the playroom won!” says Masha, a student at the school. She has made a Playdoh model of the playroom, which was provided with the support of UNICEF and the European Union. The space has a ball pit, bean bag armchairs, a projector and board games – and the children are already excited they will have somewhere new to hang out together.

Hrysha says he hopes to be able to deliver the speech he prepared once the shelling stops, and that he’s looking forward to having somewhere to chat with his friends and just relax.

“But things need to calm down in town [so we can get] the room opened.” 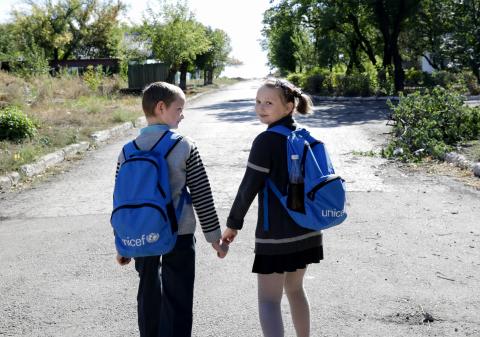 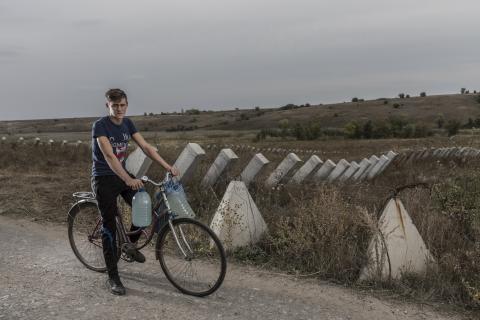 Where getting water means putting your life on the line

In eastern Ukraine, searching for water puts children and their families in the line of fire 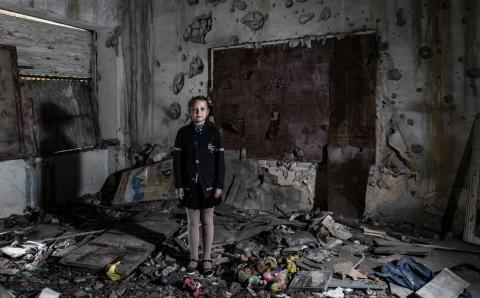 Children are coming under attack in conflicts across the world. We can’t accept this as a ‘new normal.’