Tamanu’s family was forced to leave their home and seek shelter with relatives.

On the night Cyclone Pam hit Vanuatu, Tamanu’s family was forced to leave their home and seek shelter with relatives. When they returned, their house was destroyed. One year later, Tamanu is thriving thanks in part to the Vanuatu Society for Disabled Persons (VSDP) Early Intervention playgroup, which travels to communities like hers to reach children who need development and support services.

PORT VILA, Vanuatu, 15 July 2016 – Five-year-old Tamanu is a vivacious, bubby girl. She happily leads us through the garden from the temporary house she shares with her mother, father and 9-month-old twin baby brothers, to the place where their house stood before it was torn down by Category 5 Cyclone Pam, a year ago. In the yard, a neat pile of sand and coral sits, ready to be used in construction of a more permanent home for Tamanu’s family.

Tamanu’s demeanour changes when she recalls the night of the Cyclone, saying “I was very frightened.” She tells us that her father and heavily-pregnant mother took her to seek shelter with relatives on the other side of town during the cyclone, but when they returned home they found that a big tree had smashed through their house. Tamanu looks at the old pots and frying pan perched precariously on the remains of their kitchen sink and says, “When you hear that there is a cyclone coming, go somewhere where you can be safe.”

A difficult place for children with disabilities

Vanuatu can be a difficult place for children with disabilities at the best of times, even more so after a disaster of the scale of Cyclone Pam. Too many miss the opportunity to participate in school and other childhood activities because they do not have access to appropriate support and learning opportunities. Tamanu was one of the fortunate few children with disabilities in Vanuatu who was attending the Vanuatu Society for Disabled Persons (VSDP) Early Intervention playgroup last year before Cyclone Pam hit the country.

The playgroup aims to support children with disabilities to learn, grow, play and develop at their own pace, with the support of their families and specialized teachers, including dedicated volunteers. The playgroup also offers opportunities for children to subsequently integrate into the mainstream schooling system.

Marinette, one of the VDSP playgroup teachers, explains that children who show promising signs of being able to move on from the Early Intervention class to a public kindergarten are referred by one of the teachers. This is exactly what happened for Tamanu. She and another nine children from the playgroup were referred to a community kindergarten close to her home, where she seems to be thriving.

Tamanu’s excitement is evident as she says, “I love school. I like singing, painting, telling the weather and playing with my friends.”

Support where it’s needed most

The VDSP centre was badly damaged by the cyclone; half of the building was destroyed and still hasn’t been rebuilt. But it takes more than a cyclone to stop this determined group. With support from UNICEF, the Early Intervention playgroup restarted and made the bold decision to begin reaching out to four cyclone-affected communities across Port Vila, taking badly-needed care, development and support services to children who would otherwise not be able to travel.

Marinette admits it hasn’t been an easy journey. To sustain the operations of the community-based Early Intervention playgroups, VSDP needed funds to support transportation of teachers, toys and other learning aids, as well as transporting children and their caregivers to and from the playgroup venues. With financial support from UNICEF and the provision of UNICEF Recreation and Early Childhood Development kits, VSDP was able to keep the programme running, reaching out to 40 children like Tamanu with various types of disabilities in cyclone-affected communities each week.

It may not be easy, but it’s clear that this is a vitally-needed service. A year after Cyclone Pam devastated the country, the VDSP is stronger than ever, reaching out to children like Tamanu, one child at a time, in order to give them another chance at learning and going to school with their peers. 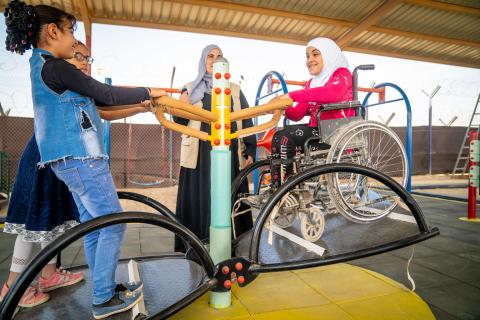