By Eliane Luthi and Cindy Cao

YOROSSO, Mali, 31 July 2017 – “Show me how you breastfeed your child,” says Aminata as she faces Batoma. A group of women look on, while sitting on a mat under the shade of a mango tree.

“That's good,” Aminata says with a reassuring voice. “You have a good position: belly-to-belly, your arm supporting the baby’s body and his buttocks in your hand.” She adds one final piece of advice: “Do not forget to smile at him, never forget to show him your love.”

This Tuesday morning, Aminata and Batoma are acting out a play in front of an audience of mothers who have come to a weekly meeting at the health centre in Yorosso village in southern Mali. Both are members of the local nutrition support group, whose role is to advise families on proper nutrition for their little ones.

Not everyone in the community knows that the first 1,000 days of life are when the most brain growth occurs. Many of the women also do not know that breastmilk is the best food for babies.

>> Learn more about the benefits of breastfeeding

Foundation for a healthy life

It’s also key to newborn survival. Children who are exclusively breastfed for the first six months of life are 14 times more likely to survive than non-breastfed children. Breastfeeding also improves a child’s quality of life by supporting cognitive development and health – ultimately helping advance a child’s prospects in life.

While breastfeeding might appear to be instinctive, that isn’t always the case. Despite the proven benefits, only 1 child out of 3 is exclusively breastfed in Mali. Many mothers give up breastfeeding exclusively – or stop completely – in the first few days or weeks after delivery.

That is why Aminata and Batoma, like other members of the nutrition support group, act as role models.

“This type of simple counselling has the potential to bring about a shift in which the practice becomes the social and cultural norm in Mali. A positive public opinion can provide strong support for breastfeeding mothers,” says Marc Nene, UNICEF Mali Nutrition Manager.

But if community buy-in is essential, political will is just as important.

“There used to be bad practices here,” says Bernard Coulibaly, the deputy prefect of Yorosso. “People used to throw out the first milk [colostrum] that women produce. We used to say it was bad milk.”

Today, the local government is fully supportive of breastfeeding and the health benefits it offers, especially during the first days of life. “We know that the first milk is like a vaccine,” says Mr. Coulibaly.

Aminata has also noticed a transformation in the culture of breastfeeding within the community. "I've seen incredible improvements here, both with children and with mothers," she says. Working hand in hand with other support group members, mothers, health workers, community relays, teachers and children, she contributed to making Yorosso a stunning success story.

In just two years, the district of Yorosso reduced its stunting rates by nearly half (28 per cent in 2014 to 15 per cent in 2016), evidence that with the right approach, malnutrition can be reduced dramatically in a very short period of time.

“Breastfeeding only requires simple knowledge and the good nutrition of the mother, who passes on the benefits of her health to her child,” says Mr. Nene. “The inheritance of health is a sustainable solution.” 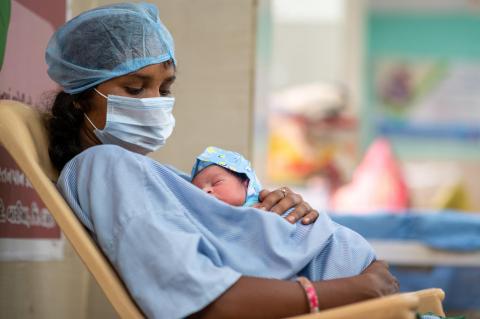 How to protect yourself and your baby