JUBA, SOUTH SUDAN - “If there is no water, there is no life – water is life.” Anglo Yugu Ladu Neua is sitting in a chair under the shade of an empty water kiosk known as #4 on the new Juba Pipeline. It has been over two weeks since a water truck has been able to make its way through the muddied roads to Khor Wolliang, a community in the capital city of Juba, surrounded by small gardens of thirsty groundnuts, okra, and pumpkins. “I’m waiting.” Anglo looks around and takes a long pause from speaking. The water truck sells 240 L of water for roughly $3.50, a high price in South Sudan, where over 60 per cent of the population is below the poverty line of $2 a day. “They say the water is coming, but the river is there.” He points down the hill. After awareness campaigns and needs mapping with UNICEF and Maltezer International, Anglo’s family agreed to offer their land for the community-owned kiosk.

The Juba Pipeline was set to be completed September 2020, but due to the COVID-19 pandemic, construction ground to a halt with the rest of the world. 26.65 km of pipeline, serving a population of 110,000, will carry water from the Nile River, first filtered to make it potable, then pumped up to a reservoir on Juba’s ‘Table Mountain,’ Jebel Kujur. That’s were gravity takes over, streaming the life-saving liquid into the tanks of seven kiosks around the city. Here at kiosk #4, the last 0.245 km of pipe will be buried underground once the crops have been harvested. That means clean water should be flowing through the taps this December.

Kiosk #4 is located between a stream polluted with laundry and sewage, and an unused borehole. Children get fungus on their skin when they sneak off and play in the stream and cooking with it causes a runny tummy. “The borehole has water that is so salty it can cause problems in your body, it’s not healthy,” says Anglo’s son, John Anglo Neua. In the dry season, it remains bare. “When we hear water coming from the taps, we will be happy! It will save us time and we will know the source of the water. Sometimes, water from the trucks is muddy,” injects Rose Peter. She also talks about how clean water will decrease the number of illnesses in the community.

We drive off to kiosk #5 across town. The land rover climbs and slides its way up Jebel Kujur to find village Deputy Chief, Alex Lemi Philip, seated under a small tree with some committee members. Directly across from them, construction workers in bright vests are clanking on metal pipes, building the water reservoir. “The noise does not bother us because that sound will bring us water,” Alex says as he offers a coronavirus-friendly elbow greeting. No water truck has been up this mountain since 2016 when a new round of violence started.

After the formalities and many sincere expressions of gratitude for the pipeline that will bring life-saving water to 400 households in his community, the Deputy Chief explains, “We have two boreholes: the closest one is broken-down and the second is across a stream.” Children get washed away trying to cross over and fill jerrycans. The water is dirty with washing and feces and runs empty in the dry season.

Analema Abdule, Head of the Women’s Group, elaborates on the dire situation of the community. “There are many challenges in this area. We are many widows here, struggling to raise our children. Women are sleeping on the ground without blankets or nets. Even if there was a water truck, we cannot pay. But, with this [pipeline] project it has opened our eyes to possibilities.” She adds, “When first hearing about it, it was a colorful and wonderful sound. We struggled to imagine what it would look like. From the elders to the children, to see this - they are appreciative,” says Analema, pointing at the aqua blue kiosk with faucets lined down each side.

Fresh water being pumped steps away from communities is a step closer to healthier and thriving families. Today, 60 per cent of the total population do not have access to safe water; and, dirty water is one of the main causes of child morbidity in South Sudan. As fetching water is seen as a task for women and children, it will also free up time for women to pursue income activities and for children to go to school. There is hope on the horizon. Anglo can still be spotted, sitting at kiosk #4, “They say it will come to me here, where I’m sitting. I’m waiting for the water for me, for my children, for my community.” 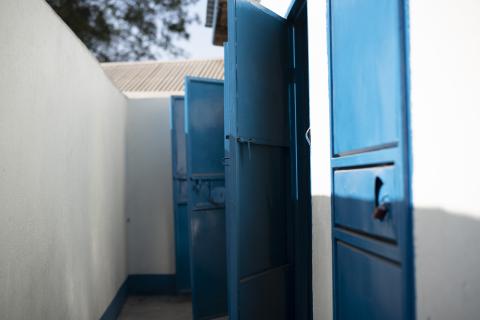 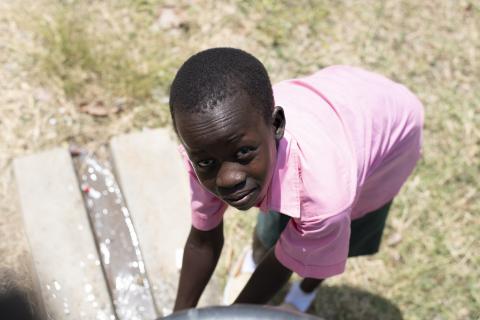 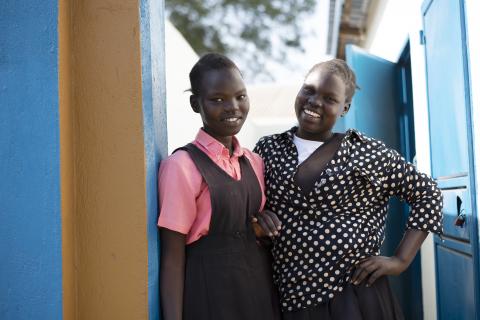 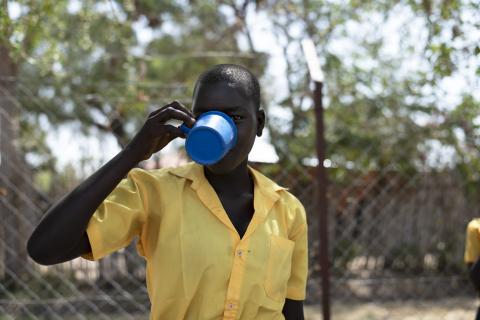