Pulling children out of hunger, disease and death in war-torn South Sudan

The ready-to-use therapeutic food to treat malnutrition is rescuing the most vulnerable children, especially in several internally displaced families

WAU, South Sudan – Frightful murmurs spread in early 2016 that the escalating violence across South Sudan might soon reach their neighbourhood in Besselia, Western Bahr El Ghazal. Before they could grasp the intensity of the conflict, armed groups and cattle keepers were moving in, occupying farm communities and destroying their crop. Thousands fled for their lives. Twenty-five-year-old Mary Paul was one of them.

She walked for nearly four months with her 60-year-old mother and four children, trying to find a place to settle. “I was looking for any place where I could feed my children at least one meal a day,” she recounts. “Through the journey, we ate whatever wild food we found like cassava leaves and we slept on the streets.” When she finally reached the neighbouring Mboro county and began setting up a temporary shelter, fighting erupted there too and once again it was time to escape. After several months, starved and exhausted, she reached the UN Protection of Civilians (PoC) site in Wau.

As she made a home at the PoC, it was clear the months of arduous travel had taken a terrible toll on Mary’s children. “They lost weight, struggled to eat and had frequent bouts of diarrhea, vomiting and fever. My mother tried to treat them with juices from the herbs she found on our way, but their condition only became worse,” says Mary.

UNICEF and partners conduct regular screenings of all children under five at the PoC and it was soon discovered that three of Mary’s four children were malnourished. 4-year-old Christina John, 3-year-old Lidia and 17-month-old Nayah had rarely eaten a meal a day and were suffering from severe acute malnourishment.

With Lidia at her side, Mary is listening intently to the healthcare worker who is explaining the importance of a healthy start for children to several mothers at the PoC. But, Lidia’s attention is focused on the sachet in her hand. Sitting silently in a dark blue frock, she squeezes out the last few remnants of the paste and gulps it down eagerly. This ‘plumpy nut’ paste, a ready-to-use therapeutic food (RUTF) for treating acute malnourishment, is saving the lives of thousands of South Sudanese children.

Only two months ago, Lidia’s mid-upper arm circumference was 10.8 cms and she weighed less than 10 kilograms (the ideal measurements for a child of her age are 12.5 cm and 14 kilograms respectively). UNICEF and partners instantly enrolled her into the Outpatient Therapeutic Programme (OTP) at the PoC. However, she didn’t respond adequately to treatment and was quickly diagnosed as suffering from malaria.

Since, she has received treatment for both malaria and malnutrition. The staff at the OTP are, today, proud and relieved that she has been cured of malaria and that her condition is steadily improving. She has already gained nearly two kilograms, thanks to the RUTF, they say.

“She used to cough and shiver incessantly. That has stopped entirely now. I know she will be fine soon,” says Mary confidently. “My two other children were in a very bad shape when I arrived here. But now both are healthy and rarely fall ill.” Christina and Nayah have gained over three kgs on following the carefully doctored OTP for two months.

The only famine anywhere in the world in the last six years was declared last year in South Sudan. Coupled with the worst cholera outbreak in the country’s history, it has left an estimated 1.1 million children under the age of five acutely malnourished. UNICEF has so far enrolled 206,993 children between 6-59 months with severe acute malnutrition in therapeutic care. 736 such outpatient therapeutic programmes are currently operational. Over 86.7 per cent of children admitted to therapeutic care across the country are discharged as cured.

The OTP staff have a rigorous schedule that ensures all children are screened, any complications diagnosed and their condition treated. They also conduct thorough follow-ups to ensure that children do not slip back into illness. Several preventive measures, such as provision of mosquito nets, soap etc.. to mothers, are also in place so that children don’t fall prey to the vicious cycle of malnutrition and infection.

“I haven’t seen my husband for one year. This programme, which has been supporting my children and taking care of their life for months, is now my husband and my mother,” says Mary.

(Grants for the prevention and treatment of malnutrition are generously provided by the German National Committee for UNICEF, New Zealand, UKAID, USAID and the US Fund for UNICEF.) 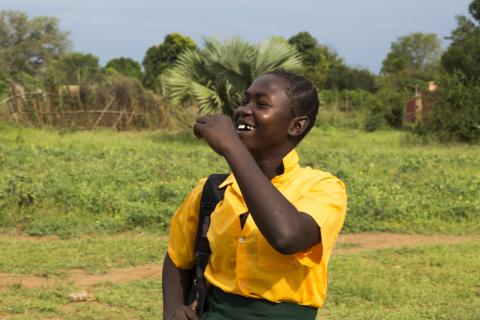 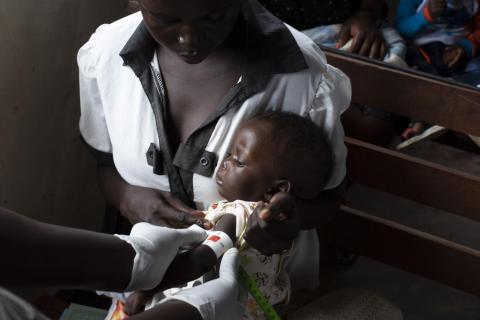 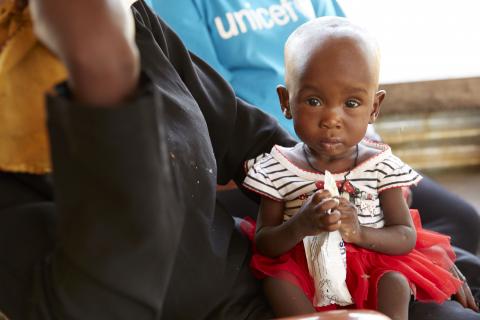