Exclusive breastfeeding of children until 6 months is one of the simplest, safest and healthiest means of feeding a baby and can help prevent malnutrition among children

Juba, South Sudan – As we celebrate World Breastfeeding Week from 1-7 August, the Ministry of Health and UNICEF are working with the coalition of nutrition partners to educate and support all mothers to adopt and increase the practice of exclusive breastfeeding of infants up to six months of age.

The theme for this year’s celebration, “Step up for breastfeeding, educate and support,” is a rallying call to increase awareness of mothers around the world that breastmilk provides the optimal nutrients for the first 6 months of a child’s life and to support them to overcome barriers to exclusive breastfeeding.

“It is proven that breastmilk is the only food that babies need for the first six months of their life and it keeps them healthy and protected. The Ministry of Health will work with all partners to increase knowledge among all mothers in South Sudan to ensure that all babies are exclusively breastfed for the first six months of their lives,” said H.E Yolanda Awel Juach, the Minister of Health.

Breastfeeding for the first six months is particularly crucial right now as South Sudan is currently going through a nutrition crisis and malnutrition rates have continued to worsen. More than 300,000 are expected to suffer from severe acute malnutrition in 2022 which is the highest since 2013.

The 2022 IPC food security analysis revealed that six out of ten people in South Sudan are facing food insecurity with multiple negative consequences. The good news is that for infants, for the first six months of life, their food security is guaranteed as breastmilk, the only food they need is available in the right quantity, at the right time and free of charge, provided the mother adopts and implements exclusive breastfeeding.

As a major shift in its strategy to move away from treatment alone to prevention, nutrition partners in South Sudan are promoting exclusive breastfeeding of infants for six months as a good practice which protects infants and provides them their first “immunization” against common childhood illnesses.

Exclusive breastfeeding up to six months and complementary feeding after six months along with continued breastfeeding until a child turns two years old and beyond, helps build a child’s immunity, and protects them against common childhood illnesses and prevents malnutrition.

“UNICEF works with its partners at the community level to create awareness among all mothers in South Sudan about identifying and preventing malnutrition among their children. Exclusive breastfeeding is one of the key pillars of our integrated programme to prevent malnutrition among children,” said Hamida Lasseko, UNICEF Representative.

In South Sudan, UNICEF works closely with the Ministry of Health and many other partners to support 1,145 nutrition centres which provide therapeutic foods and lifesaving medicines to treat common childhood illnesses and other medical supplies. UNICEF also supports 88 Nutrition Stabilization Centres which are in-patient facilities designed to treat severely wasted children, those with medical complications, provide medical care and provision of therapeutic food.

UNICEF South Sudan also supports 4,500 mother-to-mother support groups and each group comprises one “lead mother” and about 15 members. In 2021, about one third of these lead mothers were selected as community nutrition volunteers (CNVs) in their communities, as they support mothers of young children on infant and young child feeding (IYCF). These community volunteers are on the frontlines of the coalition to prevent and treat malnutrition among children under-5 in South Sudan. 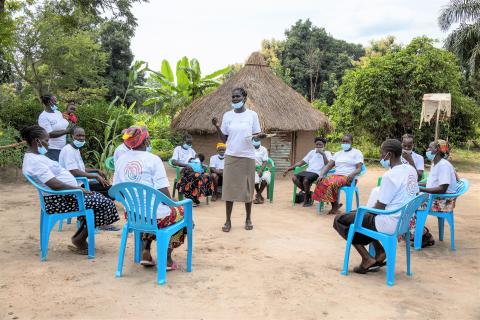 UNICEF works with partners, communities, parents to promote the nutritional and life saving benefits of exclusive breastfeeding for children up to 6 months 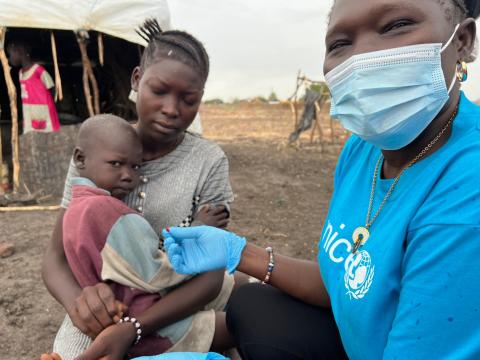 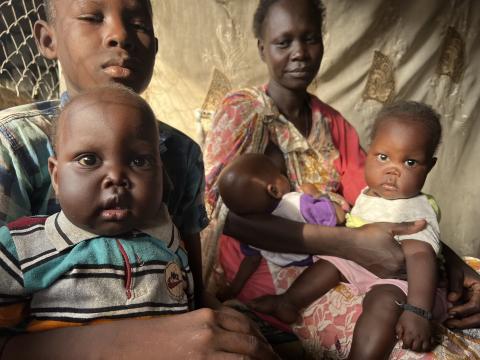