Somalia is facing famine conditions as a perfect storm of poor rain, skyrocketing food prices and huge funding shortfalls leaves almost 40 per cent of Somalis on the brink. 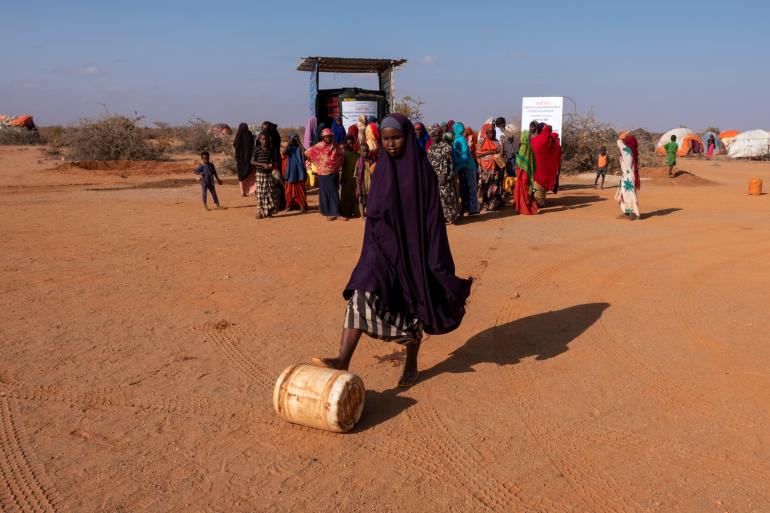 UNICEFSomalia/Rich
A young girl collects water from a pump in a make shift IDP camp in Dollow, Somalia.

Mogadishu, 12th April, 2022: Millions of Somalis are at risk of sliding into famine as the impact of a prolonged drought continues to destroy lives and livelihoods, and growing needs outpace available resources for humanitarian assistance, United Nations agencies warned today.

The United Nations Food and Agriculture Organization (FAO), the Office for the Coordination of Humanitarian Affairs (OCHA), the United Nations Children’s Fund (UNICEF), and the United Nations World Food Programme (WFP) are calling for an immediate injection of funds to enable a scale up of life-saving assistance in Somalia. This follows the release of a new Integrated Food Security Phase Classification (IPC) report that found six million Somalis, or almost 40 per cent of the population, are now facing extreme levels of food insecurity, with pockets of famine conditions likely in six areas of the country.

This is nearly a two-fold increase in the number of people facing extreme levels of acute food insecurity due to the drought and related shocks since the beginning of the year. It reflects a rapid deterioration of the humanitarian situation, as millions of Somalis have exhausted their ability to cope with the crisis and funding shortfalls mean humanitarians will be unable to meet the needs of the growing number of people facing emergency.

“The projection for the risk of famine in six locations is extremely worrisome and should serve as a very serious warning if we really meant ‘never again’ after 2011. The reality is that time is not on our side and many more lives and livelihoods are bound to be lost in case of further funding delays,” said Adam Abdelmoula, Deputy Special Representative of the Secretary-General, Resident and Humanitarian Coordinator. “I therefore continue to call on the authorities and our development partners to act decisively and help scale up resources to match the rapidly increasing needs, save more lives and rescue more livelihoods for the people of Somalia, “added Mr. Abdelmoula.

Collectively, humanitarian agencies have reached almost two million people with humanitarian assistance as of February 2022, but a critical gap in donor funding means they cannot sustain and scale up their support to meet the growing needs. If this gap is not urgently addressed, it will contribute to worse outcomes with a real risk of widespread famine. The last time such a humanitarian tragedy struck Somalia was in 2011, when famine conditions killed a quarter of a million people.

“The funding we need to respond to a crisis of this magnitude has simply not come. We are all watching this tragedy unfold and our hands are tied,” said Etienne Peterschmitt, the FAO Representative in Somalia. “I want to stress that it is not too late. Funding received today can still prevent the worst, but it has to come at scale and it has to come very soon,” he said.

Children under five are among the most vulnerable as the drought worsens, and access to food and milk is very scarce due to rising commodity prices and livestock losses. Around 1.4 million children face acute malnutrition through the end of this year, with around a quarter of them, or 330,000 children, facing severe acute malnutrition.

"The lives of children are at risk. If the funding gap is not met, malnutrition rates will continue to soar, and children may face severe malnutrition and preventable diseases. Losing children to starvation would be a loss for humanity,” said Angela Kearney, UNICEF Somalia Representative. “Addressing drought related indicators now will also greatly increase a child’s future opportunities.”

Gaps In The Funding Pipeline

The response to the drought is severely underfunded, leaving many Somalis without assistance. The 2022 Humanitarian Response Plan that seeks US$1.5 billion is only 4.4 per cent funded, as Somalia competes with other global emergencies for funding.

As the hunger and nutrition crisis rapidly worsens, the gap between food insecurity and available resources is widening. The inability of UN Agencies, Funds and Programmes to meet rising needs means prioritizing humanitarian needs and making the difficult decision of who gets help and who doesn’t.

“We are literally about to start taking food from the hungry to feed the starving,” said WFP Somalia Representative and Country Director El-Khidir Daloum. “Being forced to prioritize our limited resources couldn’t come at a worse time as we’re on the cusp of a humanitarian catastrophe in Somalia. This is a year of unprecedented humanitarian needs and hunger but I implore the world not to turn its back on Somalia or wait until it’s too late. Millions of lives are at stake.”

A Perfect Storm For Famine

According to a recent analysis conducted by FAO’s Food Security Nutrition Analysis Unit (FSNAU) and its technical partners, three factors will contribute to famine taking hold in the country in the next three months– failure of the April to June 2022 rainy season, absence of adequate humanitarian assistance and a continued trend of rising food prices. With the below average rainfall outlook, inadequate funding, and globally disrupted supply chains and spikes in commodity prices due to the conflict in Ukraine, Somalia is facing a perfect storm that could very quickly lead to famine.

For famine to be declared in an area, at least 20 per cent of the population need to be experiencing Catastrophe (IPC Phase 5) conditions. FSNAU and partners have identified potential famine hotspots across six different regions where 5-10 per cent of the population or about 81,000 people are already facing famine conditions.  In this scenario, affected areas face extreme food shortages, high malnutrition and excess mortality as a result of starvation.

FAO, OCHA, UNICEF and WFP are gravely concerned about the worsening drought and the possibility of famine in the coming three months. With current funding shortfalls, bleak rainfall forecasts, and rising food prices globally, the agencies are calling for immediate funding to scale up humanitarian assistance across the hardest hit parts of the country. 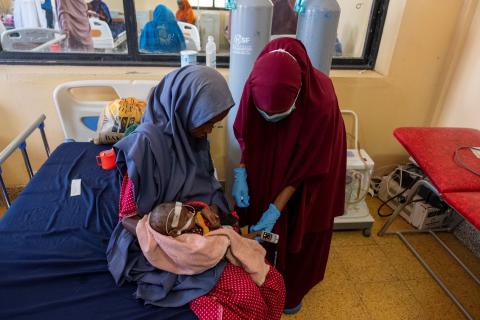 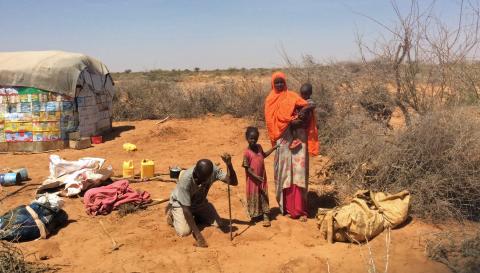 Drought forces families to flee their homes in Somaliland

Desperate families are migrating in droves in search of food, water, and pasture for their weakened animals. 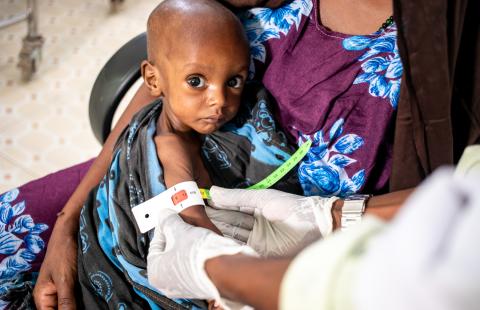 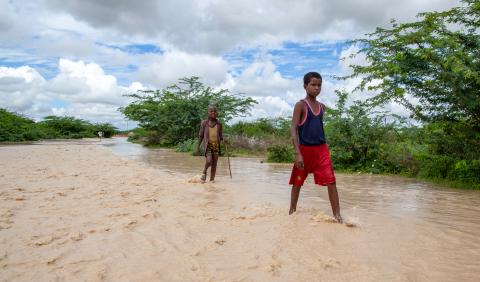