A fairy tale for a happier childhood

Mariam, a twelve-year-old girl from Afghanistan, is walking excitedly behind the stage of the Kikinda theatre.

Kikinda, Serbia - Mariam, a twelve-year-old girl from Afghanistan, is walking excitedly behind the stage of the Kikinda theatre. She is quietly going over her lines.

The play, Snow White and the Seven Dwarfs, is about to begin in 20 minutes and her role is an important one. She doesn’t want to make a mistake, because this is her special moment. She will be, at least for a little while, a princess.

“I am Snow White in the play. I really like acting, and when I grow up I will be an actor,” Mariam says confidently.

Another 26 children from Afghanistan, Iran, and Tajikistan are busily running around her. They are fixing their costumes, putting on makeup, and taking their places.

What they have in common is growing up together in the Reception Centre in Kikinda, but they also want to do their best today.

These children have never had the opportunity to pun on masks, come out on stage and act. Many of them have grown up as refugees, in camps, far away from their homes.

“I am from Afghanistan, but I have lived in Iran. I was born a refugee. In Iran, we didn't get a chance to act”, says Mariam.

I am from Afghanistan, but I have lived in Iran. I was born a refugee. In Iran, we didn't get a chance to act.

Right on cue, the curtain goes up and the fairy tale begins – both for the small actors and the audience. The actors don’t have stage fright. They act and dance with confidence, no mistakes are made, as if they were born to be on Broadway.

The youngest children, the three-year-olds, push each other around and laugh - both when they should and when they shouldn’t. They come out on stage when it isn’t their turn.

The play is in Farsi, and the audience has the Serbian translation projected onto a big screen in the corner of the stage.

Twelve-year-old Muhammad from Afghanistan admits that he’s not an artistic soul, and what he really wants is to become a footballer. And yet he took his role in the play very seriously. On stage, he is a real prince.

“I didn't find it hard. It's fun being an actor. I like going outside the centre, going to school, doing and seeing something new,” Muhammad explains.

Although they have already performed the play twice in the Reception Centre in Kikinda, this performance in the theatre is their favourite. That’s because this time more than a hundred children from primary schools in Kikinda are in the audience.

You can hear laughter, excitement, and applause every 5 minutes, everyone is shouting “bravo”! And deservedly so. The children from the Reception Centre spent a month rehearsing, designing and making the costumes for the play.

UNICEF Serbia/2018
When he grows up, Muhammad wants to play football for the world's greatest clubs. Acting is his hobby.

It's fun being an actor. I like going outside the centre, going to school, doing and seeing something new.

The play “Snow White and the Seven Dwarfs” is the result of a creative workshop, supported by the Youth Office in Kikinda, the Centre for Youth Work, the National Theatre and UNICEF, which is supporting the work of the SOS Children's Villages in the Reception Centre in Kikinda.

How much this play means to the actors and their families is evidenced by the words of a mother of three children – “Thank you for taking them outside the centre at least for a day and making them feel like all other children”. 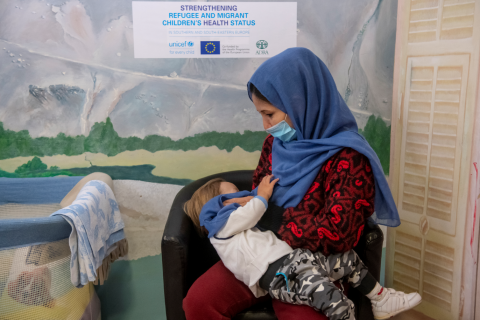 A Mother and baby corner - a place of health and serenity

The Community centre is run by the humanitarian organization ADRA, with a mother and baby corner, whose work is supported by UNICEF. 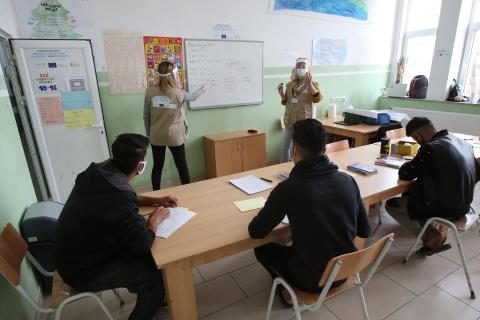 Safely and securely towards a new life 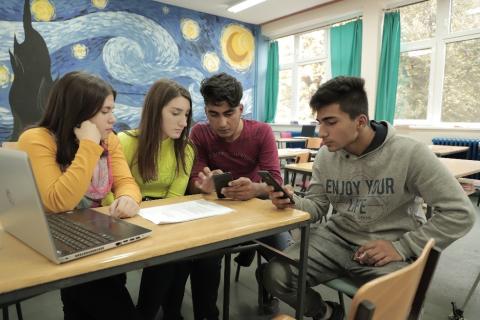 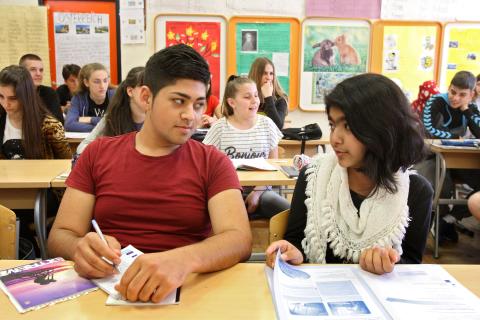