A healthy life starts with breastfeeding 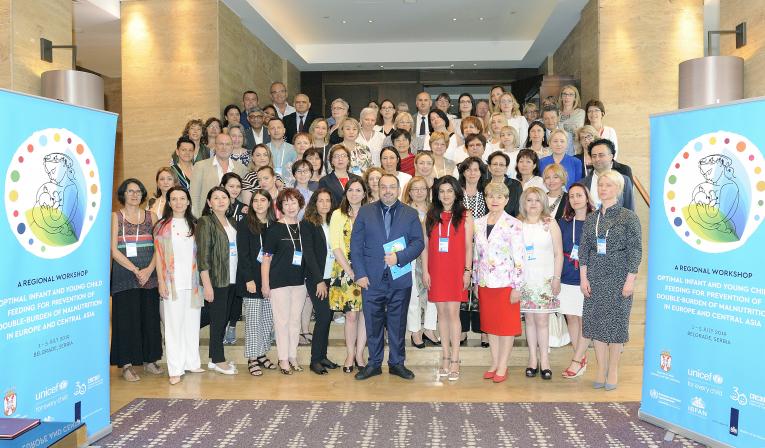 Belgrade, Serbia, 17 July 2019 - Progress in the nutritional status of children in Europe and Central Asia has been promising.

Still in some parts of the region, more than 20% of children are stunted and there is an unfolding crisis of childhood obesity and the burden of non-communicable diseases related to the over-consumption of foods high in fat, sugar and salt.

Almost 1.3 million of babies are deprived of exclusive breastfeeding – the best source of nutrition for new-borns – every year.

In fact, this region has one of the highest and rapidly growing rates of consumption of breast-milk substitutes per infant.

It's imperative that these dramatic trends change by 2030, in the Decade of Action on Infant and Young Child Feeding for prevention of Double Burden of Malnutrition - an initiative of UNICEF ECARO. However, ways to reach this goal will differ for every country in region.

That is why representatives from 17 countries; from ministries of health, executive and legislative authorities and non-governmental organizations participated in the “Optimal infant and young child feeding for prevention of double-burden of malnutrition in Europe and Central Asia” regional workshop in Belgrade, Serbia, organized by UNICEF, the World Health Organization and the Ministry of Health of the Republic of Serbia.

Participants came to Serbia to exchange experiences and good practice examples and legislative solutions that they can implement in their home countries.

Participants also spent time in the field to see what Serbia is doing to promote Infant and Young Child Feeding. One of the visits was to a Primary Health Centre in Belgrade, to see how Parenting classes make a difference.

They met Jelena Djordjevic, who is pregnant with her first child. Her biggest fear is that she won’t be able to breastfeed her baby. During classes, Jelena befriended Mensura Ferati, who is soon to become a mother for the third time. Mensura successfully breastfed her first two children until they were 2-years old. She is planning to do the same with her third child.

“My first encounter with breastfeeding at the maternity ward was painful. But then, during a home visit, the visiting nurse showed me how to hold my baby and how to expel excess milk. After that, breastfeeding was enjoyable both for me and for the baby”, said Mensura.

“The most useful thing for me was to see how other moms do it. I’ve learned two things from Mensura - that the most important thing for a mother is to be persistent and relaxed,” explained Jelena Djordjevic.

Baby-friendly hospitals are the first step in securing exclusive breastfeeding in the first six months, but will also help to facilitate the implementation of the Ten Steps to successful breastfeeding.

“That is a revised programme which is more than three decades old. It is divided into two groups, one is about legislation, regulations in line with the International Code of Marketing of Breast-milk Substitutes. The other is about maternity wards that are prepared to explain to the mother how to successfully initiate breastfeeding. The best way is for the health workers to be trained to form the mother’s decision to breastfeed and the way she does it even during the pregnancy”, explained Dr France Begin, Senior Advisor, Early Childhood Nutrition from UNICEF HQ. She believes that the crucial thing for the continuation of breastfeeding is to have support in the months after childbirth.

“We are trying to encourage moms to avoid formulas as early as their babies’ birth. The rule of thumb is not to separate the baby from the mother after childbirth, but to have skin-to-skin contact in the first hour in Baby-friendly hospitals”, explained Dr Ljiljana Stankovic, Serbia’s National Breastfeeding Coordinator.

“As mothers and their babies get discharged from maternities, home visiting programmes, which are present in several countries in the region, offer great support to mothers to continue breastfeeding during the first critical days after birth, when breastfeeding problems start”, explained Dr Laurence Grummer-Strawn.

The workshop participants discussed ways to improve the nutrition of children at the earliest age, as well as the obstacles to achieving that.

The aggressive promotion of breast-milk substitutes is a global problem.

Legislative solutions in many countries can be very powerful, but few countries enforce them. Companies continue with pushing formula milks in health care facilities, on mothers, because the laws are not rigorously enforced. That is why the participants of the workshop agreed that there is a need for better monitoring ­– committees that will create better systems for identifying and sanctioning those violations.

Serbia, for example, has committed to the better implementation of the International Code of Marketing of Breast-milk Substitutes, primarily through the Rulebook on Infant and Young Child Feeding.

“The Rulebook should incorporate all provisions from the Code related to infant formulas and complementary feeding and recognize all stakeholders in the production and distribution of infant formulas,” said Ferenc Vicko, the State Secretary in the Ministry of Health of the Republic of Serbia.

Serbia has undertaken to increase the rate of exclusive breastfeeding for children under six months from 13 to 20 percent by 2021, and the rate of predominant breastfeeding of children of the same age from 47 to 60 percent. Child-Friendly hospitals would help with that.

As the child grows, the success of prevention of child undernutrition and obesity relies on is the introduction of complementary feeding.

The inappropriate promotion of foods for infants and young children, including those which are lacking the necessary nutrients or are high in sugar, salt and unhealthy fat threatens appropriate feeding practices and can result in rapidly growing child obesity in the region. This is especially true for the marketing of Breast-Milk substitutes.

“After the age of six months, complementary feeding must be started for babies and that is, after 6 months of exclusive breastfeeding, the second important step that ensures the child is getting nutritious, well diversified foods, and not commercial complementary foods with high content of sugar, salt and fat. We are facing a fat truth in our region and that is the rapidly increasing rates of obesity among children under five. In the last 17 years, obesity has increased by 100 percent among the youngest children, and this is a signal for decision-makers that obesity is becoming a huge risk factor in Europe and Central Asia,” said Amirhossein Yarparvar, UNICEF Regional Specialist for Health and Nutrition.

Given the concerning situation of Infant and Young Child Feeding, and especially breastfeeding, in the region, and the massive wave of child obesity, it is critical to improve the feeding of children during their early years.

To achieve this, the participating countries called for the acceleration of commitments by all countries in four main areas, which they undertook to fulfil by 2025: 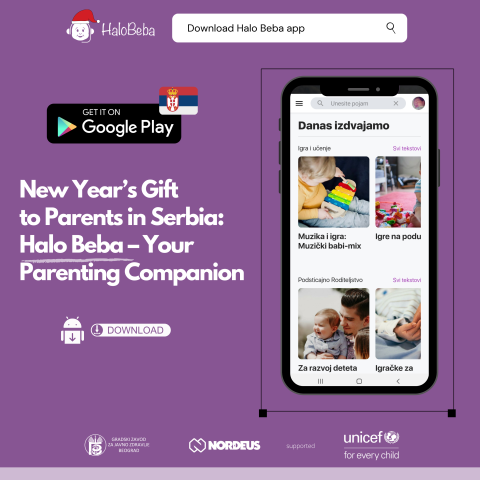 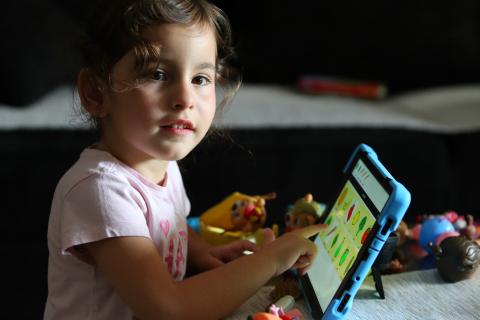 Srna is one of the children who have received the Communicator thanks to UNICEF’s For every child, a voice project.

Every Day is Father's Day 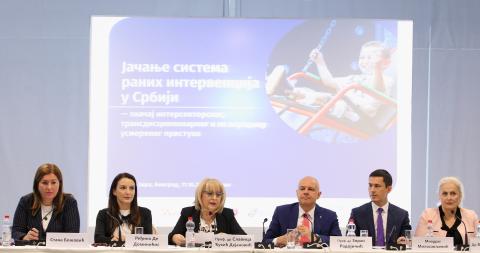 The best start for every child - support from the earliest years