Asia is the birthplace and confluence of the world’s major religions including Hinduism, Buddhism, Islam and Christianity.

Throughout history, religious leaders have deep-seated and trusted relationships with their followers and communities. They are in a unique position to address inequity related to societal factors – such as social norms, behaviors and practices - that impact the lives and wellbeing of women and children and to speak out on behalf of the most disadvantaged, marginalized and vulnerable.

Religious leaders shape social values and promote responsible behaviors that respect the dignity and value of all life. Because of their expansive networks of religious communities and access to families and communities, religious leaders are an important conduit of communication for social change and transformation. In conflict, the moral influence and trust of religious leaders allow them to play significant roles in mediation and reconciliation, as well as to advocate for the special protection of children and other particularly vulnerable members of their communities.  Religious leaders provide spiritual support and stability, which can help meet people’s psychosocial needs in the face of adversity. Religious leaders organize and facilitate religious events and festivals with their followers and community members that can be used for promoting key lifesaving behaviors for the wellbeing of children and women.

UNICEF and its partners share many of the values of religious leaders and their communities. The Convention on the Rights of the Child reflects deeply-held values embedded within religious traditions that uphold the dignity of every child and the centrality of the family in building strong communities. By partnering with religious leaders in South Asia, the care and protection of children and the safeguarding of their rights can be amplified from the smallest village to the largest city, from districts and provinces to national and international levels.

In September 2017, UNICEF South Asia hosted a two-day inter-faith meeting with more than 30 religious leaders from seven countries to launch a South Asia Religious Leaders Platform for children in partnership with country offices in the region. The aim was to expand this network around the six regional Headline Results for children, build on the importance of shaping common social values, foster communication for community change and positive transformation, and to catalyze advocacy and behavior and social change communication for children within South Asia.

With its Secretariat in India, the Global Interfaith WASH Alliance (GIWA) was launched in collaboration with UNICEF in September 2013 as the world’s first initiative in engaging the planet’s many faiths - as well as partners across multiple social sectors - as allies to create a world where everyone, everywhere has access to improved Water, Sanitation and Hygiene (WASH). GIWA has inspired the emergence of state-level interfaith alliances working on child rights issues.

UNICEF provided technical assistance in developing GIWA’s strategic framework and roadmap and supports in planning and implementation of interventions to achieve its goals. The objective of the partnership is to strengthen and complement all stakeholder efforts for the elimination of open defecation in India, Swachh Bharat being a key priority of the Government of India and UNICEF.

The Islamic Foundation, an institution under the Ministry of Religious Affairs, has a countrywide network of offices at the divisional and district level, and seven Imam training academies. It contributes to the achievement of the SDGs through capacity building of Imams, mosque-based primary education, livelihood support through the zakat fund, campaigns against violence, healthcare services and religious education for adolescents and adults.

The Islamic Foundation and the Divisional Commissioner and UNICEF Barisal Field Office partnered to advance child rights and tackle WASH issues. Religious leaders have been trained on child rights, WASH and IPC issues, mobilized communities and disseminated key messages to their community members.

Through a MoU signed in June 2017, Islamic Foundation leaders are systematically partnering with UNICEF to carry out curriculum review and development, institutional capacity strengthening, community engagement and message dissemination, as well as joint research and publications and other initiatives.

The National Inter-Religious Network (NIRN) brings together leaders from all major religious groups (Baha’i, Buddhism, Christianity, Hinduism, Jainism and Islam) in Nepal to change social norms on child marriage and gender-based violence. In partnership with UNICEF, the NIRN developed an interfaith training manual to stop child marriage. Religious leaders stood together to publicly affirm their opposition to child marriage with a common message:

"Every religion believes that marriage should only take place when the boys and girls are capable enough to shoulders the responsibilities of raising a family”. This was agreed to be at the legal age of 18 at the minimum. 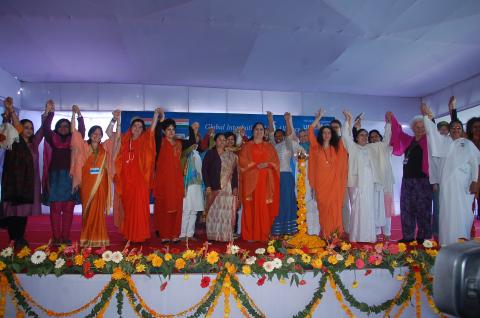 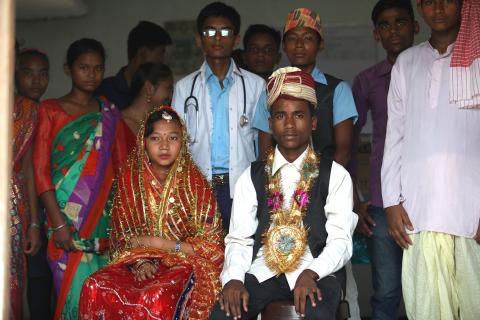 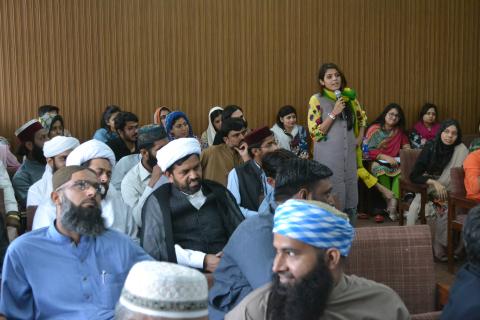