The yellow taxi drives slowly on an unpaved road in one of Kandahar city’s districts. It has rained heavily turning the detritus on the ground into a muddy quagmire. The car labours in its efforts not to get stuck.

Stopping near a house, a young woman in a black scarf and traditional dress climbs out of the car. She holds a big registry book containing detailed information on each house in the neighbourhood: which family lives where, how many children they have and, most importantly, if they are refusing to let their children have the polio vaccination. This woman is Hira, 28, a UNICEF consultant for the polio programme. Today she is visiting parents who are refusing to let their children be vaccinated to explain why the two drops of oral polio vaccine (OPV) are critical for their health and wellbeing.

We enter one of the houses and meet an elderly woman.

“I am not vaccinating my grandchildren!” The woman sounds resolute, but we stay anyway.

“Can we talk about something else?” Hira asks calmly.  Shortly thereafter, we’re drinking tea and praising the mild weather. The grandmother tells us her left leg was almost fully paralyzed half a year ago and she can’t walk normally.

“This is horrible. You should go to the clinic. I can recommend a good doctor for you. And do you also know that children who are not immunized can also be paralysed because of polio?” Hira starts getting to the point of our visit. “You have two wonderful granddaughters and it’s easy to protect them, especially now when the disease is spreading in the south region.”

The grandmother doesn’t seem convinced but asks questions about the rumors around the vaccine. Hira explains that OPV is safe, halal for Muslims, and it is the only way to protect children from getting polio. One hour later, the grandmother nods – she finally agreed to vaccinate. It is hard to say what was the turning point that convinced her. Maybe the photos of paralyzed polio survivors that Hira showed her on her phone; maybe information that polio vaccination is required for Hajj and Umrah (religious pilgrimages to Mecca which must be done at least once in lifetime by all Muslims); or simply the fact that Hira vaccinated her own two children and they are safe and well. The fact that the grandmother finally agreed to vaccination feels like a big victory – but it’s just a small step in the battle against polio.

Hira has been working in the health sector for almost 10 years – as a midwife, female mobiliser vaccinator, nutrition officer and a clinical mentor. Hira first started to support the polio programme as a Provincial Communication Officer (PCO), supervising 105 communication cluster supervisors. It was a high position and Hira recalls how uneasy at first it was for her.

“Our society is not always ready to accept females in leadership positions. My husband is an educated man, a doctor, and he is always supportive of my work. Unfortunately, not all families are like this,” says Hira. “When I started to work as a PCO, I was the only woman in many regional polio-related meetings. At first, all men there were extremely surprised to see me there, but now they are used to it. I believe the situation can change in the future, but unfortunately it is not always easy.”

During the national immunization campaigns, even during COVID-19 pandemic, Hira supports the teams by conducting information sessions for the refusal families and arranging open discussion sessions for the community groups.  She also holds awareness raising sessions on how to prevent the spread of COVID-19.

“After my first day working with refusal families, I wanted to leave the job. I didn’t convince anyone. But then I managed to convince one family with five children, who have never been vaccinated and it felt like such a victory that I decided to stay,” remembers Hira. “Now I know how to approach different people; I understand what type of information is important to persuade them to make the right decision. I also work a lot with community groups. For instance, we arrange open discussions and information sessions for health shuras and women’s groups. This is very effective as people have a chance to ask all the questions they are worried about.”

During the October 2020 immunization campaign, Hira with the District Communication Officer went to a madrasa, which had been refusing polio vaccinations for over a year. After a 2-hour discussion with mullahs, 50 children in the madrasa were vaccinated. Moreover, the mullahs promised to continue to vaccinate the children during subsequent campaigns and explain to parents in the community how important it is.

During the national immunization campaigns, and amid COVID-19 pandemic, Hira supports the teams by conducting information sessions for the refusal families and arranging open discussion sessions for the community groups.  She also holds awareness raising sessions on how to prevent the spread of COVID-19.

“My daughter is 5 years old, and all the work I do with communities I do for her.  She wants to study, and I hope one day she can become the Minister of Public Health. I hope by the time she grows up we will have eradicated polio and make sure women can have a chance for a good future in Afghanistan.” 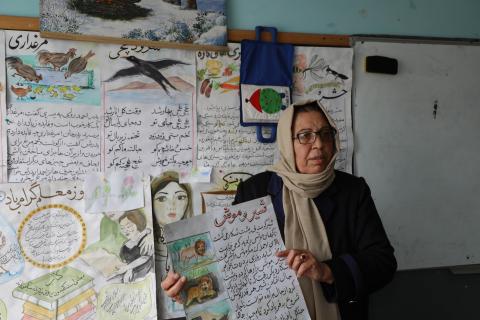 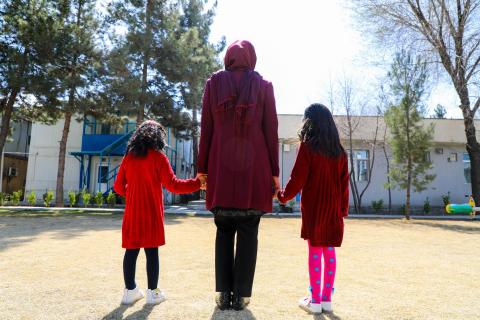 How Nazeera took learning into her own hands