Feeling alone in a new country, Nastia started to volunteer at the CATTIA Blue Dot in Brasov, Romania, to find new friends and work for a good cause. Now, it became an integral part of her life.

“When I see Anastasia out there, I know I can be sure everything is under control,” says Andrea, coordinator of the CATTIA Blue Dot Centre for Ukrainian refugees in Brasov, Romania, while she dynamically walks through the bright hallways of the two-storey building that hosts the hub. Nastia follows behind. Her voice resounds just above those of the many Ukrainian children playing in the main hall.

Nastia, short for Anastasia, is from Mykolaiv, Ukraine. She moved to Romania with her mother, brother, and her grandparents on the 6th of March, two weeks after the war escalated in her home country. “The most difficult part of leaving was knowing that I may not see my family for a long time,” she says. “I really miss my father, my cousins and everybody else. We used to see each other very often and the war simply destroyed that. It’s very difficult, but I think all Ukrainians are in the same situation right now.”

When Anastasia thinks about home, she recalls the trips to the seaside that she and her family took to see her grandparents. “I loved those visits; it’s very beautiful down there.”

“When the war started, we decided to leave Mykolaiv and move to a village nearby to be safer,” continues Nastia. “It was dangerous, and I was very scared.” “I remember jumping at every loud noise. We didn’t have sirens there, but we could hear the sounds of bombs exploding in a village nearby.” The family spent much of their time in an underground room they used as bomb shelter.” A cold and dark winter became colder and darker by the need to shelter from possible attacks.

“Worried for our safety, my dad decided that my mother, my brother, and I had to leave the county,” she concludes.

Helping and being helped

Once in Romania, the family was uncertain about their near future, but the generosity of Romanian people gave them hope. “The people we have met since we arrived have been really kind. Even without speaking the same language, they still tried to help,” remembers Nastia.

“Finding a house was particularly difficult. When we arrived in Brasov, we found a place we could rent, but that was expensive, and my mom wasn’t working. Then we met a woman who had an extra apartment in her building. She and my mom became friends: they often spend time together chatting.” “My mom and I are learning Romanian now.”

But Nastia felt lonely in her new country. So, she decided to go to the CATTIA centre. “I met a group of young people here and they suggested I start to volunteer.” Initially a way to spend her free time, volunteering has become an integral part of Nastia’s life, a way to feel more at home in her new country.

Since then, Anastasia came to the centre almost every day, despite the 2 busses she has to take to reach it. “Here, I usually work at the café, help sorting and providing clothes, clean bed sheets, and blankets to those who need them.” “We even organized a festival in the centre of Brasov, where we listened to Ukrainians sing and watched them dance. It was open to everyone, both Ukrainians and Romanians,” she recalls. “There, we also organized a jewellery workshop.” 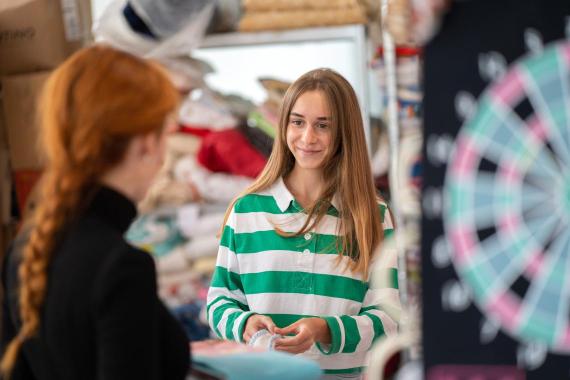 UNICEF/UN0727512/Le Lijour
Despite having started to find new friends and pass the time, volunteering became an important part of Nastia’s life. 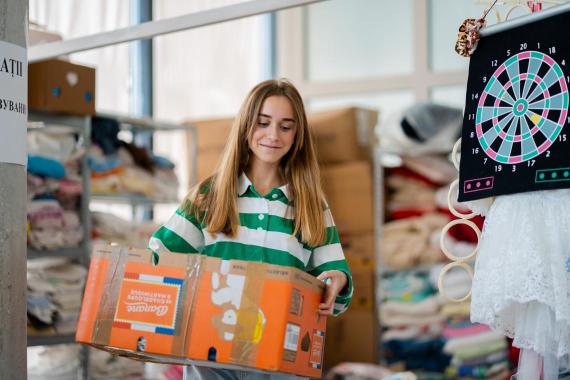 UNICEF/UN0727514/Le Lijour
Nastia is proud of her work as a volunteer at the CATTIA Blue Dot.

“This experience helped me a lot, especially because I have met many friends, even though many of them left now,” she continues. “We used to organize meetings and talk about our life back in Ukraine, how we got here, and about the situation in the country.” Through the group, the teenagers support each other through the challenges they face in Romania.

“I like helping others, it makes me proud of myself. When I volunteer, people thank me, and it makes me feel good. By coming here, I am also helping myself in managing my own situation. Plus, volunteering helped me to improve my English. Now I teach two Ukrainian girls English,” an essential thing because most people speak English in Brasov, she says. 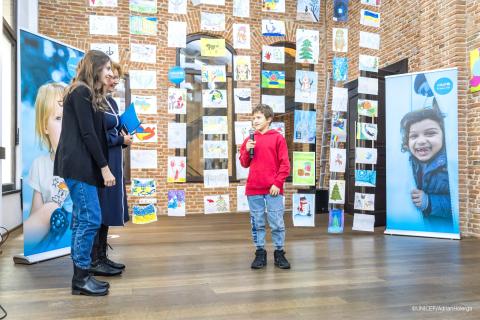 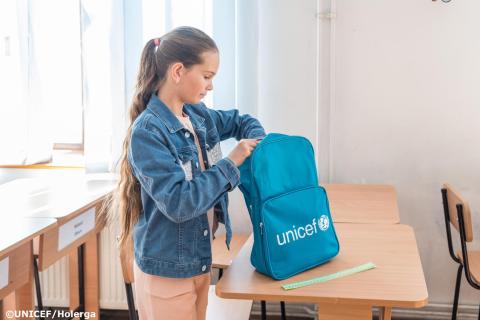 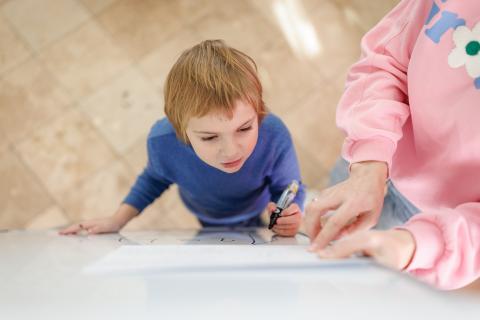 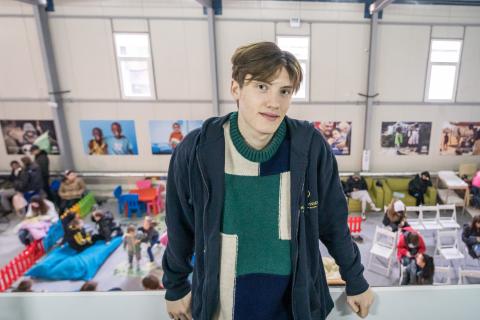 A Stay to Play: an alleviation for families on the move