The courage to move on

The journey is sometimes more important than the destination

‘The world does not end in Stănișești,’ it’s what the school principal of ‘George Apostu’ middle school in Stănişeşti village, Mrs. Mioara Bîru, often tells her students. It is one of the 15 middle schools and 5 high schools in Bacău county in which, through the UNICEF initiative ‘Together for the future’, carried out in partnership with the Ministry of Education, ‘Împreună Agency, Școala de Valori and Holtis Association, teachers and parents joined forces to try to give children equal opportunities to take the path that can fulfill their dreams.

Mădălina is one of the students who just graduated ‘George Apostu’ middle school in Stănişeşti. When we’ve met her, in March, she had just turned 15 and was doing a last-minute revising of her plans towards the destination she set out to reach: the Technical Communication College ‘N. Vasilescu- Karpen’ from the city of Bacău[1].

What may seem easy for other children, for her it is a real adventure that brings her some anxiety. The strongest emotions are however likely hidden somewhere, discreetly, in her mother's heart. Up until last year, she accompanied daily Mădălina to school and she waited there, anxiously for hours, for her daughter to finish safely her school day.

When Mădălina was two years old, she was diagnosed with Lobstein disease, known as  'brittle bone disease’. Her bones can break easily at the slightest blow, and the recovery is long and painful.

She had her first fracture when she was only two months old. The second one at the age of two when she fractured her hand and, three weeks after this accident, she also fractured her leg. When her mother took her to the hospital, “the doctors thought I had mistreated her and beat her. Six doctors, together with the hospital director, came to the ward, in our room, and they told me ‘Your are lying! You mistreated your child! She has both the hand and the leg in plaster’”, the mother says.

To find out what is their daughter’r problem, the parents decided to turn to doctors in the private system. ‘We had a cow with a calf at home. We sold them and we went to the doctors from the private sector’, her mother revealed. There, the doctors noticed the bluish sclera in Mădălina’s eyes, a sign of Lobstein syndrome. Thorough investigations followed that led them to the present diagnosis 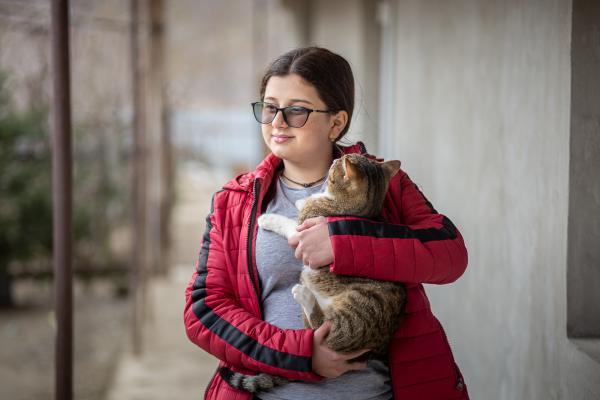 They learned together how to overcome their fears

The start of the 8th grade came with a significant change in Mădălina's life. She began going alone to school.

She remembers that it was icy on the first day, so her mother did take her up to the school door. Every step from the street to the school entrance could pose a real threat to her.

Then, even she was very anxious about it, her mother took the courage she needed to let her daughter go to school on her own and enjoy her adolescence.

It was her mother who decided that it was time to let Mădălina on her own. And this was not an easy decision at all - she was probably encouraged by the parental education sessions she attended at the school, organized through the ‘Together for the Future’ program. They both learned to overcome their fear. They love each other immensely.

The school minibus picked Mădălina up every morning from the front of her house located in the village of Balotești, within Stănişeşti commune.

‘I learned to be on my own. In the past, I used to look out the window in search of my mother each time I wanted to go out to the school yard. Now I have learned to go out of the school alone and walk among my colleagues without having to watch out too much. They are now the ones protecting me’, Mădălina said.

For a short time, due to the pandemic, her school moved online. She had barely gotten used to her new adventure of going alone to school. She received a tablet from school through the microgrant facilitated by ‘Together for the Future’ program, while her family insured she had Internet connection.

‘I used to talk every day with my schoolmates on WhatsApp, so much that we were getting tired of it, but it wasn't the same as talking face to face, at school ... I'm scared by the idea of not going physically to school. Because that's actually what our childhood is all about’, said Mădălina with a bit of a sorrow.

She is happy when she goes to school. ‘I do what a normal teenager does, only that I can't dance and I can't participate in sport classes’.

When there is no room for fear, plans for the future show up

Mădălina participates in the Holtis school clubs supported by the ‘Together for the future’ program. At the dance club, she helps her colleagues dress in the folk costumes, as they need help with some of the accessories. She films the dances, takes photos and participates in organizing the events.

The teachers from her school involved Mădălina in all sorts of activities. ‘I'm happy about it because I know I'm not being left aside’, she said.

Her English teacher sais that she is a creative person and he likes how she manages organising the events. That is why he recommended Mădălina to built her career in this direction.

So she has surpased a lot of her fears. She sees herself in 10 years as an event organizer, living in Bacău. She wants to take her mother with her to the city, to make her life easier than it is in the countryside. Her father has been working in Sibiu for a year now, and comes home only at the weekend. The family waits for him with a lot of eagerness and joy. He phones his children several times a day, but during the week, the mother is left in charge of their household. Only the naughty stripy mare is too much of a handful for a fragile woman like her.

The thought that Mădălina will go to a new school in the autumn, alone, in a big city, worries her a bit. ‘I am little afraid, but I am confident that all will be fine. I trust her because she is a responsible person”, Mădălina’s mother said.

[1] Madalina is now a student of the Technical College of Communications "N. Vasilescu-Karpen", like she wanted 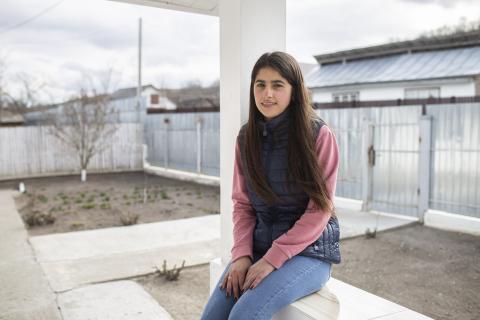 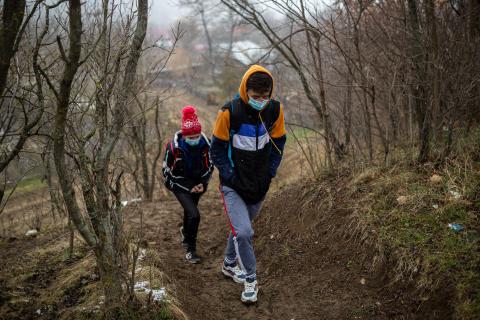 Alexander’s way, over the hills

He had a strong desire to go to school. Other children may have given up. It wasn't easy for someone of his age to start all over again.’ 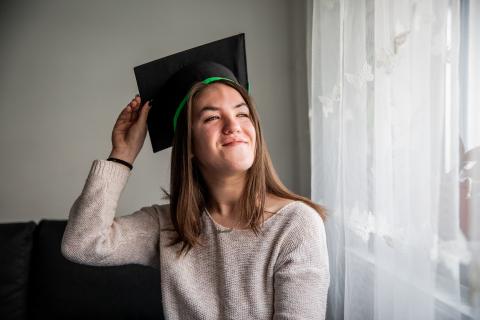 Children from rural Romania have fewer chances to graduate from high-school compared to children from urban areas. A UNICEF program supports them to carry o 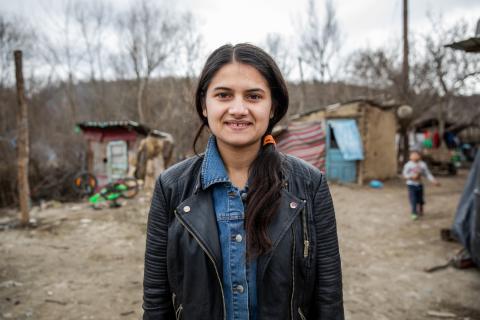