War in Ukraine a 'nightmare for Ukraine’s children' 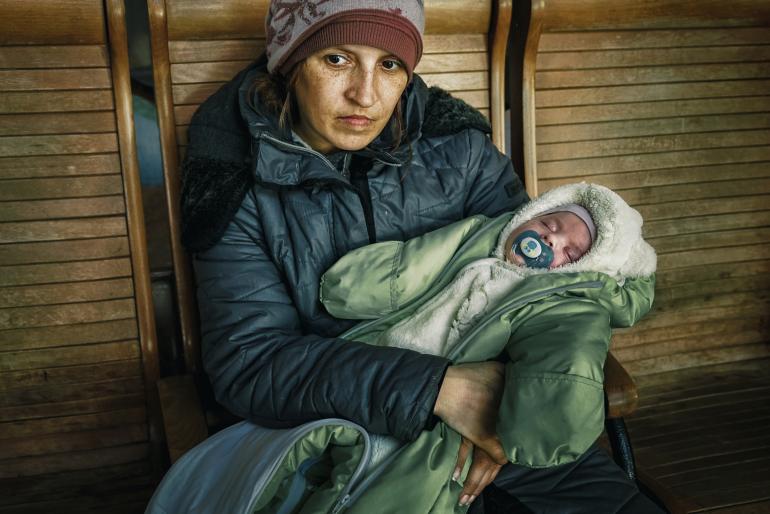 UNICEF/UN0620994/Hrom
On 24 March 2022, Lyuba with her two-month-old child, Dima sit at the Uzhhorod Train station in Ukraine after fleeing conflict.

NEW YORK, 11 April 2022 - "Earlier this morning I briefed the Security Council on the devastating impact of the war in Ukraine on the country’s children – something which I saw firsthand during my mission there last week.

"Over the course of 10 days, I visited Lviv in the west, as well as Vinnystria in central Ukraine, and Dnipro and Zaporizhzhia in the south-east – all to gauge the evolving humanitarian conditions on the ground so that we can adapt UNICEF’s response to meet the growing needs of children and their families.

"More than 4.5 million people, over 90 per cent of whom are women and children, have crossed into neighbouring countries as refugees and IOM estimates that 7.1 million people are now internally displaced and more than 50 per cent of displaced households include children.

"Children are being killed and injured because of the violence around them. The UN has so far verified the deaths of 142 children, with nearly 230 injured. The true figures are most certainly much higher given the scale of attacks. And they have been hurt in the very places where they should be safest – their homes, emergency shelters, even hospitals.

"Attacks using explosive weapons continue in populated urban areas. Homes, schools, hospitals, water systems, power plants, and places where civilians seek shelter continue to come under attack. According to the WHO, there have been more than 100 attacks impacting health care facilities.

"Families are risking their lives to escape. They should not have to do this. As we all saw, Kramatorsk train station in Donetsk oblast was attacked on April 8th, killing dozens of civilians, including children, many of whom were seeking to evacuate to relatively safer areas.

"While visiting Zaporizhzhia in the south-east, I spoke with children and families who had managed to escape areas of intense fighting primarily to the south and east of the town.

"At the intensive care unit, I met 4-year-old Vlad. He had been injured by two bullets to his abdomen. His grandfather told me that Vlad was in a vehicle with ten people when they came under fire. Six people were injured, including Vlad. Thankfully, the doctors think he will survive.

"The head of the hospital told me that since the start of the war, they have treated 22 children who have lost limbs because of the violence.

"The reports of grave violations and other serious rights violations against children are devastating. Children should never be the victims of conflict and must be protected by all parties in accordance with applicable international law.

"And across the country, children are facing severely curtailed access to essential services like health care, protection, water, sanitation and education. The scale and scope of the need for services will only grow as the war drags on and fighting intensifies in other areas.

"UNICEF’s response is evolving to meet the needs of children wherever they may be. We are pre-positioning more supplies in areas across the east where we fear the conflict could worsen. ‘Spilno Centers’ are being established at strategic hubs to support children and families on the move inside Ukraine.

"These integrated services include a space for children to play, staff who can provide some emotional support and other services such as where to get care for existing medical conditions.

"We are also getting cash to 52,000 households to ease some of the impacts of lost livelihoods and setting up life in a new place.

"UNICEF’s US$276M appeal for urgent programmes inside Ukraine and US$73.1M for critical programmes in neighbouring countries are being revised significantly upwards to reflect the rapidly deteriorating humanitarian situation. As of 6 April, there was a funding gap of nearly US$53M for UNICEF’s response inside Ukraine and a US$6.3M funding gap for UNICEF’s response in refugee-hosting countries.

"But humanitarian partners can only do so much. Ultimately, the children of Ukraine urgently need and deserve a peaceful resolution.

"During my appearance before the Council this morning I urged them to work with all parties to: 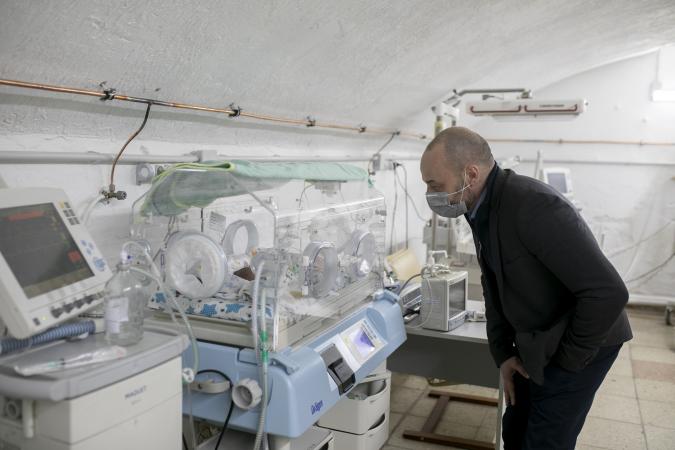 On 31 March 2022, Manuel Fontaine, UNICEF Director for Emergency Operations meets a newborn baby at the Intensive Care Unit for newborns at the Regional Hospital in Lviv, Ukraine.