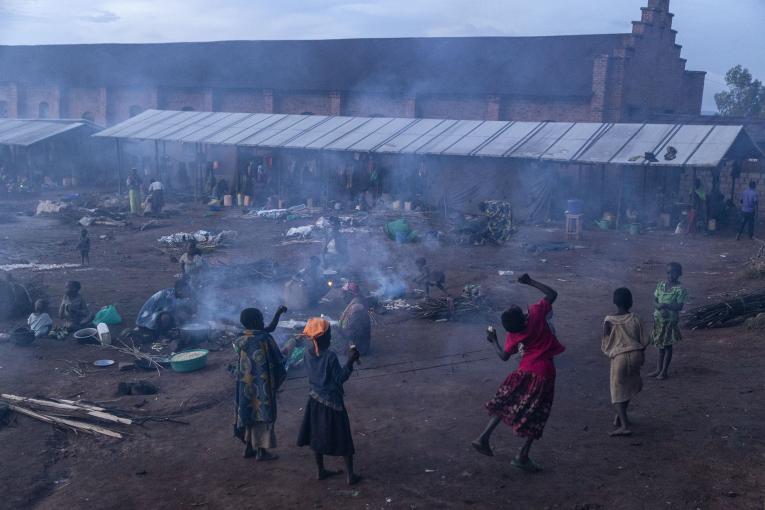 UNICEF/UNI389072/LeMoyne
Thousands of internally displaced people live around the church in Drodro, Ituri, DRC, using it as a sanctuary from the violence that has driven them from their villages.

KINSHASA, 6 October 2020 – UNICEF continues to be deeply concerned about thousands of children at risk amid unrelenting violence in Ituri, eastern Democratic Republic of the Congo (DRC).

Children continue to suffer grievously because of violence and chaos unleashed during longstanding conflict in the province. The violence intensified at the beginning of the year and since then conditions for thousands of children in Ituri have deteriorated further. Militia attacks in populated areas have caused hundreds of deaths, and UNICEF has received reports of children being maimed, killed. or recruited by armed groups. Meanwhile, more than 1.6 million people, the majority of whom are women and children, are estimated to be internally displaced.

According to UNICEF 91 children were killed, 27 were maimed and 13 were victims of sexual violence between January and June 2020. Nearly 18 health facilities have been looted or destroyed, while attacks against more than 60 schools have left around 45,000 children out of the classroom. These are only verified incidents – the actual numbers are likely to be significantly higher.

There are currently 2.4 million people in urgent need of humanitarian assistance in Ituri. More than 150,000 people – including more than 87,000 children – have been assisted by UNICEF and its partners on the ground in terms of healthcare and nutrition, protection, education, water and sanitation between January and August. More specifically, UNICEF and its partners have:

At the same time, however, insecurity in Ituri continues to undermine humanitarian efforts, while insufficient funding limits the scope of activities on the ground. UNICEF’s Humanitarian Action for Children appeal for the DRC is estimated at US$ 318 million but has a funding gap of US$ 235 million (74 per cent)

In the Democratic Republic of the Congo, nurseries provide a safe space for children and babies facing the terrifying prospect of separation from their parents.

W is for work and well-being

When workers’ basic rights are respected, the better their chances of maintaining their mental well-being.