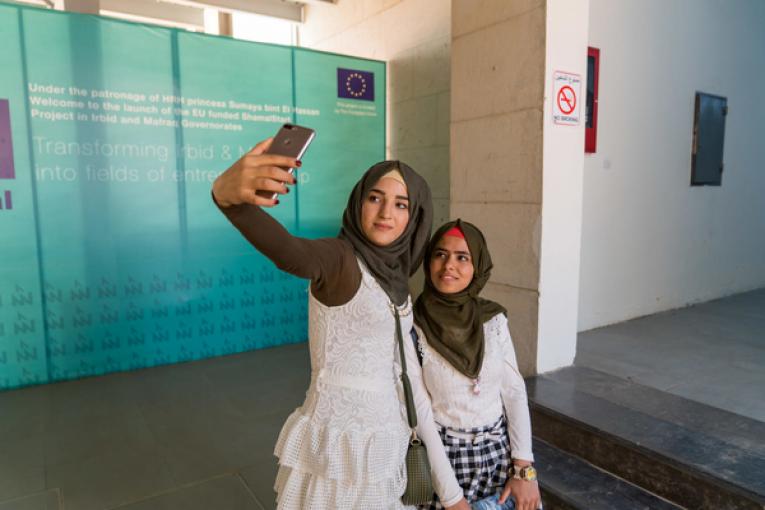 UNICEF/UN0216412/Herwig
18-year-old Siba takes a selfie with her friend, Hyatt. Siba is from Dara’a in Syria and lives in Za’atari Refugee Camp. She joined the Humanitarian Changemaker training programme to find solutions to problems in her community such as early marriage.

The Alliance, which was launched a year ago by UN Women and private sector partners, brings together a range of brands across industries, including some of UNICEF’s existing partners, such as Unilever and Cannes Lions.

“We are pleased to join the Unstereotype Alliance, and to join UN Women and our other partners in taking a stand against gender discrimination and to empower women to help build a gender equal world,” said Gary Stahl, UNICEF's Director of Private Fundraising and Partnerships.

Also at Cannes, young creatives Gerardo Saavedra and Emiliano Salmon were named the 2018 winners of the prestigious Young Lions Health Award, a creative competition for young talent in the communication and marketing industry to submit campaign ideas that can help combat gender stereotypes and highlight discriminatory barriers women and girls face when accessing healthcare.

The wining idea envisions a cartoon-driven social movement called #metoon. As part of the campaign, cartoon heroes would communicate with children to combat gender stereotypes, recognizing that both girls and boys are vulnerable to abuse.

The Cannes Lions Festival is the largest global gathering of the marketing, communications and tech industries. This year, Cannes Lions, UNICEF and UN Women joined forces for the award, which rewards original, attention-grabbing ideas developed by creatives and marketers under the age of 30. The competition received over fifty submissions from all over the world, and was judged by a jury of professionals from the marketing industry, Cannes Lions, UNICEF, and UN Women.

“Every year, this award focuses on a different humanitarian or development theme,” said Louise Benson, Director of the Lions Health Festival. “The common element is that we always mobilize creativity to build a healthier world for children and youth.”

In 2018, for the first time, UN Women is a co-organizer and partner of this award.

Women and girls in developing countries are frequently confronted with a myriad of socio-cultural factors which negatively affect their personal safety and access to appropriate health care services. UNICEF recognizes that everyone has a role to play to reduce barriers and promote the health and wellbeing of all.

UN Women is the global champion for gender equality, working to create an environment in which every woman and girl can exercise her human rights and live up to her full potential. UN Women works to challenge harmful gender-based stereotypes that hold back progress for all, and to empower women. It is present in 90 countries around the world, and works across multiple sectors with a wide range of partners at multiple levels to affect positive change. Under the Unstereotype Alliance, UN Women brings together a wide range of partners from multi-national corporations to advertisers, ad agencies, and others working to eliminate stereotypes from advertising and communications. The initiative is in line with the overall mandate of UN Women to drive the achievement of gender equality globally.

About the Unstereotype Alliance

The Unstereotype Alliance is a thought and action platform that uses advertising as a force for good to drive positive change. It seeks to eradicate harmful gender-based stereotypes. The alliance is focused on empowering women in all their diversity (race, class, age, ability, ethnicity, religion, sexuality, language, education, etc.) and addressing harmful masculinities to help create a gender equal world.

Cannes Lions is the world’s biggest festival and awards for the creative and marketing, communications, entertainment, design and tech industries. All shortlisted ideas from the Young Lions Health Award are posted on the Cannes Lions website. 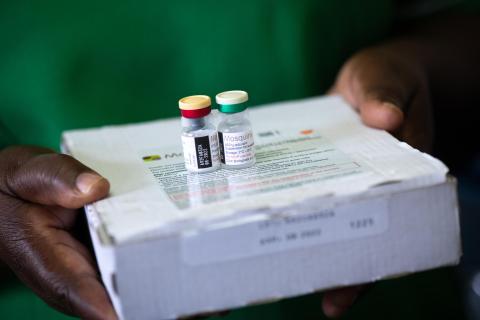