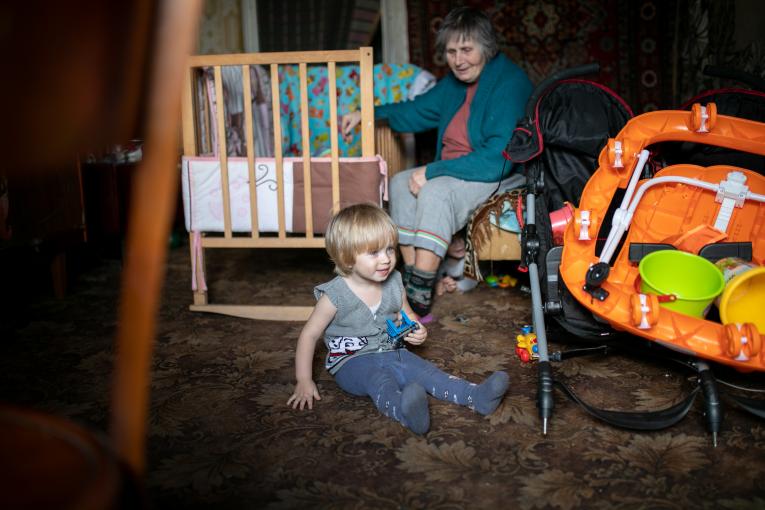 UNICEF/UNI330529/Filippov
Two-year-old Dariy with his grandmother in their home in Krasnohorivka, eastern Ukraine.

GENEVA/KYIV, 22 May 2020 – At a time when children and families in eastern Ukraine are living under COVID-19 related movement restrictions, an increase in shelling has resulted in numerous child casualties and damaged schools in the region, making life even more unbearable for the approximately 430,000 children caught up in the six-year-long conflict, UNICEF said today.

Six children were injured at home after their villages came under shelling during the first week of May alone. One incident severely injured three young girls, two of them sisters, aged 7 and 10 years old and the other a friend, also aged 7.

“I came home and found my two little girls and their friend in the bathroom covered in blood,” Oleksander[i], the father of the sisters, told humanitarian workers at the scene. “They were so scared, they just went inside the bathroom, waiting there until they were discovered.”

In total there have been 10 conflict-related child casualties[ii] since the beginning of this year, with six incidents occurring during the first week of May. This is double the number of child casualties compared to the same time period last year.

There have also been nine attacks[iii] on schools since the beginning of 2020, five occurring in April alone. During one incident, a seventeen-year-old girl was injured by shrapnel while in her schoolyard. This is in spite of the fact that in November 2019 Ukraine became the 100th country to endorse the Safe Schools Declaration, committing to protect education during conflict.

“It is unconscionable that children and families in eastern Ukraine are not only having to cope with the strict lockdown measures all families are struggling with across Europe, but also the constant threat that their homes could come under attack,” says UNICEF’s Regional Director for Europe and Central Asia Ms. Afshan Khan. “After more than six years of deadly conflict children and families in eastern Ukraine urgently need peace. We urge all parties to commit to a ceasefire.”

Families in Ukraine, including those living in conflict-affected areas, have been in lockdown since the end of March, with more than 19,000 cases of COVID-19 confirmed nationwide.

Due to the pandemic, Ukraine’s 2020 school year will be completed remotely, leaving many children living near the ‘contact line’ - where fighting is most severe - with no real way to continue their education, due to limited internet connectivity and access to necessary equipment. The emotional trauma caused by movement restrictions, school closures and isolation will only intensify the already high levels of stress that vulnerable children who live in the frontline communities have to contend with.

Across eastern Ukraine, UNICEF provides hundreds of thousands of children, young people and caregivers with psychosocial support, counselling on violence and mine risk education. UNICEF also helps to repair damaged schools and kindergartens and provides vital water and sanitation supplies and facilities. UNICEF’s work in eastern Ukraine has further expanded due to COVID-19, this includes working closely the Ministry of Education and Science to provide distance learning and support to parents, caregivers and teachers during lockdown measures. In April, UNICEF procured medical, protective and hygiene supplies for 19 hospitals in eastern Ukraine.

UNICEF is currently appealing for US$23,000,000 for COVID-19 response in Ukraine in addition to an existing humanitarian appeal of US $9,800,000 to support families with children in the conflict-affected East. As of yet, only 27 per cent of the 2020 Humanitarian Appeal for Children has been funded.

[i] name changed to protect identity

[ii] OHCHR Ukraine Statement Protection of civilians in the conflict zone, May 2020 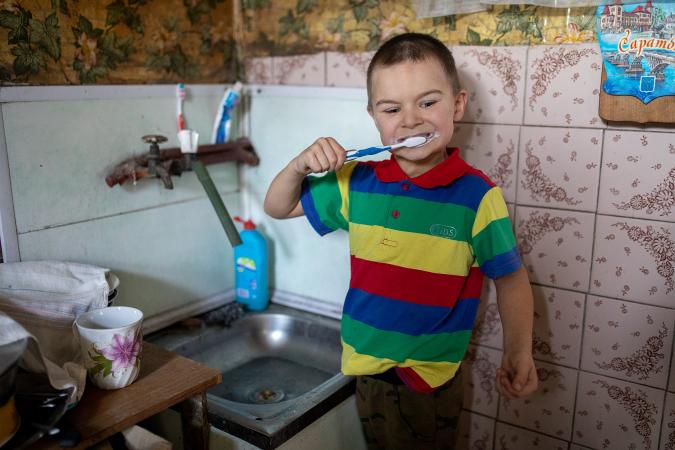