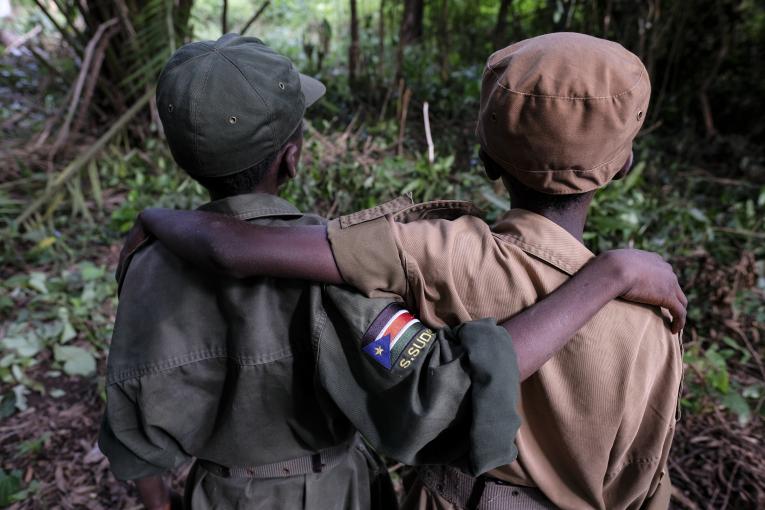 UNICEF/UN0202141/Rich
On 17 April 2018 in Yambio, South Sudan, [NAMES CHANGED] (right-left) Ganiko, 12 yrs, and Jackson, 13 yrs, stand during a ceremony to release children from the ranks of armed groups and start a process of reintegration. Jackson and Ganiko were best friends when they served together with the armed group.

NEW YORK, 15 May 2018 – “From the Central African Republic to South Sudan, and from Syria to Afghanistan, attacks on children in conflict have continued unabated during the first four months of the year.

"With little remorse and even less accountability, parties to conflict continue to blatantly disregard one of the most basic rules in war: the protection of children.

"No method of warfare has been off-limits, no matter how deadly for children: Indiscriminate attacks on schools, hospitals and other civilian infrastructure, abductions, child recruitment, besiegement, abuse in detention and denial of humanitarian assistance were all too commonplace.

"In Yemen, for example, more than 220 children were allegedly killed and over 330 were injured since the beginning of the year as a result of the conflict. Nearly 4.3 million children are now at risk of starvation, a 24 per cent increase over 2017 levels. An acute watery diarrhoea and cholera outbreak which killed more than 400 children under the age of five last year is threatening to claim even more young lives as the rainy season begins and hygiene conditions deteriorate further.

"In Syria, hopes for peace remain dim. More than 70 attacks on hospitals and health facilities were verified during the first three months of the year, denying children and families vital health services. Over 300 education facilities have been attacked since the beginning of the conflict. Some 5.3 million children have been internally displaced or became refugees, and nearly 850,000 children continue to live in besieged or hard-to-reach areas.

"In Gaza, we have seen children killed and injured in protests since early March, with reports on Monday of more child casualties in what is said to be the deadliest day of violence since the 2014 Gaza war.

“In Bangladesh, more than 400,000 Rohingya refugee children who survived recent atrocities in Myanmar need humanitarian assistance. As the monsoon season approaches, the risk of cholera and other waterborne diseases is higher than ever.

"In South Sudan, the first country I visited as UNICEF Executive Director, at least 2.6 million children have been forced to flee their homes. More than 1 million children are acutely malnourished including over 250,000 severely so and at increased risk of death. Although close to 600 children have been released from armed groups so far this year, around 19,000 continue to serve as fighters, messengers, porters, cooks and even sex slaves for the warring parties.

"In Afghanistan, more than 150 children were reported killed and over 400 injured during the first three months of the year because of the conflict.

"In the Central African Republic, renewed violence over the past few months has forced nearly 29,000 children to flee their homes, bringing the total number of internally displaced children close to 360,000. More than 2 in 5 children under the age of five suffer from chronic malnutrition and one third of school-aged children are now out of school.

"In all these countries and many more, committed teams from UNICEF and partners are doing all they can to alleviate the suffering of the most vulnerable, those separated from their families, terrified and alone, those getting sick in densely populated refugee camps, those on the move in monsoon and unrelenting dry seasons, those who are starving.

“Despite funding shortfalls – we have only received 16 per cent of our funding needs for this year – we are resolutely committed to serving the most vulnerable. We are vaccinating children, treating them for malnutrition, sending them to school, providing them with protection services, and trying to meet their basic needs.

“Humanitarian aid alone is not enough. Children need peace and protection at all times. The rules of war prohibit the unlawful targeting of civilians, attack schools or hospitals, the use, recruitment and unlawful detention of children, and the denial of humanitarian assistance. When conflicts break out, these rules need to be respected and those who break them need to be held to account. Enough is enough. Stop attacks on children."

17-year-old Fatema's story is devastating. She was forced to flee her home, her husband was killed and she was raped. She doesn't know if the father of her unborn child is her deceased husband or the soldier who raped her.

More information on UNICEF's work for children affected by conflict