Geneva Palais briefing note on the situation of children in Afrin and Eastern Ghouta, Syria 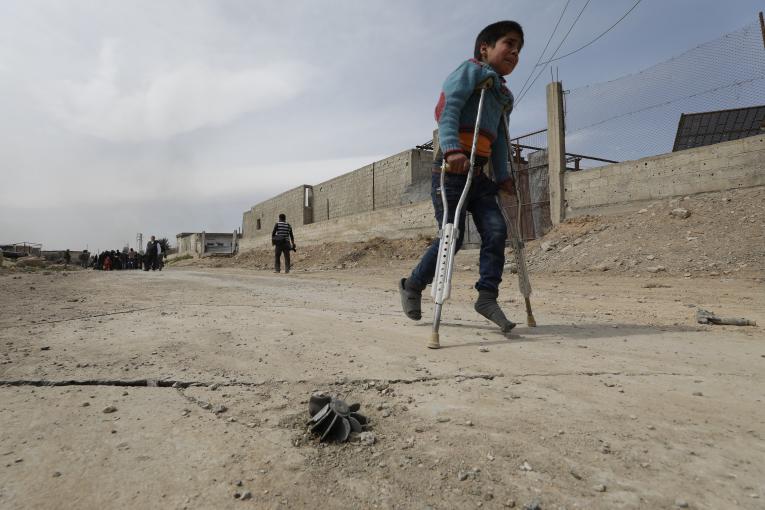 GENEVA, 20 March 2018 - This is a summary of what was said by Marixie Mercado, UNICEF spokesperson in Geneva – to whom quoted text may be attributed – at today's press briefing at the Palais des Nations in Geneva.

It is now 20 days since we were last able to deliver health and nutrition supplies to Afrin district. Since March 6, people in Afrin city have suffered from severe water shortages as the source of water to Afrin city was reportedly damaged by fighting. UNICEF-supported water trucks have stopped delivering much needed safe water to vulnerable areas in the city since March 15 due to the escalation of violence.

UNICEF is responding to the immediate needs of about 20,000 families who have been displaced to villages surrounding Afrin, but there are still an estimated 100,000 people, half of whom are children, in Afrin district – and they too need urgent humanitarian assistance. UNICEF and partners are ready and able to provide this assistance, including medical items that are said to be in short supply.

We estimate that around 45,000 – 50,000 people have been evacuated from East Ghouta since March 13, about 70 per cent of them women and children. Reports indicate that tens of thousands still wait at exit points to be transported to collective shelters.

Some of these locations were designed as collective shelters. Other schools and educational facilities that are also being used as shelters have broken doors and windows, and non-functional water and sanitation facilities. UNICEF has been able to repair some of the toilets and is installing prefab toilets where needed, but water and sanitation continues to be an immense challenge. In one of these shelters, waiting lines for toilets was said to be almost 3 hours.

There is a palpable sense of relief – especially among the children. They arrive hungry and exhausted – but the sound of their laughter fills the yards of the shelters. One girl wondered at the price of biscuits – 50 Syrian pounds (10 cents), compared to 300 (60 cents) in Hamourieh. A six-year-old boy described breakfast, saying that some days, back in his village of Kafr Batna, they would not eat at all. A 12-year-old boy from Hamourieh is being treated for wounds sustained when a shell hit their home the day before they evacuated. Mohammed, 12 days old, has seen and felt the sun for the very first time. The children said how much they wanted to go back to school, and described how, when schools would open in east Ghouta, they would go to their classes at 5 a.m., before the sun, was out, and return at 8, before the fighting started.

UNICEF is distributing water to people waiting at the exit points of East Ghouta, and providing water trucking and water bottle distribution to almost all the collective shelters currently hosting IDPs. We have multiple mobile health and protection teams providing basic medical assistance, vaccinations and health and nutrition services. We need to provide blankets, clothing and baby kits to families who came with almost nothing or nothing. And as quickly as possible, we need to help children get back into classrooms and catch-up with their learning.

Yesterday, UNICEF supplies delivered through the Syrian Arab Red Crescent also reached the newly accessible East Ghouta towns of Kaft Batna, Saqba and Hamourieh. High-energy biscuits and bottled water were delivered to them alongside food parcels and bread from the ICRC.

While we are working to deliver assistance to children and families who have exited Afrin and East Ghouta, thousands more remain inside Afrin and in besieged locations in East Ghouta. These children are still under attack and in dire need of assistance. We must be able to reach those children as well, and we call on parties to the conflict to allow us to reach them with unconditional, safe and sustained access. Wherever they are, and regardless of whose control they live under, children have the right to humanitarian assistance.