Over 160,000 displaced children protected from harsh winter in Iraq

NEW YORK/BAGHDAD, 7 February 2019 – As cold winter weather sweeps across Iraq, UNICEF has provided warm clothes to over 160,000 internally displaced and refugee children, including those in hard-to-reach areas such as Sinjar, where UNICEF has maintained a strong presence since violence escalated in 2013.

“Although fighting has subsided in Iraq, an estimated 1.85 million people, including 825,000 children, remain displaced,” said Henrietta Fore, UNICEF Executive Director. “One-third of all displaced children live in camps, in poorly insulated tents, often with no winter clothes or shoes. These children have little protection against flooding and the bitter cold, putting them at risk of illness, hypothermia and death.”

As part of UNICEF’s winter response, over 100,000 displaced children in camps in Anbar and in and around Mosul received supplies to keep them warm. Winter support has also included vulnerable Syrian refugees through the innovative use of vouchers.

In mountainous areas like Sinjar, temperatures drop below freezing, exposing children and pregnant mothers – many of them living in camps - to the elements. UNICEF is helping keep these vulnerable minorities warm: Nearly 50,000 Yazidi children and over 2,500 pregnant Yazidi mothers living in the area received coats, boots, hats, gloves, sweaters and trousers.

“We all need to do the best we can to make sure that vulnerable families do not spend another winter out in the cold in camps or in temporary shelters,” Fore said. “Now that the violence has subsided, and a new government is in place, Iraq has a unique window of opportunity to rebuild the country for all its children, so that they can live in peace and harmony.” 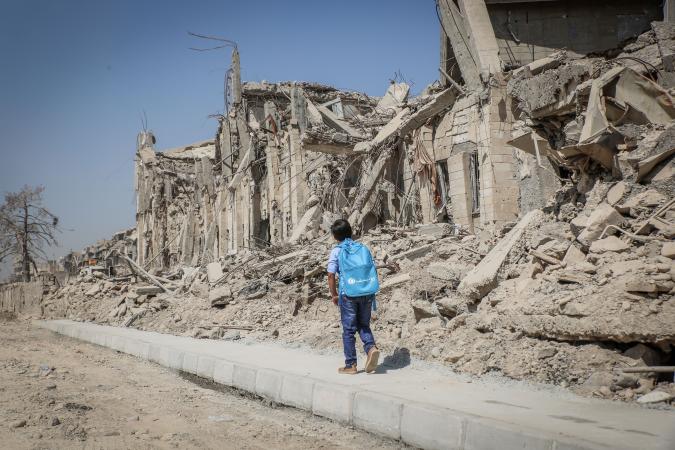 On 26 September 2018 in West Mosul, Iraq, neighbours Ali, 11, and Farah (not pictured), 13, attend the UNICEF-supported Ithar School which runs a shift for boys and a shift for girls.